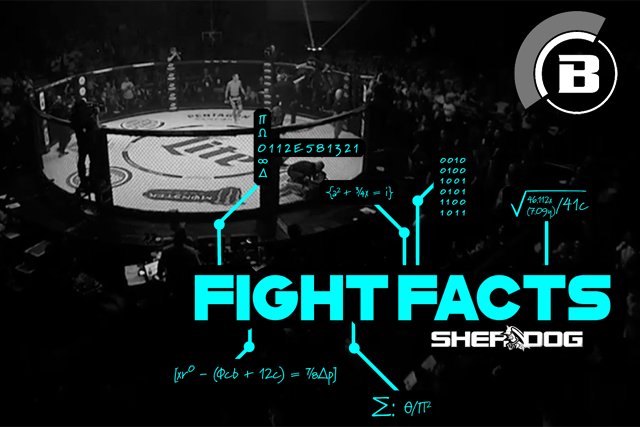 Fight Facts is a breakdown of all the interesting information and cage curiosities on every card, with some puns, references and portmanteaus to keep things fun. These deep stat dives delve into the numbers, providing historical context and telling the stories behind those numbers.

Heading to South Dakota for the first time, Bellator MMA on Friday brought incredible action to the Sanford Pentagon in Sioux Falls. Bellator 204 featured fireworks from start to finish, becoming one of the most knockout-heavy cards in company history. Plus, a fighter learned the hard way why he should not miss weight by almost 15 pounds, and a main card competitor represented a song most commonly attributed to an Ultimate Fighting Championship legend.

FIGHTIN’ AROUND THE WORLD: In staging an event in South Dakota, Bellator has now touched down in 33 states across the continental United States -- only five fewer than the UFC. However, Bellator has visited Kansas and West Virginia, two states to which the UFC has never traveled. Bellator also held a small untelevised show at a NASCAR race in Alabama in 2017, but the Monster Energy Fight Series falls in its own category of events.

SMORGASBORD OF STRIKING: Bellator 204 featured seven first-round knockouts, which tied Bellator 199 for the most in company history. This event, however, was comprised of 13 fights, compared to a whopping 19 bouts at Bellator 199.

RIGHT LEG, HOSPITAL, LEFT LEG, CEMETERY: Head kicks led to two knockouts at Bellator 204, courtesy of Ricky Bandejas and Omar Antonio Morales Ferrer. It was the second event in the promotion’s history -- Bellator 76 in 2012 was the first -- to see multiple fighters get knocked out with head kicks.

DOUBLE YOUR PLEASURE: With two fighters losing by knockout due to elbows, Bellator 204 became the second event in company history to feature multiple fighters succumbing to elbows. This first was Bellator 154 in 2016, when Stephanie Frausto and Evangelista Santos lost by TKO due to elbow strikes and punches.

I KINDA LIKE IT HERE: Returning to featherweight for the first time since 2014, current Bellator bantamweight champion Darrion Caldwell won by knockout in the main event and stayed undefeated in the 145-pound weight class at 7-0. His only career loss came in a catchweight bout after opponent Joe Taimanglo missed weight by two pounds. Caldwell avenged the defeat less than five months later.

COOL STORLEY, BRO: When he knocked out A.J. Matthews in the second round of their co-main event, Logan Storley remained undefeated at 9-0. He has stopped his opponent in seven of those victories, and all of his finishes have resulted in knockouts within the first two rounds.

OFFICE AT THE PENTAGON: Of Storley's nine career fights, four have been contested at the Sanford Pentagon in Sioux Falls, South Dakota, just a two-hour drive from his home town of Webster. However, the four fights have taken place under three different promotional banners: Resurrection Fighting Alliance, its successor Legacy Fighting Alliance and now Bellator. All four have resulted in TKO wins for Storley.

SWEET CHIN MUSIC: Bandejas bounced James Gallagher from the ranks of the unbeaten with a dramatic first-round knockout after connecting with a side kick to the Irishman’s face. In Bandejas’ 12 career bouts, four have ended by knockout, four by submission (including his only loss) and four by decision.

NO GLIB REMARK: Prior to his middleweight bout with Romero Cotton, Willie Whitehead missed weight by 14.2 pounds by hitting the scales at 200.2 pounds. He lost by first-round knockout. No fighter who missed weight and came in at least 10 pounds heavier than his or her opponent has ever won inside the Bellator cage.

… AND WE COULDN’T EVEN SEE IT: Making his professional debut against highly touted -600 favorite Micah Peatrowsky on the untelevised prelims, Keith Phathaem managed to spring an upset as a +400 underdog by beating Peatrowsky by decision.

NEVER SAY NEVER AGAIN: Entering Bellator 204, Caldwell had never won a fight in the second round (11 wins), Ferrer had never knocked out anyone (six wins) and Bryce Logan had never lost a fight that went to the scorecards (five decision wins).

ONLY DARKNESS, EVERY DAY: According to MMAJunkie.com, Tywan Claxton made his walk to the Bellator cage accompanied by DMX’s “No Sunshine” from the “Exit Wounds” soundtrack -- a song famously used by longtime UFC middleweight champion Anderson Silva -- and emerged victorious against Cris Lencioni. Inside the Octagon, the song celebrates an impressive winning percentage of .706.