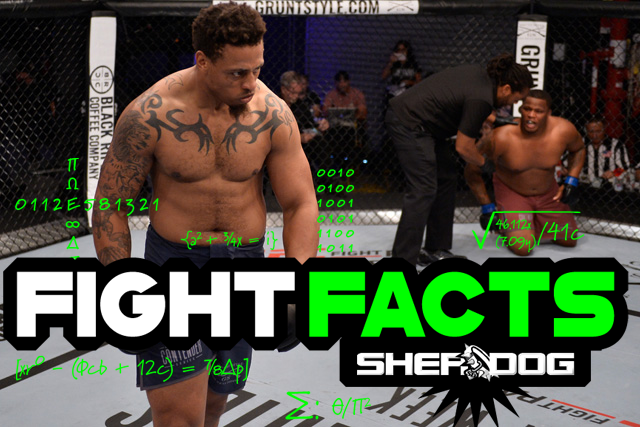 Fight Facts is a breakdown of all of the interesting information and Octagon oddities on every card, with some puns, references and portmanteaus to keep things fun. These deep stat dives delve into the numbers, providing historical context and telling the stories behind those numbers.

The second season of Dana White's Tuesday Night Contender Series delivered incredible action from start to finish. After eight events, the promotion featured a finish rate far above several other major MMA organizations, almost half of the fights ending in the first round, and the equally impressive statistic that not a single fighter missed weight.

Must See TV: With 33 finishes in 40 fights, the second season of the Contender Series served up an incredible finish rate of 82.5%. This finish rate is higher than every Zuffa organization, Bellator MMA, Invicta FC, WSOF/PFL, LFA, Rizin FF, and even the short-lived Affiction promotion.

That Was Then, This Is Now: While the first season had one event, DWTNCS 3, where all five fights ended in stoppage, one bout ended due to an injury and another on the doctor’s advice. In the second season, four of the eight events each featured a full night of stoppages with no doctor intervention.

All on the Line: 30 undefeated fighters appeared on Season 2 of the Contender Series, and 17 made it through with that record intact.

Contract Killers: All four events of the second half of the second season of the Contender Series awarded at least three contracts to the victors at each event. While the most contracts in a single event offered in the first season was three plus a developmental deal, two events in Season 2 (DWTNCS 10 and 15) gave four of the five winners contracts. Additionally, DWTNCS 14 awarded three contracts plus a developmental deal.

Dana Must Be Thrilled: While only one event in the first season awarded more than two contracts (DWTNCS 8), six of the eight events of Season 2 ended with three or more fighters getting signed.

Feeding Frenzy: Dana White’s Tuesday Night Contender Series Season 2 ended up awarding 22 full contracts, two developmental deals, and one placement on the upcoming season of The Ultimate Fighter. In comparison, 16 fighters were given a UFC contract in Season 1, with one extra earning a developmental contract where he returned in Season 2 to win and get a spot in the UFC.

Feed Me, Seymour: 15 of the 40 victors this season had their most recent bouts in the LFA prior to appearing on the Contender Series, with 13 of those 15 signed in some fashion.

If at First You Don’t Succeed: To date, 12 fighters have competed twice on the Contender Series, with seven earning a UFC contract on their second appearance, and one other earning a developmental deal.

Favorite Son (or Daughter): Of the 40 bouts to take place on this second season of Dana White’s Tuesday Night Contender Series, eight betting underdogs won their bouts, with three closing at even odds. Of those upsets, four of the losing fighters held odds favoring them above -300.

The Heaviest of Hitters: All 9 heavyweight bouts in Contender Series history have ended by knockout, with six of those coming this season.

Stretch Armstrong Over Here: Three fighters appeared on the Contender Series Season 2 with 10-plus inch reach advantages over their opponents, and all three prevailed – Kevin Holland, Alex Munoz, and Kennedy Nzechuwku.

Punching Down: All four fighters that measured at least five inches taller than their opponents won in this season of the Contender Series.

IT’S ALL OVER: Clocking in with just under 18 minutes of fight time, the final event of Season 2 of the Contender Series was the quickest in promotional history. Featuring five stoppages, no fight went beyond two minutes of the second round. The event sharply contrasted with Season 1’s finale episode, the longest in the promotion, which featured over 60 minutes of total fight time.

Tough Luck: First appearing at DWTNCS 1, Greg Rebello lost by knockout and then returned the second season for another shot, only to be knocked out again at DWTNCS 11. Rebello is the only fighter in series history to lose twice, and he retired after his second loss in the promotion.

Never Say Never Again: Coming into their respective bouts in Season 2 of the Contender Series, 12 fighters had never been stopped, 15 had never suffered a knockout loss, and two had never lost by submission.

Jay Pettry is an attorney and a statistician. Writing about MMA since he started studying the “Eminem Curse” in 2012, and writing for Vice Sports and Combat Docket along the way, he put together many fight result and entrance music databases to better study the sport. You can find him on twitter at @jaypettry.