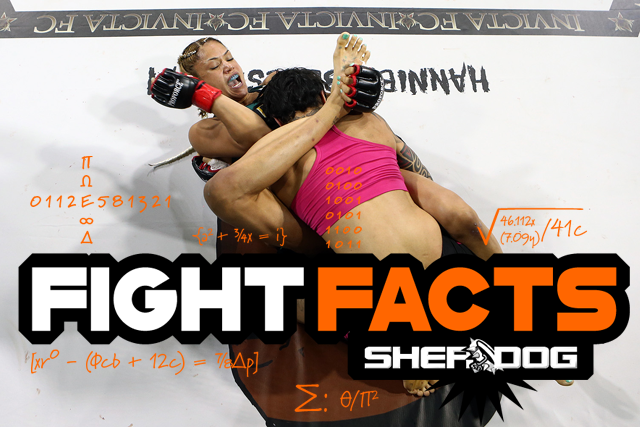 Fight Facts is a breakdown of all of the interesting information and cage curiosities on every card, with some puns, references and portmanteaus to keep things fun. These deep stat dives delve into the numbers, providing historical context and telling the stories behind those numbers. * * *

Returning to the Scottish Rite Temple in Kansas City, Missouri, for the third time in as many events, Invicta Fighting Championships brought with it a card chock full of rising stars. Invicta 31 on Saturday featured an undefeated powerhouse who appears dead set on defending her title in perpetuity, a 21-year-old prospect who has already tied the promotional record for most submissions and the rarest form of a draw.

PUT THE STRAWWEIGHTS ON NOTICE: Pushing her undefeated record to 14-0 with a second-round submission of Janaisa Morandin, Virna Jandiroba has submitted 11 of those opponents, 10 of them inside the first two rounds.

ANSWER THE TELEPHONE: By submitting Morandin with an arm-triangle choke, Jandiroba became the first fighter in Invicta history to ever win with that maneuver.

ALL SHAPES AND SIZES: In her first three career bouts, Lisa Spangler has won by decision in three different ways. She followed a unanimous decision and a majority decision with a split decision over Shanna Young.

ELBOW DEEP INSIDE THE BORDERLINE: Bouncing back from adversity in the first round, Mallory Martin earned a third-round stoppage against Ashley Nichols due to elbow strikes. Martin became the third fighter in Invicta history to put away an opponent only with elbows.

SHE FEELS THE NEED, THE NEED FOR SPEED!: By pulling off an armbar on Victoria Leonardo, Miranda Maverick earned her third submission win in Invicta, tying Amber Brown, Sarah D'Alelio and Tonya Evinger for the most in company history. As all three of her submissions have come in the first round, Maverick also tied Brown for the most first-round submission victories.

ARMS DEALING: After Maverick’s armbar victory, armbars account for just under 35 percent of all submissions inside the promotion. There have been more armbars performed than every other type of submission combined other than rear-naked chokes.

EVERY KO BEGINS WITH KAY: Kay Hansen’s technical knockout of Helen Peralta at 4:16 of the third round was the sixth-latest stoppage and second-latest knockout ever in an Invicta non-title fight.

BACK TO THE DRAWING BOARD: The bout between Audrey Wolfe and Holli Salazar was scored a unanimous draw after Wolfe was deducted a point in the third round because of a headbutt. It was the first such draw in Invicta history and only the second draw of any kind in the promotion. An incredibly rare occurrence, the only two unanimous draws in Ultimate Fighting Championship history both occurred when the fighter who would have won lost a point due to a foul.

IT SPEAKS FOR ITSELF: Invicta 31 was the 25th event in company history to feature a fight outside of a standard weight class, as Martin missed weight in advance of her strawweight bout with Nichols. Over 80 percent of all Invicta events have featured either at least one fighter missing weight or a scheduled catchweight bout.

NEVER SAY NEVER AGAIN: Coming into Invicta 31, Morandin had never been stopped (11 fights), Nichols had never been knocked out (five fights) and no Invicta event had ever started off with a draw.

NOTHING SEEMS TO SATISFY: Whether it was in error or intentional, both Martin and Spangler were accompanied to the cage and their respective fights by “Stinkfist” from Tool. Both women emerged victorious.