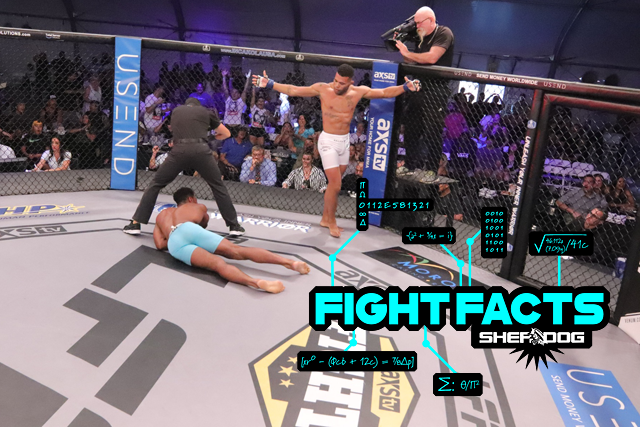 Heading back to The Golden State for the fourth time, the Legacy Fighting Alliance on Friday brought a wildly entertaining card full of exciting and violent finishes to the Morongo Casino Outdoor Pavilion in Cabazon, California. LFA 45 tied for the most finishes at a Legacy Fighting Alliance event, the first armbar submission in an LFA headliner and the coronation of the promotion’s king of elbows.

DOGS AND CATS LIVING TOGETHER, MASS HYSTERIA: All seven of the bouts shown on AXS-TV at LFA 45 ended via stoppage within the first two rounds. LFA 45 tied LFA 35 for the most finishes at an event with 10; however, it should be noted that LFA 35 had 13 bouts on its card, while LFA 45 had just 11.

BRIGHT FUTURE AHEAD OF HIM: A veteran of 15 bouts inside the Ultimate Fighting Championship before making his LFA debut, Erick Silva held the most amount of Octagon experience of any fighter to ever compete for the organization by far. Other notable UFC vets to later compete for LFA include Chico Camus (eight UFC bouts), Daniel Pineda (seven) and Johnny Bedford (six).

SKY’S THE LIMIT: After getting dropped by Nick Barnes, Silva gathered himself and snagged an armbar in the first round. In the process, he became the first fighter in LFA history to armbar his opponent in the main event.

ALSO CANNONPROOF: All eight of “Bulletproof” Blake Troop’s wins have come by first-round stoppage following his knockout out James Cannon.

MACHO MAN: By knocking out Luc Bondole with elbows and punches, Taylor Johnson recorded the fifth elbow-related stoppage in LFA history. It was his second finish via elbows, leaving him as the only fighter in promotional history to finish multiple fighters with elbows.

HEAD KICK BALLET: Kailin Hill knocked out Alex Thompson with a series of head kicks in the first round of their bout, becoming the first fighter in LFA history to knock out an opponent with multiple head kicks. It was the ninth knockout stemming from a head kick in promotional history.

NOT PAID HOURLY: When he submitted Cameron Underhill with a guillotine choke in 31 seconds, Natan Levy equaled the third-fastest submission in LFA history. Only Cameron Miller (29 seconds) and Mitch White (24 seconds) have executed faster submissions.

THE BIG FIVE-OH: By tapping Dejon Daniels in the first round, Herdem Alacabek picked up the 50th rear-naked choke finish in LFA history -- the most of any type of submission by a wide margin. Rear-naked chokes account for 41 percent of all submissions in the promotion.

THE HERD IS THE WORD: Alacabek has finished all five of his opponents within the first two rounds. He remained undefeated after submitting Daniels.

NEVER SAY NEVER AGAIN: Entering LFA 45, Jordan Winski had never been knocked out (10 fights), Carlos Puente Jr. had never been stopped (seven fights) and no fighter in LFA history had opted not to answer the bell between rounds; Casey Ryan elected not to continue after the second round of his encounter with Moses Murrietta.