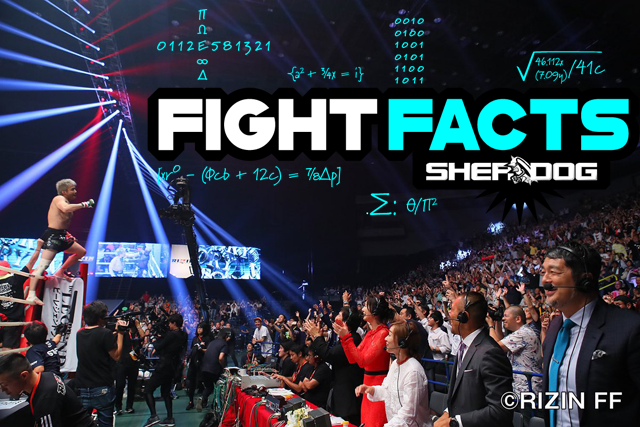 Fight Facts is a breakdown of all the interesting information and ring rarities on every card, with some puns, references and portmanteaus to keep things fun. These deep stat dives delve into the numbers, providing historical context and telling the stories behind those numbers.

Rizin Fighting Federation on Sunday returned to its Saitama, Japan, home for the ninth time in 13 events and brought a card with several promotional staples to the Saitama Super Arena. Rizin 11 featured the organization’s four winningest fighters, a man who has missed weight in six of his past 10 bouts and the first elbow-induced stoppage in the company’s history.

THE TIMES, THEY ARE A CHANGIN’: Despite the fact that Pride Fighting Championships never staged a single women’s bout, founders Nobuyuki Sakakibara and Nobuhiko Takada realized the potential of those divisions when they created Rizin. The main event featured a rematch between Kanna Asakura and Rena Kubota inside the women’s atomweight division. It was Kubota’s eighth appearance in the promotion, most on the all-time list.

BEST FOOT FORWARD: At Rizin 11, the organization featured the four fighters who have competed the most inside its ring. While Kubota holds the record for most appearances with eight, Asakura, Kyoji Horiguchi and Jiri Prochazka, all with seven, are in a three-way tie for second. Those four fighters also happen to be the four winningest competitors in the company’s history.

RESERVED FOR VIOLENCE: By taking Kubota the distance, Asakura became the second fighter to win by decision in a Rizin main event. The other 11 shows all featured finishes in their respective headliners, with Tatsuya Kawajiri as the only other fighter to win on the scorecards. He outpointed Anthony Birchak at Rizin 5 in April 2017.

A MAN POSSESSED: Since choosing not to re-sign with the Ultimate Fighting Championship, Horiguchi has gone 7-0 inside the Rizin organization and currently owns a 10-fight winning streak. His victory over Hiromasa Ogikubo gave him the most wins (seven) in Rizin history.

MELVIN, MELVIN, MELVIN …: After losing to Takanori Gomi by first-round knockout, Melvin Guillard has not won a fight since he knocked out Gesias Cavalcante at World Series of Fighting 11 in 2014. The drought covers nine bouts, with eight losses and one no-contest -- the latter result of Guillard’s positive test for a banned substance.

WHAT WE’VE GOT HERE IS FAILURE TO COMMUNICATE: In his last 10 fights, Guillard has missed weight six times and has needed a 179-pound catchweight in another. Guillard missed weight for his bout with Gomi by three pounds. In doing so, he started the fight by drawing a red card, which reduced his purse by 50 percent and significantly lowered his ability to win a decision.

IT’S COMPLICATED: Throughout Satoru Kitaoka’s lengthy 67-fight career, he has never won by knockout but has submitted his opponent in nearly half (20) of his wins (41). On the other hand, Kitaoka has never been submitted, while almost half (eight) of his losses (17) have come by knockout following his first-round KO defeat to Diego Brandao. He also has nine draws on his ledger.

I MOUSTACHE YOU A QUESTION: By forcing Tom Santos to tap to strikes at 4:11 of the third round, Daron Cruickshank became the first fighter in Rizin history to stop a fighter with elbows. He also became the second fighter to make his opponent tap to strikes -- a result that first occurred when Fedor Emelianenko made Jaideep Singh tap to punches on New Year’s Eve in 2015.

NEVER SAY NEVER AGAIN: Coming into Rizin 11, Kubota had never lost an MMA bout by decision (eight fights), Santos had never been stopped with strikes (14 fights) and Shoma Shibisai had never fought beyond the first round (six fights).

GOTTA STAY ON MY GRIND: Horiguchi once again made his walk to the ring accompanied by “My Time” (Fabolous ft. Jeremih). He has walked out to that song in every one of his Rizin and UFC appearances. With the track, Horiguchi has amassed an outstanding record of 14-1.