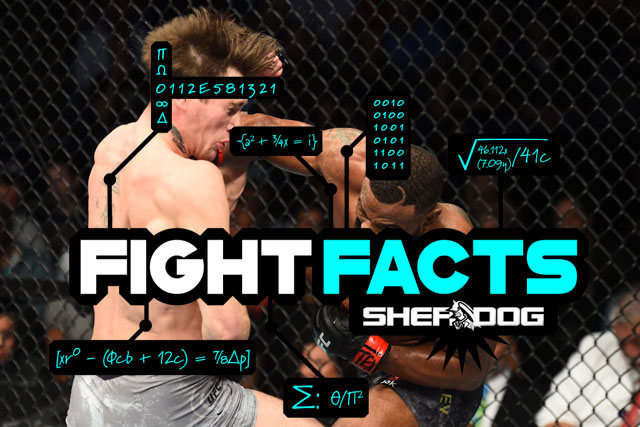 Fight Facts is a breakdown of all of the interesting information and Octagon oddities on every card, with some puns, references and portmanteaus to keep things fun. These deep stat dives delve into the numbers, providing historical context and telling the stories behind those numbers. * * *

For its 450th event, the Ultimate Fighting Championship on Saturday brought an electrifying show to Dallas, with UFC 228 expected to be in consideration for “Event of the Year” in a few months. The card featured the most Octagon appearances for both a male and female fighter, the first brabo choke in UFC championship history and a unique submission we had only seen once before pulled off twice in the same night.

MILESTONED: Calling the action with Jon Anik and Daniel Cormier, UFC 228 was Joe Rogan’s 250th UFC event. Rogan made his debut at UFC 12 handling backstage interviews, a position he held for several events until he made his commentary debut at UFC 37.5 in 2002. Rogan even served once as the play-by-play commentator at UFC 42, where he was joined by former UFC fighter Phil Baroni on color commentary.

SOMETHING IN THE WATER: Three fighters that lost by knockout at UFC 228 had never before been stopped with strikes: Karolina Kowalkiewicz, Niko Price and Charles Byrd.

GO OUT WITH A BANG: Each of the UFC’s last five main events have ended by stoppage within two rounds, and a “Performance of the Night” bonus awarded to each victor.

DON’T JINX IT: Although Nicco Montano withdrew from her fight the day of the weigh-ins, every fighter that hit the scales before UFC 228 made weight, making this event the sixth straight have every fighter officially make weight. This streak, starting at UFC Fight Night 133 this past July, is the longest of its kind since an eight event stretch from UFC Fight Night 76 to UFC 194 in 2015.

SHE’S ALL THAT: UFC 228 was the second event in UFC history to feature multiple women’s bouts ending by knockout, joining UFC 185 in 2015 when Joanna Jedrzejczyk and Germaine de Randamie both scored knockouts.

WELL-DESERVED: With bouts involving female fighters earning both “Fight of the Night” and “Performance of the Night” bonuses, UFC 228 became the third event in UFC history to award bonuses to multiple female fights, following the TUF 23 Finale and UFC on Fox 22 both in 2016.

CALL IT WHAT YOU WILL: Submitting Darren Till by brabo choke in the second round, Tyron Woodley became the first fighter in a UFC championship bout to ever win with that type of choke.

EVERYBODY’S GOT TO LOSE SOMETIME: Coming into his bout with Woodley, Till was undefeated in 18 fights with 17 wins and a draw on his record.

NICCO WAS NEVER MY FRIEND: Hospitalized the day before her fight due to complications from her weight cut, Montano was forced to withdraw from her first title defense against Valentina Shevchenko. Winning the belt in December 2017, Montano had multiple surgeries during 2018, and after the hospitalization she was stripped of her title. Montano became the fourth champion in 2018 to have their belt taken back by the UFC.

ANYTHING YOU CAN BE, I CAN BE GREATER: Since July 2013, Jessica Andrade has competed 14 times inside the Octagon, the most of any female fighter in UFC history. With her tenth UFC victory, she is now the winning woman in company history.

ONE PUNCH WOMAN: Knocking out Kowalkiewicz in one punch, Andrade scored the sixth KO in women’s divisional history and only the second from a single punch. Ronda Rousey’s one-punch knockout of Bethe Correia at UFC 190 in 2015 was the first.

IT PAYS TO DROP DOWN: Earning a “Performance of the Night” bonus for her first-round knockout of Kowalkiewicz, Andrade has now earned four post-fight bonuses in her last six bouts. All four bonuses have come following Andrade’s move down to strawweight, having never earned a post-fight bonus while competing at bantamweight.

I WANNA TAKE YOU TO A KNEEBAR: Kenny Robertson submitted Brock Jardine at UFC 157 in 2013 with a modified kneebar called a “Suloev Stretch,” named after former UFC fighter Amar Suloev. It was the only of its kind in UFC history until UFC 228, where the submission was performed not once but twice. First, Aljamain Sterling locked the maneuver up against Cody Stamann, and then incredibly Zabit Magomedsharipov used the same move to tap Brandon Davis four fights later.

DEAD MONEY: Magomedsharipov closed as the -1375 betting favorite against short notice replacement and +900 underdog Brandon Davis, and in doing so he became the biggest UFC betting favorite UFC 193 in 2015, when -1400 favorite and then-champ Jedrzejczyk fought +925 Valerie Letourneau.

ONE SPEED: Demolishing Price in 43 seconds, Abdul Razak Alhassan has recorded all ten of his career wins by first round knockout, with six of those knockouts occurring in less than a minute. Alhassan’s lone loss came by split decision.

WOMAN ON A MISSION: Earning the stoppage with strikes at 4:33 of the third round over Carla Esparza, Tatiana Suarez picked up the fifth latest stoppage win in UFC women’s divisional history, and advanced her record to 7-0 with five stoppages.

GO DIEGO GO: Taking a dominant decision win over Craig White, each of Diego Sanchez’s last eight wins since 2009 have come by decision.

CHAMPAGNE OF FIGHTERS: Despite entering on a four-fight winless streak, Jim Miller made his record 30th appearance inside the Octagon at UFC 228 with a victory over Alex White. Making his debut at UFC 89 in 2008, it took him just under ten years to accomplish this feat.

UNDER THE CHIN, YOU GET THE WIN: Submitting Alex White in the first round with a rear-naked choke, Miller picked up his 17th career win at lightweight, the most in divisional history.

CONSUMMATE PROFESSIONAL: In addition to his 17 lightweight wins, Miller’s 18th UFC win took place at UFC 205 at a catchweight when his opponent Thiago Alves missed weight. With that 18th win inside the Octagon, Miller tied Matt Hughes for the fifth most wins in company history, trailing Georges St. Pierre, Donald Cerrone, Michael Bisping and Demian Maia.

IT MOVES US ALL: Making his walk to the cage accompanied by “Circle of Life” by legendary musician Elton John, Alhassan became the first recorded fighter in UFC history to walk out to an Elton John song. Alhassan prevailed by first round knockout.

I KIND OF THINK YOU MEAN THE OTHER THING: Walking out for the second time to “Victory” by Puff Daddy featuring Notorious B.I.G. and Busta Rhymes, Price suffered a loss while using the track. With the loss, fighters to walk out to “Victory” have won only 33 percent of their fights after 18 recorded uses.

YOU CAN’T WIN, ROCK!: Opting to go with one of the most frequently used songs, “Eye of the Tiger” by Survivor, Frank Camacho lost to Geoff Neal. By losing, he gave “Eye of the Tiger” its 18th recorded defeat, good for the second-most losses of any walkout song in UFC history.

THE VOICE OF RAGE AND RUIN: Returning to a song that served him well throughout his career, Miller walked out to “Bad Moon Rising” by Creedence Clearwater Revival for the 17th recorded time and submitted Alex White. When bolstered by “Bad Moon Rising,” Miller celebrates an impressive record of 12-4 with a no-contest.