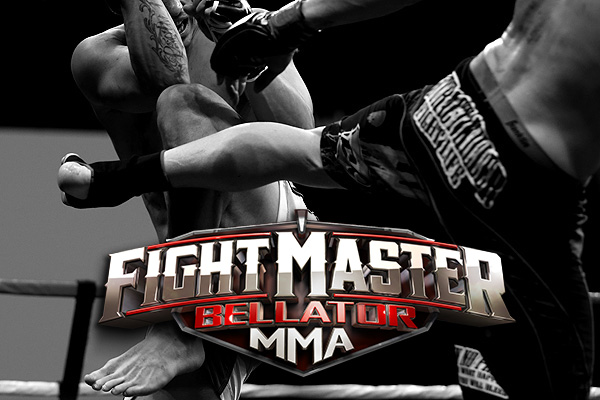 The premiere of “Fight Master: Bellator MMA” opens with 32 men glaring at the camera lens while standing shirtless in an empty, cavernous gym located somewhere in New Orleans.

Yes, of course, I see how this will be different from “The Ultimate Fighter” already. “TUF” takes place in Las Vegas.

The coaches are then introduced: Greg Jackson, Frank Shamrock, Joe Warren and Randy Couture. The format of the show will require the 32 welterweight hopefuls to square off in a qualifying round to narrow the field to 16. After each fight, the winner has the opportunity to choose one of the four coaches, who will mentor him throughout his time on the show.

Up first is a duel between Bellator newcomer Chip Moraza-Pollard and Tim Welch, who was submitted by Michail Tsarev in the quarterfinals of Bellator’s Season 7 tournament last year. Introducing the fighters is Bellator color commentator and “Fight Master” host Jimmy Smith, who apparently stole and altered one of broadcast partner Sean Wheelock’s blazers for tonight’s taping.

All four coaches are mic’d up to comment on the action from four leather La-Z-Boys, awkwardly rapping back and forth during the fight. I think this could easily turn into an inadvertent “Mystery Science Theater 3000”-type situation.

Moraza-Pollard looks sharp in the early going, rifling off a crisp jab, but Welch bides his time and finally strikes, countering that jab with a lunging two-three combination that puts his opponent down and brings Warren to his feet. All four coaches seem stoked on Welch’s potential and covet his presence on their teams.

Before making his selection, Welch asks his prospective mentors some questions. After both Jackson and Couture assure him that they are in this thing for the long haul, Shamrock goes a different route by complimenting Welch on his Irish and Native American heritage. The former King of Pancrase goes on to say that Welch comes from “championship stock” and that he knows “what kind of fire red-headed people have.”

Welch explains that he was called “carrot top” and “tomato” growing up and got into fighting as a way to fend off bullies. He then chooses Jackson to be his coach, much to the New Mexican’s delight.

Up next, onetime Bellator vet Eric Scallan will face Christopher Curtis. While Scallan says that MMA got him sober and saved his live, Curtis describes himself as a nerd who chooses to fight because he enjoys the competition.

Curtis tries to touch gloves, but Scallan instead rifles off a body kick. Curtis responds by dropping Scallan with a stiff jab, but the Bellator alum pops right back to his feet. Curtis again puts his opponent on the mat with a knee to the jaw but cannot find the finish, instead giving up a takedown. The rest of the fight is shown through montage, with Scallan continually putting Curtis on his back to earn a majority decision.

An emotional Scallan is overjoyed that he has made it onto the show. Meanwhile, each of the coaches seems to be hoping he picks someone else. In the end, Scallan chooses Warren, who thanks Scallan for his choice and then, after Scallan walks away, says, “Damn.” Shamrock openly celebrates the lack of Scallan on his team in a confessional.

Next on the docket are Brendan Tierney and Nick Barnes. Though Barnes is both undefeated and 15 years younger than his opponent, I simply cannot bet against Tierney’s magnificent Errol Flynn mustache and ballet experience.

Barnes charges forward with power hooks and scores a double-leg takedown, but Tierney escapes to his feet. Tierney eats several hard punches but responds by grabbing a Thai plum and flooring his 22-year-old opponent with a knee to the jaw. “Tiny Shorts” takes Barnes’ back but is riding high, unable to cinch either an inverted triangle or an armbar. Barnes pops his head out and takes top position and then the back, finishing the fight with a rear-naked choke. Though all four fighters covet the unbeaten prospect, Barnes selects Shamrock to be his coach for the next six weeks of taping.

Strikeforce and Bellator veterans Darryl Cobb and A.J. Matthews do battle next. Cobb comes out aggressive, using a quick and varied striking attack to win the first round. Mathews comes back strong in round two, however, battering his foe with kicks and planting him on the floor with takedowns. The fight is ruled a draw after two rounds, and the sudden victory frame easily belongs to Matthews, who takes Cobb down and pounds on him until the final bell. Following his victory, the Californian selects Couture as his coach.

Rounding out the first episode is three-time tournament veteran Chris Lozano, who faces seven-fight pro Josh Quayhagen. Lozano has his way with “Quay” in round one, but Quayhagen responds with some early offense to start the second frame before giving up another takedown. Lozano quickly traps Quayhagen’s left arm behind his back in seat-belt control, leaving the Louisianan just one appendage with which to defend ground-and-pound from half-guard. The results are ugly: Lozano repeatedly batters Quayhagen with right hands to the face, leaving Quayhagen bloody, bruised and defeated. Despite previously training under Jackson, “The Cleveland Assassin” decides to become a part of Team Shamrock.

Only 27 shirtless men remain in the competition. Next week, the qualifying round rolls onward with more fights and more coach selections. Who will become the first “Fight Master,” and, more importantly, will he later hope that no one ever actually calls him that?