Bruises are as much a part of mixed martial arts as tattoos and cauliflower ears, but the bruise endured by Mark Hominick in Saturday’s UFC 129 featherweight title bout with Jose Aldo was of another degree entirely.

Any trauma to the tissues of the body can result in a hematoma. If only the low-pressure capillaries in the skin are disrupted, the hematoma that develops is usually no more than a simple bruise. A larger and potentially more serious hematoma develops if veins are damaged. Hominick’s injury appeared to be an even more significant form of hematoma: one caused by arterial bleeding.

The superficial temporal artery originates at the external carotid artery; it rises upwards anteriorly to the ear and extends branches posteriorly to the parietal region of the scalp, and anteriorly across the forehead. Aldo’s punch to Hominick’s head appeared to tear this frontal branch of the superficial temporal artery. An artery cut cleanly -- whether with a scalpel or shard of glass -- spasms downward, spontaneously achieving hemostasis. But torn arteries tend to bleed extensively into the surrounding tissues. Bleeding only stops when the pressure in the damaged tissues matches the pressure in the ruptured vessel: for an athlete, that is on the order of 150 mmHg.

There is very little tissue overlying the bone of the skull -- connective tissue, subcutaneous fat, the frontalis muscle -- and the underlying bone is unyielding. As a result, hematomas of the scalp, or cephalohematomas, tend to bulge outwards creating a “goose egg” appearance not seen elsewhere on the body. 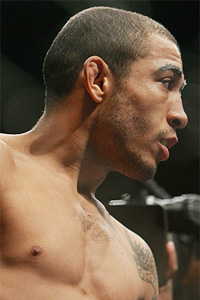 Jose Aldo file photo
Aldo busted Hominick up.
Cephalohematomas are painful and disfiguring, but only dangerous to the extent that they signal the potential presence of more serious associated injuries. When the cageside physician stepped in to examine Hominick, he did a quick pupillary exam. Ensuring the pupil constricts in response to bright light confirms that the retina is capable of perceiving light and that the nerves innervating the eye are intact. Next, he palpated the edges of the hematoma, feeling for the irregular contours of a depressed skull fracture. It would be unusual for a punch to cause a fracture of the thick frontal bone, but such an injury cannot be missed: it puts the fighter at risk for serious brain injury the next time he’s hit. The presence of either a badly damaged eye or a defect in the skull would have required an immediate fight stoppage.

As it was, the fight continued. At the round break, the doctor stepped in to examine Hominick further. He tested the fighter’s peripheral vision and extra-ocular motor function; both were intact, meaning Hominick could see well enough to target his punches and avoid his opponent’s.

Simultaneously, the Canadian’s cutman worked the enswell, trying to push the hematoma laterally away from the supraorbital ridge that lies deep to the eyebrow. The enswell did little good: if Aldo had landed a solid shot on the taut hematoma, it would have likely ruptured in a blinding fountain of blood.

Judging from the comments among those with whom I watched the fight, few would have questioned the attending physician had he stopped the fight. But he would have been wrong to do so. He would have stolen something precious from Hominick: the chance to finish the fight, to win new fans, to earn an extra $129,000 bonus for his growing family, and to be part of something truly great. Kudos for his forbearance.

To many of us who watched UFC 129, a far more worrisome injury was welterweight champion George St. Pierre’s wounded left eye.

It was unlikely that challenger Jake Shields’ finger to the eye had caused a catastrophic injury, such as a globe rupture or complete retinal detachment, but St. Pierre was clearly distressed. Any number of reversible injuries -- a broad corneal abrasion, bleeding in the anterior chamber of the eye, a lens disruption -- would render the affected eye temporarily useless. Trainer and corner Greg Jackson’s exhortations to ignore the injury and fight through it did not appear to comfort St. Pierre.

Had the ringside physician heard St. Pierres’s anxious report to Jackson (“I can’t see,” GSP said. “I can’t see at all,”) the doctor would have been duty bound to stop the fight. A fighter with only one eye cannot see stereoscopically, cannot see in three dimensions. In a striking match, that is a crippling disability. Further, if a fighter has an injured eye, the ringside physician must assume the worst: that the damage is irreparable and the fighter has only one good eye left to live with. It would be unconscionable to leave an impaired fighter in the ring knowing that a blow to his now-lone good eye could leave him totally blind. In such a case, it is the ringside physician’s responsibility to step in and protect the fighter not merely from his opponent, but from his own drive to fight on in the face of a potentially life-altering injury.