An elite third man: Herb Dean is both a competent, and consistent referee. | Photo: Jeff Sherwood


There may be a no more certain trigger for fan outrage than an early stoppage. It includes the classic elements of high drama: injustice, theft and insoluble controversy. Referee Herb Dean’s decision in the Strikeforce/M-1 Global “Fedor vs. Henderson” main event is that rarest of early-stoppage species: the virtually indisputable correct call. Dan Henderson landed his vaunted right hand, Fedor Emelianenko’s lights flickered out as he went down, and Dean moved in to save a venerated veteran from unneeded damage heaped upon growing ignominy.

However, just as easy cases make bad law, indisputable calls fail to illuminate the difficulty of the referee’s duties within the ring. Perhaps a better exemplar is referee Dan Miragliotta who, within the span of only a handful of UFCs, is responsible for one of the most criticized early stoppages and one of the most celebrated non-stoppages in the history of MMA.

Referees are charged with determining when a fighter has lost the capacity for intelligent defense, perhaps the most important of the core principles which separate combat sport from mere violence. But what precise degree of impairment constitutes loss of the ability to intelligently defend one’s self? Does a 10 percent diminution necessitate stopping a fight ... 30 percent ... 80 percent? And what is to be made of cases where a fighter can evade blows but cannot strike back? And how does one evaluate these parameters dynamically as a fighter’s head clears, or he takes another punch? Making such decisions is the referee’s unenviable duty, and he has to do it in the time it takes an athletic young man to recognize his opponent is hurt and throw a finishing punch: 200 milliseconds.

The best research on the science of split-second irreversible decision making comes from law enforcement. Compared to police work, the stakes are far lower in MMA. However, the requirement of making instantaneous irreversible decisions with limited information is analogous, as is the risk for harm. MMA fans should not pretend that failure to stop a fight is without risk: an undefended blow can kill or cripple a fighter.

The first identified step in the science of critical-action intervention -- police or MMA -- is simply seeing the event. This should be simple; we place metaphysical faith in the fidelity of our perceptions. If we see it, we know it to be true. Yet, the evidence shows nothing could be further from the truth.

A study on law enforcement lethal force decision making showed officers split-second images of suspects, followed by objects: pistols, wrenches, knives and cell phones. Police officers of all races were more likely to identify the barely glimpsed object as a weapon if the image that preceded it was that of a black suspect. Even in a safe, well-lit lab far from the dangers of the street, the image of a “high-risk suspect” led directly to the officer seeing a weapon in the next image flashed before his eyes.

In MMA, a referee who knows a certain fighter is a knockout specialist is more likely to see -- truly see -- a knockout in what might actually be a survivable knockdown. We ask referees to call them as they see them. We can ask no more.

Once an event is witnessed -- a knockdown or a suddenly brandished object -- the decision on whether and how to act must be made. MMA officials have a simple choice: leap in or hold back. According to Hick’s law of selection, these are the fastest choices to make, but simple binary choices are susceptible to preference bias -- the reflexive selection of the “safest” or preferred choice. What is the safe decision for an MMA official? Letting a fight go too long has clear negative consequences for the official: a man’s death is a horrible burden to bear. More pragmatically, he may lose his job, as deaths in the ring are dire trouble for promoters and athletic commissions alike.

Conversely, early stoppages pose very little risk to the official. Fans may rail against him and promoters may bellow, but, in three months, there may be a rematch with built-in marketing and six-digit pay-per-view numbers. 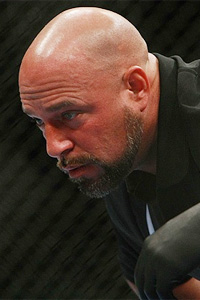 Dan Miragliotta File Photo
Miragliotta has faced criticism.
Lastly, law enforcement studies show conclusively that decision speed and accuracy are inversely related; it is impossible to maximize both. When speed is required -- as in MMA -- accuracy must be sacrificed. It is an inconvenient truth.

Miragliotta’s non-stoppage of the Cheick Kongo-Pat Barry fight at UFC Live 4 in June was exemplary; he allowed Kongo to fight though Barry’s assault, protecting both fans and fighter from the theft of an electrifying come-from-behind win.

On the other side, Miragliotta’s officiating of the Amir Sadollah-Johny Hendricks bout at UFC 101 provides a good illustration of the anatomy of an early stoppage.

Leading into the stoppage, Sadollah and Hendricks are pseudo-clinched: “The Ultimate Fighter” Season 7” winner is working on a Thai clinch, and Hendricks is dirty boxing with his right hand behind Sadollah’s neck.


At the start of the 26th second, Sadollah stumbles. Hendricks shifts back, using the right hand behind Sadollah’s neck to pull him downward. Sadollah falls forward, and Hendricks steps to the right; this changes the three men’s geometry from an isosceles triangle, with Miragliotta at the apex, the ideal referee position, to a line, with Hendricks’ crouched body obscuring Miragliotta’s view. Hendricks fires a left. From the camera’s perspective, we can see it miss. Miragliotta begins to move to re-establish position. Hendricks throws a right, and Sadollah shrinks into the fence.

What we do see is that, suddenly, the trajectory of Miragliotta’s body changes: he stutter steps, plants his right foot and transitions from a line leading him back into position to lunge at Hendricks. Miragliotta has fired through the intervention pathway and decided to take an irreversible action. He puts his left hand on Hendricks’ shoulder and his right under the fighter’s right arm, which is reaching back to fire again. The fight is over, and, then, the 28th second starts.

Miragliotta has done everything that could be asked of him. He has witnessed, analyzed and acted in a fraction of a second, and he has erred. It was a blown call, an early stoppage. But it was almost certainly inevitable, if not at this instant in this fight, then at some point in his career. It is not evidence of bad refereeing but evidence that even good refereeing is bound by the vast but finite constraints of the human mind.

Matt Pitt is a physician with degrees in biophysics and medicine. He is board-certified in emergency medicine and has post-graduate training in head injuries and multi-system trauma. To ask a question that could be answered in a future article, e-mail him at [email protected]