Chris Leben sat in a Clackamas County jail in northwestern Oregon for three weeks and pondered his past, present and future. Arrested on a probation violation related to a previous DUI conviction, Leben forfeited his chance to fight Michael Bisping at UFC 85 in June. As bad career moves go, few could have been worse.

“Obviously, things came up,” Leben says. “It was a huge letdown.”

Fortunately for the 28-year-old middleweight, UFC officials were in a forgiving mood. Given a reprieve by matchmakers, Leben (18-4) will challenge the once-beaten Bisping in the featured bout at UFC 89 this Saturday at the National Indoor Arena in Birmingham, England.

“This is a huge opportunity for me,” Leben says. “Luckily, the UFC came back around and offered the fight again. It lit a fire underneath me. When I got a second chance, it made me that much more focused. I love the matchup. It’s the fight I wanted.”

His stint in a Pacific Northwest slammer aside, Leben has undergone a dramatic transformation since he appeared on season one of “The Ultimate Fighter” reality series. Gone seem the wild child days in which he found pleasure in breaking down doors and baptizing beds with urine. They were replaced by an eloquence and maturity spawned by genuine personal growth.

Leben’s metamorphosis was triggered by his embarrassing 49-second knockout loss to reigning UFC middleweight champion Anderson Silva in 2006. Brash antics were traded for respectful undertones. In recent days, new pictures of Leben have emerged, revealing how renewed dedication to training has altered his physical appearance. Ripped lean muscle has chipped away at his once pudgy exterior. 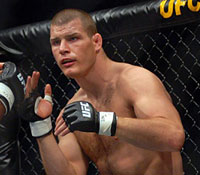 Photo by Sherdog.com
"This is a huge opportunity
for me," said Leben of a
shot at Michael Bisping.
“He’s in really good shape,” says T. Jay Thompson, whom Leben works under as the MMA instructor at the Icon Fitness gym in Hawaii. “It will be interesting to see what people say after all the interviews and the weigh-ins. He looks a lot different.”

A headliner on a significant UFC card for the first time in his career, Leben went to great lengths to prepare for Bisping and even brought former Sportfight champion and longtime Team Quest associate Chris Wilson to Hawaii. An accurate striker with quick hands, Wilson mimicked the British middleweight as a key part of Leben’s training camp.

“He’s got some height, and he’s a little better at striking than Michael,” says Leben, who also spent time honing his skills under MMA trainer extraordinaire Matt Hume in Seattle. “Training’s gone phenomenal. I started the camp a little early.”

Leben needs every edge. Bisping (16-1) has looked nearly unstoppable since he made the move to middleweight earlier this year. He annihilated American Top Team’s Charles McCarthy at UFC 83 in April and then carved through Canadian veteran Jason Day seven weeks later at UFC 85. A split-decision loss to top light heavyweight contender Rashad Evans remains the lone blemish on Bisping’s resume.

Still, Leben believes the Brit may fold under consistent pressure.

“It’s easy for him to look good if you don’t press the fight against him,” he says. “I’m going to go out and press him the entire time. I know I’m in the best shape I’ve ever been in. Hopefully, that will play a factor in the fight.”

Leben expects a rude welcome from what promises to be a pro-Bisping crowd in Birmingham, though he shrugs off the idea that he will enter the cage as an underdog. Since back-to-back losses to Jason MacDonald and Kalib Starnes, Leben has rattled off consecutive victories against Terry Martin and Alessio Sakara, finishing both in spectacular fashion. He has momentum in his corner, too.

“I know that he’s going to have a few more fans in the building,” Leben says. “On paper, I don’t see myself as the underdog. You look at Bisping’s record and you look at my record; it’s a solid fight.”

Leben relishes the idea of being cast as the villain again.

“It doesn’t matter if they love you or hate you, as long as they care one way or another,” he says. “I like being the bad guy.”

Only one man -- the incomparable Silva -- has stopped Leben on strikes. Such durability could serve the American well against Bisping, who relies heavily on his hands and feet to win fights. In fact, 12 of his 16 victories have come by knockout, technical knockout or strike-induced submission.

“The guy can take a good punch,” Bisping says. “We’ve all seen it. Chris is tough. He’s not easy to put away.”

Much will be at stake when Leben and Bisping finally face one another. In a top-heavy division still thin on legitimate championship contenders, a convincing win could vault either of them into immediate title contention.

“I’ve said it before, and I’ll say it again,” Leben says. “This fight’s going to be a deciding factor in who moves into the top tier in the middleweight division and who’s going to be in line for a title shot.”

Leben wants nothing more than another shot at Silva, the Brazilian who buried him under a violent volley of punches, kicks and knees two years ago in Las Vegas. He claims to have learned from his mistakes.

“I’m a much different fighter now,” Leben says. “The Chris Leben of today wouldn’t do what I did then.”