An “Ultimate Fighter” graduate, Josh Hill has started his career with 10 straight wins.


The opportunity to win the World Series of Fighting bantamweight championship has been a long time coming for Josh Hill.

Hill will challenge Marlon Moraes for the 135-pound title in the WSOF 18 main event on Thursday at the Edmonton Expo Centre in Edmonton, Alberta. He was originally supposed to fight for the championship in September, but an injury forced him to withdraw just 10 days out from the event. After two subsequent delays, the two bantamweights will finally meet in the Great White North.

“This camp has gone really, really well,” Hill told Sherdog.com, a perfect 10-0 record in tow. “I’ve been training for this fight since about September. After the fight in September fell through, then I thought I’d be fighting in December [and] then January. Now, it’s February. I’ve been having to slow down my training and then pick it back up when another date would be set.”

Hill split his training between Team Alpha Male and the House of Champions gym in Ontario.


While some injuries allow fighters to carry on with schedule bouts, the 28-year-old Hill was left with no choice but to withdraw last summer.

“I tore a muscle in my back,” said Hill, who sports four finishes among his 10 career victories. “I was two weeks out from the fight and in my second-to-last sparring session. I was just training with [UFC bantamweight] Mitch Gagnon. I faked a shot and went to throw a combination, and I shot again. I felt my lower back seize up. For like four days, I couldn’t get out of bed. It wasn’t an injury where I needed a long rehab, but I couldn’t really do anything from the time it happened to the time of the fight, so I definitely couldn’t have fought. It was just a timing thing. It was very frustrating.” 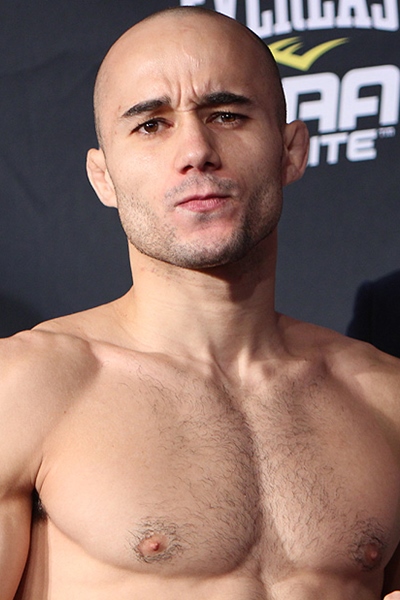 (+ Enlarge) | Photo: Dave Mandel/Sherdog.com
Moraes is on a tear.
Hill made his professional mixed martial arts debut in October 2009, delivering a second-round knockout win over Vito Attanasi at a Warrior-1 MMA event in his native Canada. He earned nine wins on the regional circuit before he was selected for the cast of Season 18 of “The Ultimate Fighter.” After defeating Patrick Holohan via majority decision to earn a spot in the “Ultimate Fighter” house, he was chosen by coach Miesha Tate. Hill lost a unanimous decision to Michael Wootten in the quarterfinals but admits the time spent on the reality series benefitted his career.

“It was very surreal, but the experience was very cool,” he said. “The first couple of days, you see all the cameras around and it can be tough to deal with, but eventually it got to where it didn’t bother me. I watched the show when I was younger, and I remember even before I started training to compete in mixed martial arts that I thought it would be cool to be on there. It’s a tough process to make it on the show. You have to go and try out, and there were more than 300 guys trying out in my season. You’re going through screenings, interviews and medicals. Getting the call to fight was exciting. Things didn’t play out like I wanted, but it was really cool and I’m happy that I did it.”

After his stint on “The Ultimate Fighter,” Hill signed with the World Series of Fighting and made his organizational debut in June, knocking out Mike Adams in the first round of their WSOF Canada 2 clash. Afterward, he began asking for a fight with Moraes, and WSOF officials obliged.

“I’m pumped,” Hill said. “I asked for this fight and I got it. I signed with WSOF after ‘TUF.’ I was supposed to fight [in] March, April and [then] May and finally got to fight in June. I got a nice win and I heard them talk about a title fight, and I told them I would [fight Moraes]. It’s a fight I’m looking forward to because Moraes is a good fighter. He’s a top-10 fighter in the world in this weight class. I think a win would skyrocket me and give me a lot of notoriety. I made a bucket list of MMA items about two years ago and winning a world title is up there.”

Moraes is 6-0 under the World Series of Fighting banner, most recently taking out Cody Bollinger via rear-naked choke in the second round of their non-title encounter at WSOF 13. He has won eight straight fights overall and currently sits at No. 8 in the Sherdog.com bantamweight rankings.

“Marlon is well-rounded, but his best weapons are on his feet,” Hill said. “He has some very powerful kicks and muay Thai. That matches up well with my wrestling, speed and strengths. It’s a styles clash that could make for an interesting fight.”

“
I made a bucket list of
MMA items about two
years ago and winning
a world title is up there.

Hill -- who took his nickname from his great uncle, professional wrestling legend “Gentleman” Jerry Valiant -- does not plan to give Moraes the openings he needs to land the strikes necessary to win the fight.

“I’m not going to give away my game plan, but I know a lot of his opponents stand in front of him,” Hill said. “I’m not just going to stand there. I’m going to be moving and creating angles and make it hard on him. That should lead to openings for me. I’m not going to be a sitting target for him to tee off on.”