After the pair traded top position throughout the first round, Grant tossed Baker with a sweeping wrap-around throw, and unleashed potent punches and elbows from half guard. As Grant bashed Baker, the roar of the Dartmouth crowd grew so deafening that when the first round expired, the air horn blast went unheard, leading many spectators to believe that Grant had won.

Instead, Grant's victory would be much more arduous, as Baker, who replaced TUF 6 alum Richie Hightower on a week's notice, proved to have a strong chin. Grant continued to thwart the former Virginia state wrestling champion's takedowns, consistently scrambling and sweeping back to his feet, where he blasted Baker flush with crosses and knees. Despite absorbing repeated unabated blows, an exhausted Baker, just two weeks removed from his victory over UFC vet Tom Speer, was still game enough to escape as Grant secured side control, stepped over his head, and looked for a kimura.

Grant continued attacking to open the third round, showing off teeps and leg kicks against the bloodied and battered Baker. It seemed as if by miracle that Baker remained upright as Grant put two enormous punch combinations right on his chin, bobbling his head like a speed bag. Baker had the wherewithal to manage a single-leg takedown, but Grant methodically regained full guard, trapped Baker's arm, and struck swiftly and deftly as Baker tiredly rose for a hammerfist, locking in a textbook armbar to cap off his puissant performance. The tapout came at 3:03 of the third round, inciting chants of "UFC, UFC, UFC."

"He was real tough. There were times I hit him so many times, it was kind of exhausting," said the 24-year-old Cole Harbour native following his victory. 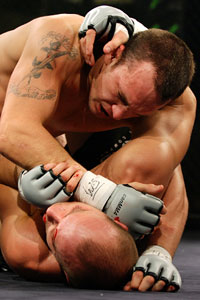 Having surprisingly lost three of his last four fights to relatively anonymous southwest competition such as Richard Villes and Jose Cortez, Fickett quickly took the New Glasgow native to the ground and slickly passed to mount where he rained down heavy elbows in the 160-pound bout.

While MacKay was able to use the TK Scissors to escape and put Fickett on his back momentarily, Fickett stepped over MacKay's body into mount from a front headlock position, and resumed his elbow onslaught. When a bloodied MacKay bucked and rolled, Fickett smoothly transitioned into a triangle choke, eliciting the tapout at 3:25 of the first frame.

"Chance favors the prepared athlete. I get away with being pretty technically good, but there comes a time you need to dedicate yourself," waxed Fickett on his recent losses. "I shouldn't have let it come to that. I should be walking through guys like that."

"Let me tell you something: I'm never going to stop drinking beer," Fickett continued, brew in hand. "But recently, I just had a new baby girl, and that changed my perspective on a lot of things. Dennis Hallman told me it takes a man to make a man, and I had my baby girl."

Ryan "Big Deal" Jimmo, a member of “The Ultimate Fighter” season eight's original cast of 32, made a statement for Zuffa recall, as he handily put away 41-year-old former kickboxing star turned MMA hopeful Rick "The Jet" Roufus, who replaced UFC vet Carmelo Marrero, in the opening round of their 210-pound contest.

Jimmo scored a tidy outside trip from the clinch, and after landing in Roufus' half guard, worked his way to Roufus' back, where he began opening up with punches. Roufus, who took the bout on two days notice, covered his head as Jimmo wailed away until referee Brad Jardine halted the bout at 2:24 of the first round. The bout was offered minor controversy for Jardine, as several of Jimmo's punches landed square on the back of K-1 veteran's skull, though Roufus' protests were met only with a shrug from Jardine.

Having won his last nine fights since losing his pro debut to Canadian Football Leaguer Adam Braidwood, Jimmo told Sherdog.com that he plans to fight for Quebec's Xtreme MMA again in January, where a win could set up a matchup with Martin Desilets in March.

Digby, Nova Scotia native Tristan Johnson's was wheeled to cageside to Snoop Dogg's "Murder Was the Case," strapped to a dolly in full orange jumpsuit and restraint mask, and while his performance was not quite of Hannibal Lecter's homicidal variety, he put a beating on Quebec's Eric Leclerc.

Leclerc had moderate success through the first round, landing with leg kicks as Johnson primarily pawed from the outside. However, the last ten minutes were an exhibition of Leclerc's chin and body, as the lanky Johnson liberally smashed him with punches and knees to the face and guts.

A poke to the eye in the second stanza left Johnson with badly broken blood vessels and chronic double vision, but he managed to catch Leclerc continuously with crosses. Despite the punishment, Leclerc made it the full 15 minutes on his feet, but dropped a unanimous decision to Johnson, 29-28 on all three scorecards.

Martin Grandmont missed weight on Friday, forcing his bout with Jeremy Henry to be fought at a 160-pound catch weight, but the former TKO lightweight title challenger was much more exacting in the cage than on the scales.

Henry opened strong with an inside trip to full mount, but Grandmont was able to buck and roll, landing in Henry's guard just inches from his own corner. From there, "The Hammer" did just as his corner asked, throwing body-body-head combinations, until the accumulated blows forced referee Cyril Desjardins to save Henry at 3:26 of the first round.

The evening's curtain jerker ended in unfortunate circumstance, as Justin Bourgeois connected with a dubious knee to the midsection of Daryle Pinter that crumpled him to the mat, allowing Bourgeois to flurry with punches and prompt referee Brad Jardine to intervene at 4:31 of the first round.

Following the stoppage, Pinter was in visible pain as he held his groin and protested to an indifferent Jardine, but to no avail as Bourgeois' TKO victory stood.

A scheduled bout between Josh Strickland and Shane Daley was cancelled during the event, as Daley tore his MCL while warming up in his dressing room.

Andy Cotterill contributed to this report