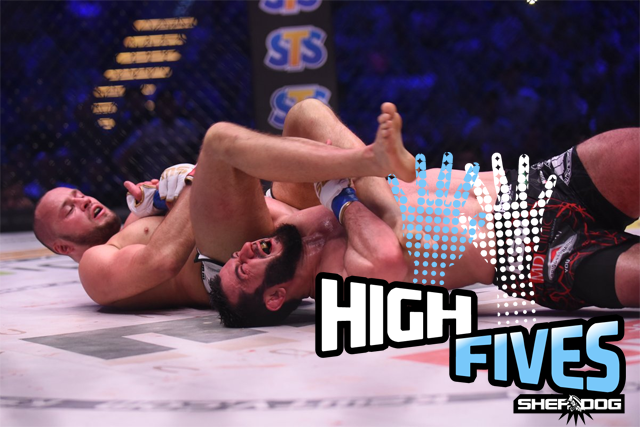 “The Ultimate Fighter 28” Finale, UFC Fight Night 142, Bellator 210 and Bellator 211 may have hogged most of the headlines this past weekend, but there were plenty of pivotal clashes taking place elsewhere.

Saturday’s Konfrontacja Sztuk Walki (KSW) 46 at the Arena Gliwice, in Gliwice, Silesian, Poland hosted some memorable bouts. And there were a pair of highlight reel knockouts at Friday’s Legacy Fighting Alliance 55, at The Bomb Factory, in Dallas, Texas.

RIVETTING REMATCH … The KSW 46 main event was a light heavyweight rematch between promotional stalwarts Tomasz Narkun and Mamed Khalidov. In their first meeting at KSW 42 back in March, Narkun had emerged victorious. This time out, adopted Pole Khalidov came out aggressively. Early in the round, he dropped his adversary with a left hook to the head. In the second, Khalidov landed some effective ground-and-pound from top position in guard. Late in the frame, the roles were swapped when Narkun reversed position and laid into Khalidov with punches from on top in guard. The third was a back and forth affair, contested for the most part on the mat. Narkun threatened via a tight armbar, but Khalidov escaped. After three competitive rounds, it was Narkun who took the unanimous decision. With the win, “Giraffe” moved to 16-2. Following the fight, former KSW light heavyweight and middleweight champion Khalidov, now 34-6-2, announced his retirement.

WALK OFF KO … The KSW 46 card featured an eagerly-awaited welterweight match-up that pitted Bosnian Roberto Soldic against Brazilian Vinicius Bohreh. Late in the opening frame, Soldic threw a left hook to the head that landed flush and sent Bohreh crashing to the canvas. Soldic promptly turned and walked off. With the emphatic 4:35 KO triumph, Soldic improved to 15-3. A remarkable 13 (87 percent) of those wins have come by KO/TKO. In defeat, Bohreh slipped to 16-7.

THREE’S A TREAT … KSW 46 kicked off with a welterweight scrap between Krystian Kaszubowski and Michal Michalski. A little over two minutes into the bout, Michalski stepped forward and threw a left jab to the head, which was countered by a Kaszubowski right hook which landed on his rival’s temple. Michalski plummeted to the mat, where a further Kaszubowski punch ensued before the referee jumped in and waved the fight off, at the 2:14 mark of the first period. This was the third time in succession that “Kris” has finished his opponent in the opening stanza. In victory, he upped his record to 7-0; while with the loss Michalski dipped to 6-4.

It's lights out just 13 Seconds into #LFA55! Austin Lingo shuts it down early and remains undefeated in our first fight of the night!@lfafighting pic.twitter.com/QnwxhVpbPy

HANDS OF STONE … The first fight of the night’s main card at LFA 55 was a featherweight showdown that paired Austin Lingo against Aaron Webb. Both combatants came out looking to throw punches. A mere 13 seconds after the bell had sounded, Lingo connected with a left hook to the head that resulted in his rival being splayed out unconscious on the mat. With the explosive KO win, Lingo, now 5-0, kept his unblemished resume intact. Meanwhile in defeat, Webb fell to 2-2.

SPECTACULAR HIGH KICK … The LFA 55 preliminaries commenced with a flyweight clash between Jessica Sotack and Hailey Cowan. The end came 26 seconds into the second stanza, when Cowan threw a high left roundhouse kick which hit Sotack on the side of the face, dropped her to her back and rendered her unable to continue. The spectacular head kick finish saw former gymnast “All Hail” move to 2-1. Adversary ‘The Rebel’ fell to 1-2-1.