In the featherweight tournament final, Yuji Hoshino pitched a shutout against Shooto wild child “Wicky” Akiyo Nishiura to take the featherweight tournament and become the promotion’s divisional champ. Nishiura showed little inclination to change up the game that had won him the 2006 rookie championship in Shooto’s 143-pound division, fidgeting and feinting before committing to one all-or-nothing flying kick or lunging punch. Hoshino evaded most of Wicky’s attacks, quickly retaliating with jabs of his own or the inevitable takedown.

Having originally competed at welterweight in Pancrase, Hoshino seemed to have a definitive weight and strength advantage, nearly nullifying Nishiura’s preternatural ability to squirm out from underneath to bring the fight back to his territory. Outside of escaping from the bottom in the second round, Wicky was firmly pinned down and mounted almost at will by Hoshino in the first and third periods. From these positions, the Wajutsu Keishukai bruiser piled on the punches and short elbows to win a sound unanimous decision.

Long since considered a journeyman in Pancrase, Hoshino’s drop to featherweight has been a rebirth for the wrestler, as evidenced by his wins over highly regarded featherweights Antonio Carvalho and Takeshi Yamazaki. Nishiura’s road to the finals likewise saw him besting competitive names such as Jong Man Kim and Fanjin Son.

In the bantamweight tournament final, Takeya Mizugaki bested former Shooto 132-pound champion Masahiro Oishi for the title. Though Oishi put on a spirited, come-from-behind performance against Tetsu “Hadairo” Suzuki in September to get to the finals, he proved no match for Mizugaki, the 2005 Shooto rookie MVP.

Mizugaki picked Oishi apart in the first stanza, taking his pick of low kicks or combinations on the feet while Oishi covered up and ate the punishment. It was just a matter of time until a big knee from the clinch to Oishi’s nose dropped him to the mat. Mizugaki swarmed as Oishi scrambled to evade. Mizugaki proved relentless, however, maintaining dominant position while dropping more and more punches until the referee was forced to intervene at the 57-second mark of round two. 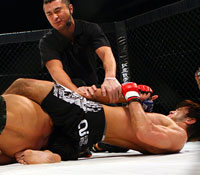 Daniel Herbertson/Sherdog.com
Tomonari Kanomata submits
Eriya Matsuda.
Lightweights Tomonari Kanomata and Eriya Matsuda looked ready to kill each other from the opening moments of their bout. Careening into each other with flurries and kicks, it was a big Matsuda knee that dropped Kanomata flat on his posterior. Matsuda lunged forward to finish off his opponent, but Kanomata was ready, pulling him into a tight armbar. As neither man had worked up a sweat by this point, Kanomata’s grip stuck while he wrenched back the arm for the tap at just 30 seconds into the first round.

Motoki Miyazawa and Shigetoshi Iwase’s welterweight clash came down to the grappling, as neither man had an advantage on the feet. Both planted hard shots on each other’s face, but it was the grappling prowess of Miyazawa in the latter half that shone through. Taking Iwase’s back and dropping a stream of punches to an open cut on Iwase’s forehead midway through, it was just a matter of time until Miyazawa worked the cut enough to warrant the TKO. That stoppage came at 1:47 in the third, as Miyazawa viciously elbowed Iwase’s cut from the bottom in guard.

Despite body kicks and punches, an unfazed Wataru Miki drove forward under fire to finish Masaaki Hasegawa midway through the third period. Hasegawa danced around the cage, circling out and driving jabs and kicks into Miki’s body. Miki stood his ground in the center, pawing at the Krazy Bee fighter until he worked up the courage to charge in for the takedown. Miki’s big chance came halfway through the third, where after passing to side mount, he rained big elbows and knees to the body before spinning into the fight-ending armbar at 1:40.

In the evening’s sole flyweight bout, Takeyasu Hirono defeated Yoshihiro Matsunaga after three rounds of grappling dominance by Hirono. Spurred on by the extremely vocal cheers and cries of his wife, Hirono caught takedowns to land in mount, side mount and back mount throughout all three rounds. Though Matsunaga was able to fend off the chokes and armbar attempts, he ate bunches of small punches and elbows under Hirono, who won a unanimous decision.

Kenta Takagi took out Keitaro Maeda, pounding out the crowd favorite at 1:30 into the first round. Maeda charged forward early with piston punches, eating several himself on the way in. He continued to chase Takagi, but a Takagi right jab followed by a flying right knee to the ribs took the wind out of him, dropping him flat. Takagi pounced on the fallen Maeda, pounding on him until the referee saved him.

Nobutaka Hiyoshi recklessly pressed forward trying to knock out Wataru Takahashi, but soon learned that his standup was no match for Takahashi’s better grappling. Takahashi sucked Hiyoshi down to the ground and passed effortlessly to mount and back mount, where he punished him with punches and chokes. Sapped from fighting off the chokes, Hiyoshi’s aggression decreased round after round -- a clear sign to all three judges to give Takahashi the unanimous decision.

Yoshiaki Takahashi also took a hard-earned majority decision over Shinpei Sotoyama. Though Sotoyama showed decent grappling control, Takahashi scored big on damage points, sending up hard knees in the clinch whenever Sotoyama tried to pull the fight to the floor. As such, two judges ruled the bout for Takahashi, while one dissenting judge ruled the fight a draw.