RIO DE JANEIRO, Brazil -- If you need to train top-level jiu-jitsu, there is no better place than Rio de Janeiro.

UFC middleweight champion Anderson Silva knows this well, and that’s why he’s in Rio getting ready for his April 18 title defense against Brazilian jiu-jitsu black belt Thales Leites at UFC 97.

“I’m studying Thales’ fights, imitating his way of fighting, in order to help Anderson,” explained GalvÃ£o, whose left eye was purple after a hard sparring session on Feb. 10. “This is the result of two high kicks. He hit me while I was trying to take him down. Anderson never stops and changes his base all the time, which makes him hard to clinch and take down. I admire Thales a lot, but I would bet all my money on Anderson.”

In early February, GalvÃ£o was the highlight of the Brazilian ADCC Trials. He submitted five of his six opponents to earn a spot in the 88-kg bracket of the submission wrestling tournament. 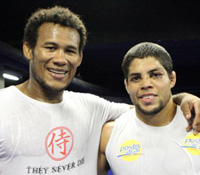 
“If ADCC 2009 is really confirmed for September, I may compete. But now my main focus is MMA, and Anderson is helping me a lot,” said GalvÃ£o, who is confirmed for the 76-kg Dream grand prix in April. “Training every day with him, Jacaré, FeijÃ£o and sometimes the [Nogueira] brothers, I feel I’m in the best place in the world for a MMA fighter.”

Jacaré, who has defeated Roger Gracie twice in submission competitions, is also happy to be part of Silva’s training.

“I didn’t get adapted at Xtreme Couture, but I was having nice training with Saulo and Xande Ribeiro in San Diego,” he said. “Actually I came here invited by GalvÃ£o just to visit him, but Anderson and the whole group treated me so well that I decided to stay. Now I’ve been training with them for almost two months.”

Jacaré is also scheduled to fight in Dream in April. The bout will not be a rematch against Gegard Mousasi, as many have thought.

“Mousasi went up to fight in another division. I don’t know who will be my opponent, but I’ll be ready for him,” said Jacaré, who has a record of 10-2 in MMA.

Asked for his opinion on the title bout between his new training partner in Silva and the Nova UniÃ£o black belt in Leites, Jacaré didn’t hesitate: “I hope Anderson gives 1,000 percent in this fight and brings one more victory to us.”