As the UFC nears 100 shows under the Zuffa LLC banner, quality has become the one characteristic upon which fans can count -- quality fighters, quality fights and no 8-foot-tall Mongolian wrestlers battling tae kwon do gold medalists.

All the planning in the world, however, only delays the inevitable. Put on enough fights and you better believe you will end up with some that make a Zac Efron movie seem exciting. As long as it happens when no one’s watching, no one cares. Put on a snoozer of a main event, though, and you have what amounts to an 18-car pileup worthy of some cheesy 3 a.m. FOX car crash highlight reel, hard to watch but impossible to look away from.

When I try to interest people in amateur wrestling, the number one complaint I receive in return centers on matches being too short. In response, I make them sit through this fight. No one needs to watch 25 minutes worth of wrestling, especially when it’s as dreadful as it was in this matchup.

Between the completely pedestrian wrestling and boring top control (read: lay and pray), this fight was so bad that you actually got sucked into it by thinking it had to improve at some point. After all, Ortiz’s light heavyweight title was up for grabs and that alone should have provided some inspiration. Before you knew it, a half hour of your life was gone and all you had to show for it was a pair of bloodshot eyes.

Sure, Matyushenko was brought in on short notice to replace the chronically injured Vitor Belfort, but this was the first UFC event with Zuffa calling the shots and it was the first mixed martial arts event sanctioned by the Nevada State Athletic Commission. After the debacle, we’re lucky the Fertitta brothers did not sell the UFC at a pawn shop for 20 bucks and matching gold chains. 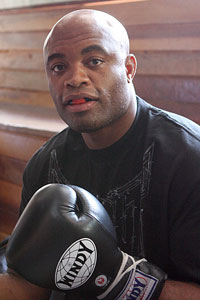 Fans and analysts alike love revisionist history, especially when it comes to their own fight predictions. The day after a big fight, everyone claims they saw the end game coming from a mile away. Well, no one saw this one coming.

It was universally agreed upon that either Leites would expose Silva’s supposedly faulty jiu-jitsu or Silva would remove Leites’ head from his shoulders. Instead, we got five rounds of Leites guard flopping like some jiu-jitsu rookie and Silva doing a glorified version of Mr. Miyagi’s wax-on-wax-off routine. I assume most readers have seen this fight already; if you’re one of the lucky few who has not, keep it that way.

After trading spectacular finishes in their first two fights, there was no way the rubber match in the Sylvia-Arlovski trilogy was not going to be another heavyweight slugfest for the ages. As it turns out, both guys came into the match hell bent on not getting knocked out. While no one wants to get his or her brain punted into the third row, every fighter has to make peace with the fact that his or her chosen profession falls in the domain of broken bones and scrambled synapses.

Refusal to acknowledge that concept leads to fights like this one, a seeming eternity of halfhearted kickboxing and sloppy ballet. Not even an obvious knee injury sustained by Arlovski mid-fight was enough to get Sylvia to do anything except flick his jab and bob his head around like a teenaged boxer trying to imitate Jack Dempsey. The only bright side to this fight was that it was one of several that made the UFC reconsider its would-be heavyweight standard bearers.

When you put two fundamentally sound, strategically minded fighters in the same cage, you hope it results in some top-notch mixed martial arts. Of course, you risk them canceling each other out and ending up with a stalemate.

The UFC paid for its gamble with a three-round impasse as the main event in its new Spike TV fight series. From the opening bell, it was plain to see that Marquardt and Salaverry went into the fight knowing the winner would be lined up for a run at the middleweight title. However, they seemed more concerned with the prospect of a loss and the one-way ticket to the preliminary card that could accompany it. By the closing bell, fans were hoping to never see either fighter again.

MMA fans do not like having their intelligence insulted. They traded tapes and hooked up ginormous satellites just to stay up to date on the sport back when the UFC was off pay-per-view and relegated to tiny arenas just north of the middle of nowhere. These are not the fans to which you want to sell a false bill of goods.

When the UFC came up with the bright idea to set up a catchweight fight between then welterweight champion Matt Hughes and a 39-year-old Royce Gracie, the fans smelled a cash grab -- and rightfully so. Even a physically prime Gracie had no business being in the same cage as Hughes, and no one needed to see a jiu-jitsu player that had eschewed cross-training nearly his entire life get pounded out by a modern mixed martial artist.

The only thing worse than a boring fight is an anticlimactic one, and nothing could be more anticlimactic than watching this bout go down after spending years observing the sport’s evolution.