LIVERPOOL, England -- Amidst the looming corrugated factories of the Alfred Street industrial park and the quiet stretch of rail that links Manchester to Liverpool, the Kaobon gym stands adorned in signs of quiet success.

The walls of the foyer are covered by merchandise, and magazines featuring the gym rest across two rows of tables and chairs. Framed posters of UFC events where Kaobon was represented hang above the door.

A small ring and cage fit neatly against the near wall. Six perfect white circles punctuate an otherwise encompassing black padded floor. Groups of three are assigned to each circle.

In one, UFC lightweight contender Terry Etim works from his back. Deep into preparation for an April 10 showdown with Rafael dos Anjos at UFC 112, Etim’s lean frame contorts and shifts beneath a larger opponent until their positions are reversed. The slippery sheen of sweat stains the contest on the mat.

In another, Paul Taylor reinforces his “Relentless” nickname, opting to stand throughout his rest period. He presides over the young grapplers around him, offering instruction and encouragement. Taylor, who is also scheduled for UFC 112 against IFL veteran John Gunderson, is a relatively new addition to the team, having relocated from the West Midlands late last year. His dark shirt is soaked through and clings to his back, the large tribal tattoo that consumes his torso and left bicep creeping from under.

Founder and head trainer Colin Heron signals for the groups of three to rotate. A quizzical call comes from the far end of the gym. It is unbeaten British prospect Paul Sass. The 21-year-old has been tabbed as Britain’s brightest lightweight prospect behind a 10-0 pro record. The first seven of those ended with his patented triangle choke, which has been dubbed the “Sassangle.”

“Was that six minutes?” he asks, clearly not noticing.

After a further round of rotations, Heron instructs those present to commence a rigorous cool-down period. He leaves the gym floor for the locker room, safe in the knowledge that no shortcuts will be taken in his absence.


Originally opened in 2002 as Fighters and Fitness, Team Kaobon is the fruition of Heron’s desire to develop a comprehensive martial arts training facility.

“When I opened my own academy, I wanted to cover all combat sports,” Heron says. “I was keen to get an MMA team started six, seven years ago when I first opened a full-time place, and it’s just progressed from there.”

A respected muay Thai practitioner under the tutelage of Master Sken, Heron cuts an imposing figure. His lantern jaw and steely glare recall a drill sergeant, but they belie the methodical approach that has driven the gym forward.

“Kaobon originally started out as a pure muay Thai gym,” Heron continues. “I’ve been doing Thai boxing for over 30 years, teaching it since I was 15. We’ve always been successful. Now as MMA seems to be taking over, we’ve got 10 times as many MMA fighters as we do Thai boxers. The lessons here are huge. Evening classes can carry 110 people; we’re constantly updating and putting extra classes on to accommodate it. There are new people daily.”

As Heron talks, Paul Kelly, another UFC lightweight, emerges from the showers. In a grey cotton tracksuit, gear bag slung over his shoulder, he playfully pesters Heron for tickets to a forthcoming muay Thai event in Manchester.

Like Etim and Taylor, Kelly is also on the UFC 112 card in Abu Dhabi, where he’ll meet once-beaten Matt Veach on the undercard. And also like Taylor, Kelly is a new edition to the team, coming over from the more well-known Wolfslair Academy that produced Michael Bisping.

“At the Wolfslair the management get too involved,” says Kelly, who left Wolfslair in the wake of a contract dispute that is yet to be resolved. “I miss the head coach Mario ‘Sucata’ [Neto], but here is just a better team. There’s no management trying to do you over; this is just a gym. You come here, you pay your keep, you train. It’s simple.”

After putting together a 3-4 mark in the UFC, Paul Taylor sought change. Coming off a loss to unbeaten Brit John Hathaway at UFC 105 in November, “Relentless” opted to drop to 155 pounds and saw Team Kaobon as his key to regaining a competitive advantage.

“The quality of training partners here is the reason I joined,” explains Taylor, whose gentle Midland accent separates him from the rest of the camp and immediately puts you at ease. “I felt like I wasn’t progressing, so I moved up to here. … In my eyes it’s the best full-time gym there is. In the morning session there is 20-plus guys in here; that’s most people’s evening classes.” 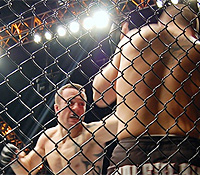 File Photo/Sherdog.com
Kelly & Taylor share a bond
from their war at UFC 80.
Taylor knows from experience the caliber of fighter he now trains with. He and Paul Kelly shared a memorable bout at UFC 80 in January 2008. They made each other $35,000 richer with “Fight of the Night” bonus money, and made the UFC’s Ultimate 100 Fights countdown. Yet Taylor insists that it has yet to be mentioned now that they share the same gym.

“It’s never brought up, to be honest,” says Taylor, who lost that night but harbors no ill will. “We know that when we get in there and spar that we are good training partners.”

For the gym’s flagship fighter, Terry Etim, Kaobon has always been about geography. The camp is five minutes from his home.

“I’m very lucky that a gym this good is so close,” says Etim, his hands still wrapped from the training session. Etim’s tone is hushed, his shoulders slumped slightly. He holds the modest posture of one unaccustomed to media interaction, despite seven fights in the UFC. “You’ve got people traveling from all over the country to train with us. I believe it’s the best gym in the country.”

Just three years ago, Etim was a skinny 21-year-old expected to be cannon fodder for an unbeaten Matt Grice at UFC 70, the promotion’s return to Britain. Now he’s riding a streak of four victories and two successive “Submission of the Night” honors. Fighting on the main card at UFC 112, another impressive performance will entrench the 24-year-old Etim firmly in the UFC lightweight mix.


Since Etim’s victorious UFC debut, Kaobon and Etim himself have become symbols of Liverpool’s embracement of MMA, the latest in a long lineage of great fighters hailing from the port of the River Mersey. The great champion boxers of the past, such as John Conteh, are canonized and celebrated in this part of the world for their flamboyance and joie de vivre in and out of competition.

“Liverpool has always been renowned for producing fighters of some description,” Heron says. “It’s what the people here are like. They’re very passionate, so if they do find something that they like, they put their heart and soul into it. I think Liverpool’s got a big history in fighting. … Liverpool was a boxing city first, and that’s where it comes from. MMA is going the same way. There are gyms all over Liverpool popping up.”

More than most cities, unique cultural identity informs Liverpool. A traditionally deprived area of Britain, in recent times the city has received an injection of investment allied to its position as European capital of culture in 2008. It is far removed from the riots and strikes that marred the closing decades of the last century.

“
Liverpool was a boxing city
first, and that’s where it
comes from. MMA is going the
same way. There are gyms all
over Liverpool popping up.


The city would seem to be the ideal incubator for prospective mixed martial artists, with a reputation for producing resolute, warm and combative inhabitants.

“We’re just tough people in general,” says Kelly, the yellow contour of a bruise shading the area below his right eye. “It’s in our nature. It’s sad because it makes some areas worse to live in, but it is just a raw toughness of determination.

“Back in the day, with the docks, it was a very poor city and I think that that toughness has carried over,” Kelly continues. “My granddad was always a tough bastard, and my nan’s an old thief. She can’t go into a shop now even at her old age without putting something in her pocket, but that’s because they are so used to being like that. They always had to survive whichever way they could.”


Kelly embodies the spirit of Liverpool. Equal parts combative wit and warm honesty, his open attitude around the gym complements the more reserved characters such as Etim and Sass. His “Tellys” nickname derives from a long-standing joke that he walks as if carrying a stolen television under each arm. I can’t say that I noticed.

A prospering local scene has also emerged in the area, complementing the burgeoning roster of gyms that include Kaobon, Next Generation and the nearby Wolfslair.

“It’s critical,” Heron says of the importance of a strong local fight scene, which has helped Etim earn 16 bouts under his belt at the age of 24. “You always have to have new talent coming through. Otherwise the sport would stop straight away. You’ve always got to be producing new talent, and that new talent has to get experience.”

Paul Sass is the one everyone knows about, but Heron assures there’s “another seven or eight” that could be elite-level fighters.


The team is called together for a photo, and Kelly loudly baits the photographer: “Are these for your personal collection?” The group breaks from their poses in stitches.

Perhaps the greatest indication Kaobon has blossomed into an elite gym is the fact that teammate-versus-teammate propositions in the UFC are now realities. The fighters are keenly aware that a time may come when they could be asked to fight one another.

“I would never want to fight a teammate,” Etim asserts, his placid tone rising for the first time. “We train together every single day. As well as being teammates, we’re close outside the gym. We go out together. What people don’t realize is you can play football, you can play rugby, but you can’t play fighting.”

Kelly, eavesdropping from his seated position against the ring, extends a hand to Etim in agreement. If the success of Kaobon and its fighters continues, their stance is one they could be forced to defend. For now, though, nothing could better reflect the sentiment throughout the gym than a handshake.