In a sport where finality is delivered through scrambled synapses and mangled limbs, lessons are learned at the expense of undefeated records and oversold hype. Strikeforce “Houston” was an especially cruel example of this. Here are some of the tough lessons learned from an absolutely wild night of fights.

Get Your Refs Right

Jon Schorle put together an epic night of horrific refereeing, and it’s Bobby Lashley who paid and continues to pay the price. Kerry Hatley is to blame for the two late blows Jorge Gurgel ate that likely cost him a few childhood memories and PIN numbers.

Taken in conjunction with the galling incompetence of the referees on the recent Strikeforce Challengers 10 card, it becomes clear that Strikeforce can’t trust local athletic commissions to handle their business. Bringing in John McCarthy for title bouts just isn’t cutting it anymore, as the likes of Schorle will inevitably make their presence known -- safety of fighters be damned.

We’re talking about a commission that couldn’t even make pre-fight drug testing happen, and Strikeforce stood idly by and allowed that to happen. The folks in charge had to know that the Texas Department of Licensing and Regulation doesn’t usually test fighters, and knowing that, they made no effort to conduct independent testing. Unless Strikeforce has no problem with being on par with America’s most unwanted commissions, they need to at least get some consistent standards and stick to them.

The Emperor Has No Clothes & The King Has Bigger Problems 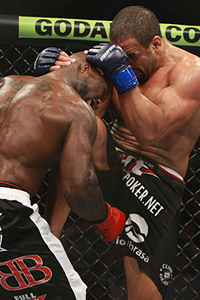 Dave Mandel/Sherdog.com
Lawal was shocked by "Feijao."
When Muhammed “King Mo” Lawal won a clear-cut five-round decision over Gegard Mousasi to claim the Strikeforce light heavyweight title, the rest of his time in the promotion was supposed to be a cakewalk. There wasn’t a soul in Strikeforce’s 205-pound class that would have been labeled a favorite over Lawal going into Saturday night.

By Sunday morning, Lawal had gone from unquestioned ruler to another contender. While he certainly has the talent and dedication to make another climb up the ranks, the arrogance he showed not with his words but his fighting was disconcerting. Usually a disciplined boxer with unstoppable chain wrestling skills, he ignored both in favor of flashy stances and trying for rollercoaster slams.

Full credit goes to Feijao for capitalizing on those mistakes and putting together the most complete performance of his career. Any way that fight is viewed, the only conclusion is that Feijao earned the win while Lawal fought like he expected to win.

Jacare Is Special: Too Bad Strikeforce Doesn’t Realize It

On the one hand, you have an American fighter in Tim Kennedy with solid, well-rounded skills but hardly the sort of ability required to be a cornerstone champion. On the other you have a Brazilian in Ronaldo “Jacare” Souza with all-universe grappling skills, an atomic overhand right and a sky-high ceiling.

If you’re Strikeforce, you bank on the American because he has a good story, set the fight in his home state and then end up with him losing a lopsided decision and a Brazilian champion getting booed the second the belt hits his waist. As for the American you banked on? He acts like a prima donna in the post-fight interview and appeals to the worst in biased fans while bashing judges who actually scored the fight accurately.

The final verdict is some wasted advertising for a contender and then a champion who got short shrift because he’s not a former Army Ranger. We can only hope the lesson Strikeforce took from this minor disaster -- at least in comparison to the full-scale disasters on this card -- is the same lesson everyone else knew coming into the evening: A great story does not a great fighter make.

Three-Man Booth is a Three-Man Nightmare: Gus Johnson, Mauro Ranallo and Frank Shamrock make for the most mismatched trio in the history of trios. Worse yet, the in-booth sniping during the event’s second half clearly showed just how much these three dislike each other and was perhaps the only thing that overshadowed Shamrock’s attempts to equate professional wrestling to MMA.

Sideburns>All: Chad Griggs entered the cage to take on Bobby Lashley with two things -- some sweet sideburns and a ballsy game plan. He made life hard on Lashley, tired him out and pounded him into a wobbly, bleeding mess. Too bad Jon Schorle’s incompetence will continue to render Griggs’ work an afterthought.

More Prelims Please: I’m a Sherdog employee and I was fully expecting the site’s attempt to stream Strikeforce prelims live to be the same disaster that was EA’s earlier attempt to do the same. The stream came together mostly glitch-free and should become a platform for Strikeforce to develop homegrown stars. The key word there is “should.”

Follow Tomas Rios in his quest to prove that fluoride in tap water is a government mind control conspiracy on Twitter at www.twitter.com/Tomas_Rios