Strikeforce does not have the rub of the green in 2010. From poor attendance at Strikeforce “Miami” in January to the Nashville, Tenn., brawl in April and promotional superstar Fedor Emelianenko’s decisive loss in June, it certainly could have gone better for CEO Scott Coker & Co.

What happened: Lashley, a former World Wrestling Entertainment superstar, has had to cope with the huge expectations MMA fans and promoters had for him ever since he first set foot in the cage. On Saturday, he faced an opponent who had little name value but all the desire necessary to author a major upset. Lashley came out of the gates in his familiar style, taking down Griggs and controlling him on the mat. Late in the first round, Griggs caught Lashley shooting in and cut him below the eye.

In the second stanza, Lashley wowed the crowd with a big slam and went to work from the full mount. Already midway through the round, it appeared he lacked the gas tank needed for a big finish. When the referee restarted the fight standing with 50 seconds left, Lashley was exhausted. Griggs smelled blood, stuffed a takedown and unloaded a series of punches and hammerfists. With his stamina shattered and his face badly cut, Lashley retired seconds after the end of the round.

Forecast for Griggs: After derailing Lashley, Griggs deserves the chance to move up the heavyweight ladder by taking on another one of the promotion’s more carefully groomed prospects -- Shane del Rosario or Lavar Johnson. There might also be interest in a fight against former headliner Brett Rogers.

Forecast for Lashley: The 34-year-old behemoth needs more time to refine his game. While his wrestling and position game on the ground are already excellent, he has to pick up some submissions to make his arsenal more dangerous. Conditioning remains his biggest battle. The defeat makes a Lashley-Dave Batista matchup more likely, but if Strikeforce cannot put that fight together, it needs to feed Lashley opponents with similar experience. Lolohea Mahe and Daniel Cormier come to mind. 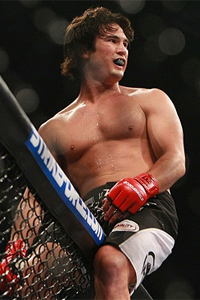 Dave Mandel/Sherdog.com
Noons (above) wants Nick Diaz.
What happened: An entertaining fight ended on a bit of a sour note, as Noons used power punches and a glancing illegal knee to put away an already battered Gurgel. The former EliteXC champion was hesitant to land more blows on his downed opponent, and referee Kerry Hatley was slow to intervene. Otherwise, it was a largely dominant performance and a clean win for Noons.

Prior to the finish, the flamboyant professional boxer once again showed why he has some of the best hands in MMA, as he methodically took apart Gurgel on the feet. Noons mixed in a couple of leg kicks and also went to the body with clubbing blows, something not often seen in MMA. Gurgel hung tough in the first round but came into the fight with the wrong game plan, especially after Noons showed glaring deficiencies on the ground in his previous encounter with Conor Heun.

Forecast for Noons: The name of Strikeforce lightweight champion Gilbert Melendez has been thrown around, but Noons expressed a desire to move up to 170 pounds to challenge Nick Diaz for the welterweight title. Noons stopped Diaz on cuts in their 160-pound catchweight fight back in 2007.

Forecast for Gurgel: The 33-year-old Brazilian jiu-jitsu black belt has always engaged in exciting fights. However, he has come up short in five of his last seven bouts and was knocked out for the first time in his career; he needs to make victory his number one priority. If Strikeforce keeps him onboard, it will likely be against someone like Bryan Travers, Shamar Bailey or Vitor Ribeiro.

What happened: Souza’s hands have come a long way since he started as a pure jiu-jitsu fighter seven years ago. For 25 minutes, he outboxed Kennedy, spending only limited time on the ground in his unanimous decision victory. After running into an upkick from Gegard Mousasi in his first major MMA title bout, the Brazilian employed a more conservative approach, only trying for two takedowns the entire fight. Kennedy had most of his success in the second and third rounds when he landed takedowns of his own. However, he could not hold down the BJJ black belt for long. Overall, “Jacare” looked more confident and commanding throughout the fight. Another factor that seems likely to have swayed the judges was a big overhand right that cut Kennedy above the left eye midway through the third round.

Forecast for Souza: There are plenty of potential fights for the new champion moving forward. He could face Jason Miller in an unnecessary rubber match. He might also take on rising star Luke Rockhold, provided the 25-year-old American Kickboxing Academy product makes it past Olympic wrestling silver medalist Matt Lindland. Most intriguing, however, would be a rematch against Mousasi. Strikeforce would need to convince the young Armenian, who has ballooned all the way to 220 pounds for some of his recent fights, to return to middleweight.

Forecast for Kennedy: A rubber match against Miller might also be an option for Kennedy; they have split their first two fights with one another. Other potential foes for the United States Army sniper include the Minnesota Martial Arts Academy’s Paul Bradley and fellow International Fight League veteran Benji Radach.

What happened: Finding the right range was crucial in this battle. “King Mo” enjoyed a reach advantage but had to stay out of the Brazilian’s kicking range. The champion’s dominant wrestling skills were offset, in large part, by the challenger’s excellent use of the Thai clinch, which triggered the end of the fight. Lawal pressed forward to work some dirty boxing, and “Feijao” landed two powerful knee strikes to the chin and a left-right combination that sent his opponent crashing to his backside. Lawal survived a series of punches by instinctively shooting for a single-leg takedown but was stopped by repeated unanswered elbow strikes to the temple.

Forecast for Cavalcante: Mike Kyle and Gegard Mousasi can be used as stopgaps until “King Mo” picks up a few wins and primes himself for another run at the title. Dan Henderson, who plans to return to the 205-pound division for the first time in more than three years, could also challenge for the belt. Following his loss to Jake Shields in April, Henderson may need a win over Renato “Babalu” Sobral in order to lend more credibility to another shot at Strikeforce gold.

Forecast for Lawal: The rematch against Mousasi seems an obvious choice, even though the Armenian has much more to gain from another crack at Lawal. Otherwise, Strikeforce could throw the former champion into a match against Ron Humphrey or Scott Lighty, another above-average striker.