In the grand tradition of the great British thugs -- media-proclaimed “hard men” like Lenny McLean, Charlie Bronson and Mark Brandon Read -- Lee Murray is moving through the ranks like Parliament was waiting at the end. I have never heard of a man so driven to occupy a jail cell or a morgue with such urgency. (The closest American equivalent: probably Steve-O.)

If you’ve only come into mixed martial arts via the hyper and Xyience-plastered “Ultimate Fighter” era, you’ve likely never seen Murray fight. He had long, corded muscles, a severe expression and a militant attitude. He hit very, very hard and he shocked the hell out of virtually everyone when he went and submitted Jorge Rivera with a triangle choke in his first and only UFC appearance. All said, he fought about 10 times and won most of them. In what would become his career finale, he was smacked around by Anderson Silva. He took Silva the distance, though, and that didn’t happen again in 13 fights.

Fighting was Murray’s day job: He moonlighted as a hoodlum. (Or perhaps it was the other way around.) He was a doorman -- almost all of the UK toughs start as doormen -- and racked himself up some good pub stories that almost always ended with Lee running from police while a smart-assed antagonist was brushing dirt off his disembodied teeth. In 2005, he squeezed another good tale out of a bar brawl, but this one cost him a few pints of blood: Stab wounds punctured his lung and clipped his artery. (This is the part where you hear that Murray shouldn’t have lived.) 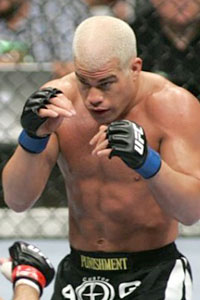 Photo by Sherdog.com
Murray was alleged to have
gotten the better of Ortiz.
It’s a testament to Murray’s ways that a story ending in near-death isn’t even the most interesting of his life. That’s probably a tie between a 2002 street fight with Tito Ortiz -- one which Murray was alleged to have gotten the better of the then-UFC champion -- and a 2006 England bank robbery that netted one of the largest cash hauls in criminal history. Murray fled to Morocco, claimed citizenship (his father is Moroccan), inhabited a palatial estate that featured a giant mural of him fighting Rivera, horded cocaine and was eventually arrested until the mess could be sorted. He was later caught with a laptop and other luxuries in his cell. Because he is Lee Murray, he tried to escape.

Last Tuesday, he simply walked out after being declared a Moroccan citizen, but was promptly recaptured. I believe I have just provided a second act synopsis of the inevitable movie.

All of this melodrama has been a boon to news outlets, all of which consider the presence of a charismatic con bucking the system to be all-purpose fodder. Tabloids? Great. Newsmagazines? Even better -- roll that fight footage. And Murray was built for the movies. Time-Life Inc., which has a deal in place to weave features out of Sports Illustrated articles, started working on a film last year. (It’s destined to be outdated, since it seems impossible Murray won’t think of another way to antagonize his jailers in the interim.)

Why the infatuation? Why are forums filled with people performing the cyberspace equivalent of a jailhouse vigil? Murray (again, allegedly) orchestrated a major heist involving automatic weapons and took a sizable sum he had no legal claim to. From all appearances, he’s a surly and violent man with no regard for the law and a seeming apathy toward human life. (You don’t brandish guns unless you intend to use them for their intended purpose: killing.) He did not give the money to charity. He bought a tacky mansion and decorated it with an eyesore portrait of himself. This is not someone you would consider to be a valuable example of humanity.

There must be something amusing and energizing about observing a display of such hubris in our regulated, starched-collar society. Murray is some kind of human Id, behaving with an utter disregard for consequences. He is Phineas Gage, the man who had an iron bar driven into his head and was forever more a profane, heartless bastard. We all want to tell people off. We all want to walk away from a knife fight. We all want $92 million. Murray did something about it.

“Public Enemies” is a film opening shortly. It’s the story of John Dillinger, with Johnny Depp starring as the charismatic bank thief too charming to be thought an amoral bastard. I get the sense that Americans mired in the great Depression read about Dillinger’s exploits -- which included the murder of police -- with a guilty and quiet reverence. Now here we are in an economic tar pit of new design, and here comes Lee Murray, who was pretty damn close to enjoying the good life after an audacious heist. This isn’t hero worship. This is wish fulfillment.