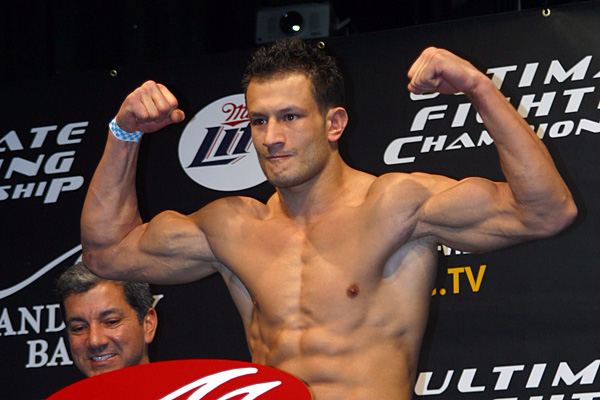 
Long before his name became synonymous with the February 2006 Securitas Depot robbery of approximately $92 million in Tonbridge, England, “Lightning” Lee Murray was little more than an up-and-coming mixed martial artist with high hopes and humble beginnings. Now, five and a half years after what some call the heist of a lifetime, the future of this married father of two wanes like a candle in the wind while he serves 25 years in a Moroccan prison.

All seemed lost for Murray when the 10-year sentence he was issued in June 2010 was upped to 25 years at his appeal in December, but the one-time UFC middleweight managed to pull another rabbit out of his hat. On July 24, England’s Sunday Mirror reported: “Robbers convicted of Britain’s biggest cash heist could win a retrial after a forensics officer on the case was found guilty of destroying evidence. The officer who collected the masks the gang used in the pounds 53 million Securitas robbery in 2006 has been disciplined for accidentally disposing of evidence in another case.”

“This has implications for all those serving sentences for the robbery,” he said. “We are seeking guidance from counsel on this.”

During the heist, two of the gang members posed as police officers to abduct Securitas Depot Manager Colin Dixon, while others held his wife and 8-year-old son hostage at their home in Herne Bay. While his alleged co-conspirators were falling like dominos back in England, Murray’s post-incident roller coaster adventure first took an international turn when Sports Illustrated ran the article “Breaking the Bank,” by L. Jon Wertheim, in its April 14, 2008 issue. The stakes grew even higher when Time, Inc., announced four months later that it had entered a partnership agreement with a production company that was turning Wertheim’s article into its first full-length motion picture.

Variety took the next turn through the update turnstile on Sept. 21, 2009 by adding that Howard Sounes’ non-fiction book, “The Heist: The Inside Story of the World’s Biggest Robbery,” was also included in the rights package for the project, which is being financed by XYZ Films. According to IMBD.com, director Darren Aranofsky -- “The Wrestler” -- and writer Kerry Williamson -- “Fork in the Road” -- are attached to “Breaking the Bank,” as well. Protozoa Pictures and “Black Swan” producer Scott Franklin have also joined the effort alongside “Frankenstein’s Army” producers Nick Spicer, Nathaniel Bolotin and Aram Tertzakian and “Beyond a Reasonable Doubt” executive producer Aaron Ray. Currently, the movie is listed as “in development” after the team submitted an outline on Sept. 22, 2009 and a final script six months later. 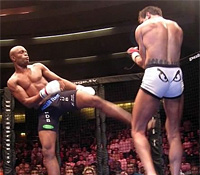 Pedro Wrobel
Silva outpointed Murray at Cage Rage 8.
Innuendos and assumptions have surrounded the project from the start. An article in the October 19, 2008 Sunday Star quoted an “industry insider” as saying, “As for [actor Jason] Statham taking the lead, it’s almost a no-brainer.”

Murray has managed to peek out his head from behind prison walls several times since then, proclaiming his bravado to the Sunday Star in its December 2009 United Kingdom edition. The article was titled, “I’d rather hang tough with the rats in Moroccan jail than risk a trial back home.”


On Jan. 21, 2011, there was also an interview posted on MiddlEasy.com that purportedly took place directly from Murray’s North African jail cell. Despite going out of his way to avoid any talk about the crimes for which he has been convicted, “Lightning” still had plenty to say. Included in the interview was his steadfast belief that he could beat UFC middleweight champion Anderson Silva in a rematch with six months of training, his claim that the book “The Heist” is littered with inaccuracies and his assertion that “[Strikeforce women’s champion Cristiane ‘Cyborg’ [Santos] is a badass.”

Murray also chose to dodge the issue of how the interview was taking place but did answer a question about charging his cell phone battery by revealing that, “I have a power and mains.” He even started the whole discussion with a greeting: “You can send me an SMS on this number -- thanks, Lee.” The author claimed the conversation occurred after a Murray associate contacted him through WorldOverEasy.com, which sells Free Lee Murray T-shirts.

When told Aranofsky had delayed the production because he did not want to jeopardize Murray’s legal appeal and was instead working on “The Wolverine,” Murray said: “I think it might be best that it’s on hold, at least until I’ve finished at the courts. Even still, how can a guy make a film based on my life who knows nothing about me?” Aranofsky, it should be noted, has since backed out of “The Wolverine” project, citing family commitments.

After growing up just off the River Thames in the southeast corner of London, Murray’s rough edges became both a blessing and a curse, fueling the fire that he forged into a career MMA record of 8-2-1, with one no contest. A recurring theme since he was born, he rode his mean streak to a knockout win over Rob Hudson on Dec. 5, 1999 at Millenium Brawl 1 “The Beginning” in his professional debut.

Six fights later, those jagged tendencies surfaced yet again on July 13, 2002. Only this time the focus of Murray’s ire was allegedly Ultimate Fighting Championship light heavyweight titleholder Tito Ortiz. In what would later become his calling card, “Lightning” claimed he and Ortiz squared off in an alley outside a nightclub after UFC 38 in London. According to Murray, he got the better of the exchange after a flurry of unrequited punches to the head and body. In hall of famer Matt Hughes’ book, “Made in America: The Most Dominant Champion in UFC History,” released in 2008, the former UFC welterweight champion recounts the infamous incident as it was told to him by longtime coach Pat Miletich:

“I looked over and Chuck Liddell was with his back against the wall, knocking people out that were trying to go after him. Then I looked over and there’s Tito directly past me, taking his coat off, going after Lee Murray, and Lee Murray’s backing up the alley taking his jacket off. Both their jackets come off, and Tito throws a left hook at Lee Murray and misses, and right as he missed, Lee Murray counters with, like, a five-punch combo, landed right on the chin, and knocked Tito out. OUT. Tito fell face-first down to the ground, and then Lee Murray stomped him on the face a couple of times with his boots.”

After beating Jorge Rivera by triangle arm bar in the first round of his promotional debut at UFC 46 on Jan. 31, 2004 and losing to Silva by decision at Cage Rage 8 almost nine months later, Murray’s life on the professional fighting circuit grinded to a standstill. Instead, after a 21-month absence from MMA, the son of Barbara Murray and Brahim Lamrani found himself fighting for his life outside the Funky Buddha nightclub at a party for a topless model.

Tito Ortiz File Photo
Ortiz was allegedly involved in an
infamous street fight with Murray.
According to the September 28, 2005, edition of London’s The Evening Standard, Murray “was stabbed repeatedly in the chest, puncturing his lung and severing an artery.” On September 30, 2005, The Mirror also revealed that he was accused of battering David Meyer, of London, into a coma during a road rage incident on Christmas Day in 2003. The charges were later dismissed when the jury failed to reach a verdict.

Soon after, the proverbial s--- hit the fan. On March 17, 2006, The Sun reported that “cage fighter Lee Murray is being sought by police over the pounds 53 million Tonbridge raid. But the 28-year-old is thought to have disappeared to Spain. Detectives have said they wanted to talk to Murray, but his family and manager have said they have no idea where he is.”

With Murray’s Moroccan citizenship firmly entrenched by law -- his father was born there -- the chase was on, but it did not take long before the next chapter in this ever-evolving saga reared its ugly head.

According to the June 26, 2006 edition of the Birmingham Post, “Lee Murray was detained in the capitol of Rabat on Sunday. He was one of four men arrested by Moroccan police at the Mega Mall shopping centre. Mohamed Chaker, of the French news agency Agence France Press, said 50 armed police surrounded the shopping centre and closed the exits. Officers slashed the tires of the men’s black Mercedes car with a knife to prevent them [from] escaping,” The report then went on to state that, because the United Kingdom did not have a formal extradition treaty with Morocco, it would have to make a “special, one-off request.”

As one might imagine, Murray’s time on the run was a saga unto itself. According to a posting in the July 1, 2006 Daily Mail, he had grand plans in motion: “It was to be the grandiose centerpiece of Lee Murray’s luxury villa in Morocco: a life-size mural of himself as a glorious cage fighting champion on which he could gaze from the comfort of his whirlpool bath. But while the crudely crafted stonework is in place in his pounds 500,000 mansion, Murray himself is languishing in a high-security prison awaiting extradition back to the U.K., where he faces charges in connection with the country’s biggest cash robbery.”

The one saving grace of Murray’s incarceration, at least from his perspective, was that it put the British government in a race against time if the tree of its extradition effort was ever going to bear fruit. Fortunately for the government, on February 21, 2007, the British Broadcasting Corporation posted an excerpt from the Moroccan news agency MAP website that stated: “The Sale Court of Appeal has handed sentences to Mohamed Alt Hissou and four British nationals (including Lee Ibrahim Murray, Armitage Guerry and Mustafa Basar) ranging from four months to three years in prison. They faced trial for ‘violence against the police,’ ‘possessing and taking drugs,’ ‘aggravated assault’ and ‘usurpation.’”

For his efforts to avoid being detained, Murray was given a sentence of eight months in prison and a fine of 10,000 dirham. While this gave his legal team the time to get him tried under Moroccan law for his British crimes, it also kept him locked down until June 2010, when he received a 10-year sentence for his role in the $92 million Securitas Depot robbery. Like the gambler he has always shown himself to be, Murray knew appealing the sentence could go sideways, but he elected to move forward anyway. In December, he leapfrogged his way to the current 25-year sentence when his original penalty was found unduly lenient by a Moroccan judge.