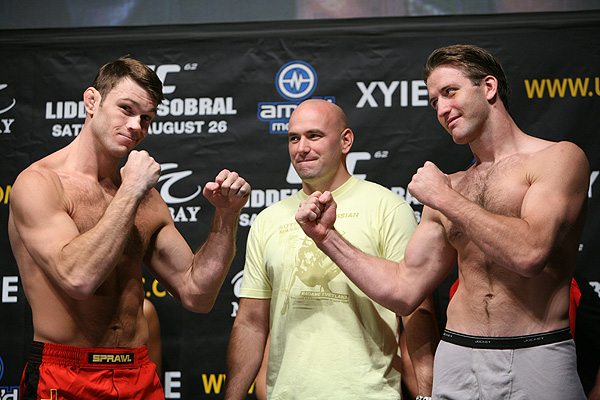 
Shortly after UFC 160 concluded, Ultimate Fighting Championship President Dana White gave the floor to a man who had not competed in nearly 10 months.

“He’s a guy whose charisma, his personality, his fighting style has helped to elevate the UFC and mixed martial arts to where we are today,” White said. “And I truly believe we are where we are [and] had this great event tonight [because] he is one of the guys who has been one of the building blocks in this sport and in this company. Tonight, we are going to announce his retirement.”

What followed was a video montage -- set to “I’m Shipping up to Boston” by the punk band Dropkick Murphys -- that featured highlights commemorating the career of a former Georgia police officer who was a central figure in the most significant bout in UFC history. There was a smattering of polite applause once the brief tribute concluded, but it was nothing like the thunderous reception that had greeted him after his unforgettable Octagon debut.

That was fine with Forrest Griffin. The heavy lifting had been done years earlier, and he was surrounded by peers who were more than willing to carry the torch he had once helped to ignite.

Griffin officially said goodbye to mixed martial arts on May 25, 2013, some eight years after his slugfest with Stephan Bonnar catapulted an organization from life support to prosperity. The UFC 160 post-fight press conference took place at the MGM Grand Garden Arena in Las Vegas, a mere three-mile cab ride from the Cox Pavilion, the site of “The Ultimate Fighter 1” Finale. However, the real journey had been considerably longer and more arduous.

Considering that Bonnar, his partner in reality show immortality, had retired following a loss to middleweight champion Anderson Silva in October 2012, it felt like the end of an era. Back when Griffin first had designs on beating up people for money, the UFC was little more than a curiosity to all but the most devoted combat sports connoisseur. For most, it was an underground phenomenon, akin to a real-life version of “Blood Sport” at best, a cousin of unregulated bar brawling at worst. The notion that a UFC event would someday receive a serious promotional push during an NFL broadcast on major network television seemed laughable.

Today, Griffin and Bonnar are the two figures most commonly associated with the Ultimate Fighting Championship’s meteoric rise to widespread acceptance and mainstream prominence. Their hall of fame induction in July 2013 was more an acknowledgement of their fight’s essential role in the growth of the sport than a nod toward individual achievement. 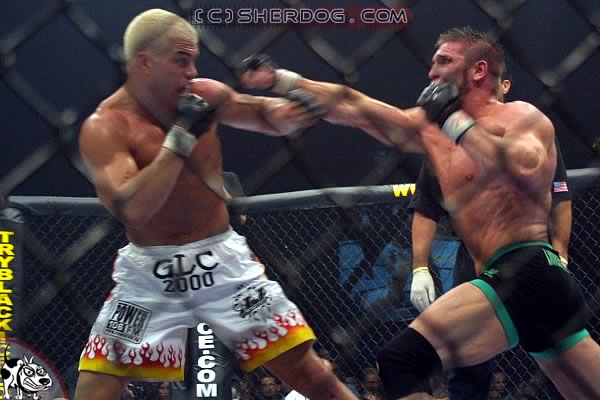 Photo: Jeff Sherwood/Sherdog.com
Ortiz-Shamrock was a high-water mark.
Griffin and Bonnar were far from alone in altering the course of history. Three and a half years before the two light heavyweights unwittingly shouldered the burden of an entire promotion, Zuffa, LLC -- namely Frank Fertitta and Lorenzo Fertitta, a pair of casino owners in Las Vegas, and White, their business partner and longtime friend -- took a $2 million flier on an organization struggling to find its niche in American sports culture.

At the time, the UFC’s reputation as a barbaric, no-holds-barred entity had left it without a viable platform upon which to showcase events.

Spurred by the evolution of a universal set of rules and sanctioning throughout the United States, the promotion returned to a larger, pay-per-view audience at UFC 33 in September 2001; it had been blackballed by most providers four years earlier. Still, buy rates were modest by current standards, with the 150,000 viewers for UFC 40, which featured the first meeting between archrivals Tito Ortiz and Ken Shamrock, becoming the high-water mark.

By 2004, Zuffa was in dire financial straits, as the UFC had lost some $34 million since the change in ownership. On the verge of cutting their losses, the Fertittas and White made a last-ditch effort to save their investment. After several trial-and-error pitches, the Zuffa brain trust and producer Craig Piligian, who had worked on the hit show “Survivor,” sold Spike TV executives on a competition-based, UFC-themed reality show. Sixteen fighters would live and train together in a house while trying to win a six-figure UFC contract.

“The light bulb kind of went off,” said Kevin Kay, the current Spike TV president. “We thought, ‘OK, this is a way to expose fans to the sport and create characters and tell stories.’” 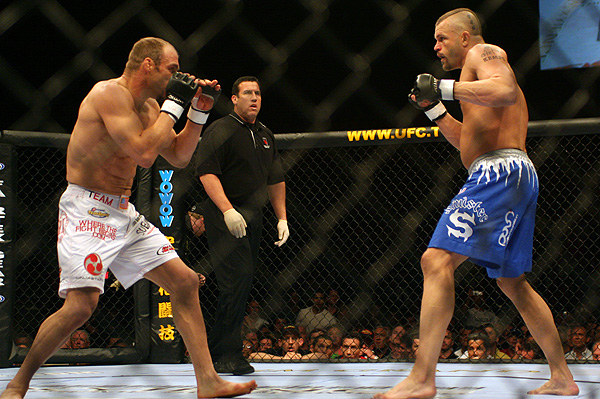 Photo: D. Mandel/Sherdog.com
Couture and Liddell coached Season 1 of TUF.
Even so, Zuffa was left to cover all the production costs for that initial season. Company icons Randy Couture and Chuck Liddell were tabbed as coaches, with their on-screen roles serving to build interest in their UFC 52 rematch, which was scheduled for one week after “The Ultimate Fighter 1” Finale.

Season 1 of “The Ultimate Fighter” featured an eclectic cast of characters, many of whom went on to experience long-lasting success in the promotion, including Griffin, Bonnar, Kenny Florian, Diego Sanchez, Josh Koscheck and Chris Leben.

Cleverly slotted after World Wrestling Entertainment’s “Monday Night Raw,” “The Ultimate Fighter” far exceeded expectations in terms of ratings, averaging more than a million viewers for its premiere. The inaugural season was filled with plenty of pranking, drinking, crying, bonding and, yes, fighting. Through it all, people kept tuning in.

Nothing was more paramount to the lasting success of the show and the UFC than the Griffin-Bonnar final. Tensions were heightened at the time because no one knew if anyone other than the winners – Florian met Sanchez in the 185-pound final – would receive a UFC deal. As a result, Griffin and Bonnar went back and forth as if their livelihoods depended on it. Already bolstered by the influx of viewers who had been watching all season, the broadcast also gained momentum through word of mouth.

When all was said and done, Griffin and Bonnar were awarded UFC contracts on the spot, but the warm and fuzzy feelings did not stop there. Zuffa representatives and Spike TV executives famously stepped out into an alley behind the venue after the bout to negotiate a deal for more seasons and more UFC content on the network. This time, production costs were included.

“It was a good fight, but what made it more than that was the timing,” Bonnar said. “Season 1 came out, and a lot of people weren’t sure whether they liked it or they were going to like it. That fight happened, and a ton of people saw it. It had a really good feel-good ending, with Dana coming in and giving [us] the contracts, and me and Forrest weren’t stereotypical fighters; [we were] both clean cut [with a] good sense of humor. Watching that couldn’t help bring a smile to people’s faces, and I think that’s what helped win people over.”

Buoyed by the appearances of Couture and Liddell on “The Ultimate Fighter,” UFC 52 garnered nearly twice as many pay-per-view buys as Ortiz and Shamrock did at UFC 40. The reality series continued to be a boon to the promotion’s growth in the seasons that followed. Over the years, the show underwent its share of renovations. Team challenges were eliminated in favor of more fights, and the cast was expanded from 16 to 32 to include a 16-bout qualifying episode for each season premiere.

In 2011, the UFC’s 14-season relationship with Spike TV came to a close when the promotion inked a seven-year contract with Fox Sports. The 15th season of the reality series debuted on FX with a new live format on a new night -- it was moved from Wednesdays to Fridays -- but ratings dropped and there was an outcry for a return to the familiar taped setup on a more viewer-friendly day. Season 17 answered those demands by moving to Tuesdays and offering taped episodes with a documentary feel.

“The Ultimate Fighter” has also allowed the UFC to extend its global reach. Two iterations of the program have aired in Brazil, while another pitted fighters from the United Kingdom and Australia against one another. Similar deals in China and India are in the works.

Through it all, the reality show continues to soldier onward, despite criticism that it has grown stale. The strong sense of loyalty to the brand shown by those who were there at the start is easy to understand. Without it, the Fertittas and White would have severed all ties with their shot-in-the-dark venture. Had that happened, “MMA” and “world’s fastest-growing sport” might never have graced the same sentence.

When asked prior to UFC 162 where he would be without “The Ultimate Fighter,” White quipped: “I’d be picking up cigarette butts from the parking lot at Palace Station, and I’d be sleeping on the underpass at I-15.” It was an obvious bit of hyperbole from the UFC boss, but the underlying message was clear. Zuffa’s golden era resulted from forward thinking, risk taking and plenty of heart.