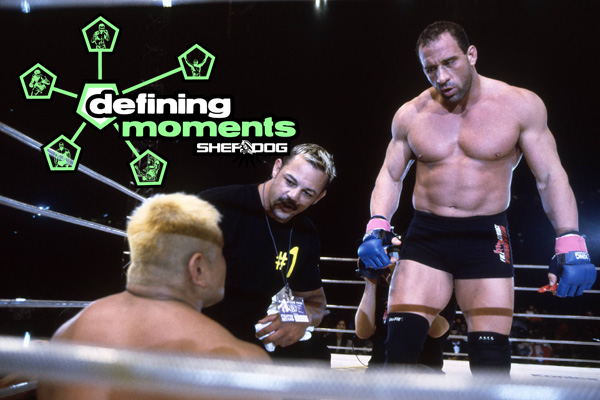 Mark Coleman was the Ultimate Fighting Championship’s first heavyweight titleholder and a true mixed martial arts pioneer. In his prime, “The Hammer” combined takedowns with brutal ground-and-pound to devastating effect. Coleman retired with a 16-10 record following a submission loss to Randy Couture in February 2010.

In a career filled with defining moments, here are five that stand out:


Coleman was an MMA novice when he entered the UFC 10 tournament on July 12, 1996 in Birmingham, Alabama. After defeating Moti Horenstein and Gary Goodridge, “The Hammer” faced UFC 8 tournament winner Don Frye in the final. Coleman’s wrestling prowess was on full display from the start, and he kept Frye pinned to the canvas for long stretches, laying into him with a barrage of heavy punches. Referee John McCarthy finally called off the contest 11:34 into Round 1. Coleman was 3-0, with a tournament title under his belt.


Coleman was 5-0 when he entered his eagerly anticipated UFC 12 clash with Dan Severn for the inaugural heavyweight championship on Feb. 7, 1997 at the Dothan Civic Center in Dothan, Alabama. Severn was on a nine-fight winning streak, and many expected him to get the better of Coleman. However, a little less than three minutes into the match, “The Hammer” executed a neck crank from side control and forced Severn to tap 2:57 into Round 1.

3. Wrong Side of an Upset


In Coleman’s first defense of the heavyweight title, he met Maurice Smith at UFC 14 on July 27, 1997. The general consensus was that the unbeaten Coleman would run roughshod over Smith, a kickboxer who boasted a less-than-stellar 3-7 record as a mixed martial artist. Coleman benefitted from a strong start but soon began to tire against his elusive challenger. “The Hammer” had no answer for Smith’s seemingly endless stream of low kicks, and after 21 minutes, the durable but exhausted Coleman lost by decision. The onetime Olympian went on to lose his next three fights.

4. Top of the Food Chain


Coleman had rattled off three straight wins -- he eliminated Masaaki Satake, Akira Shoji and Kazayuki Fujita -- to reach the final of the Pride Fighting Championships open weight grand prix on May 1, 2000 in Tokyo. There, “The Hammer” battled the most feared striker in MMA at the time: Igor Vovchanchyn. The compact Ukrainian was unbeaten in his previous 37 appearances, with 26 wins by knockout or technical knockout. Coleman’s previous efforts against world-class strikers had not gone well. Many were expecting the same against Vovchanchyn, but Coleman delivered on a sublime game plan and showed the cardio necessary to pull it off. Throughout the contest, he used his superior wrestling and strength to keep his smaller opponent on the mat. The violent conclusion came 3:09 into Round 2, where Coleman slammed a series of knees into the grounded Vovchanchyn’s head from the north-south position. “The Hammer” was at the peak of his powers.

5. Moving Aside for the Next Generation


Coleman carried a six-fight winning streak into his showdown with future Pride Fighting Championships heavyweight titleholder Antonio Rodrigo Nogueira at Pride 16 on Sept. 24, 2001 in Osaka, Japan. A majority of their early exchanges were spent in the clinch. When “Minotauro” slipped after throwing a high kick, Coleman pounced. However, unlike many of Coleman’s previous opponents, the Brazilian jiu-jitsu black belt was comfortable on his back. Nogueira secured a triangle choke, straightened Coleman’s trapped arm when he attempted to stand and forced “The Hammer” to tap 6:10 into the first round. With that, Coleman’s days at the sports pinnacle were over.