Diego Sanchez may not recognize himself in the mirror for days. Such is the price of victory inside the Octagon.

Sanchez won over the only three people who mattered -- the cage-side judges -- inside the 22,000-seat KFC Yum! Center on Thursday in Louisville, Ky., as he took a controversial unanimous decision from the world-ranked Martin Kampmann in the UFC Live 3 headliner. All three judges scored it 29-28 for Sanchez, even though “The Ultimate Fighter” Season 1 winner was a battered and bloodied mess afterward.

Kampmann dictated much of the bout with his stout, technically sound strikes, but he allowed himself to be drawn into firefights in the second and third rounds. That decision, coupled with a timely third-round takedown from Sanchez, appears to have cost him dearly in the eyes of the judges. Kampmann heads back to the drawing board following a second straight setback.

A closer look at four matches we want to see after UFC Live 3 “Sanchez vs. Kampmann” follows:

Diego Sanchez vs. Thiago Alves: No one will ever question Sanchez’s grit and heart. Few have more. However, the mercurial Jackson’s Mixed Martial Arts representative will likely need a few months to recover from his damaging 15-minute encounter with Kampmann, who chopped up his face with punches and knees. In victory, Sanchez seems likely to reclaim his place among the Top 10 welterweights in the world. A fight against Alves, who must first pass a stern test against Rick Story at UFC 130 in May, seems a logical next step for the man formerly known as the “Nightmare.” Alves’ skill set compares favorably to Kampmann’s, though at this stage of his career, he has proven the better of the two in terms of executing a game plan inside the cage. Only two men -- welterweight champion Georges St. Pierre and top 170-pound contender Jon Fitch -- have beaten the American Top Team ace in the last five years. Sanchez deserves a turn.

Mark Munoz vs. Alan Belcher: Munoz has made considerable strides as a mixed martial artist, and it shows in his results. His 54-second knockout over “The Ultimate Fighter” Season 7 finalist C.B. Dollaway was the 33-year-old father of four’s fifth victory in six appearances and puts the 2001 NCAA wrestling champion in position to make some noise in the 185-pound division. Belcher, a borderline Top 10 contender who continues to recover from a career-threatening eye injury, will need a suitable dance partner once he returns to the cage. The 26-year-old Duke Roufus protégé has not fought in 10 months, and Munoz’s combination of stout wrestling and heavy hands figures to pose a difficult challenge for him. 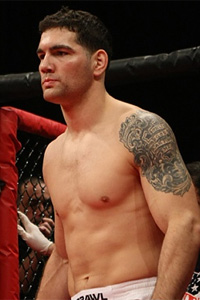 Chris Weidman file photo
Weidman passed his first UFC test.
Chris Weidman vs. Kendall Grove: Weidman passed his first UFC test with flying colors, as he defeated American Top Team veteran Alessio Sakara by unanimous decision at UFC Live 3. Viewed by many as the top middleweight prospect in the sport, he showed off both the skills that make him a prized commodity and the inexperience that leaves plenty of room for growth. Grove has preyed on talented newcomers in the past -- witness his brabo choke submission of Belcher at UFC 69 and triangle choke submission against Jake Rosholt at UFC 106 -- and his long arms and height present many stylistic issues at 185 pounds, especially for someone as green as Weidman.

Brian Bowles vs. Scott Jorgensen: Bowles showed no ill effects from a year-long layoff, as he walked through Damacio Page’s heavy artillery and submitted the Jackson’s Mixed Martial Arts standout in the first round at UFC Live 3. A sound wrestler with powerful hands who has taken to the submission game like a natural, Bowles remains one of the elite figures at 135 pounds.

A fight with Jorgensen, who will first need to oust Ken Stone at “The Ultimate Fighter 13” in June, promises non-stop action and potential fireworks on the feet. Jorgensen fell short in his bid against champion Dominick Cruz, who happens to be the only blemish on the Bowles resume. The Jorgensen-Bowles winner could then face former bantamweight king Miguel Torres -- provided he gets past Brad Pickett at UFC 130 -- in a 135-pound title eliminator in late 2011 or early 2012.