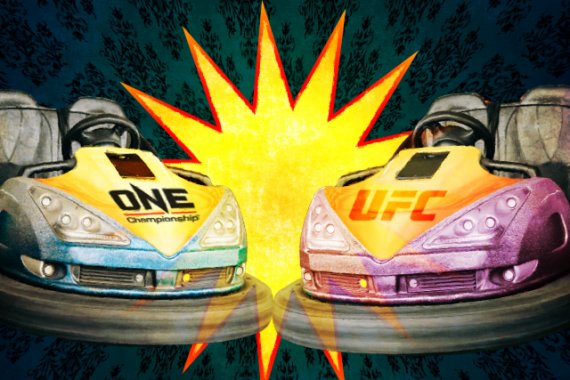 Deadspin made some waves in the MMA community two weeks ago with a headline that offhandedly referred to One Championship as a “minor league.” Never mind that the article itself was pretty much wall-to-wall snark -- the swipe at Sage Northcutt’s new promotional home was merely the first of about a half-dozen punchlines -- the headline is what got a rise out of people. Whether because they’re unfamiliar with Deadspin’s work or simply felt honor-bound to defend the world’s most unintentionally hilarious MMA promotion, I saw dozens if not hundreds of Twitter responses angrily asserting that One is not a minor league.

They were correct, of course; One Championship is not a minor league. Minor leagues usually play by the same rules as the majors.

Sure enough, the white-hot rage of the defenders of Asia’s premier mixed martial arts organization barely had time to cool before One pulled a move that’s more bush league than minor league. At the same event, One “Enter the Dragon,” where Northcutt came to major-league grief in his promotional debut, Giorgio Petrosyan had been upset by Petchmorakot Petchyindee Academy in a One Super Series kickboxing bout via split decision. One Championship CEO Chatri Sityodtong this week announced that the promotion had overturned the outcome to a no-contest.

If you watched that fight, you may have an opinion on whether Petrosyan should have won or whether there is any substance to One Championship’s stated rationale for overturning the decision. I’m here to tell you it’s irrelevant. Your opinion on the fight doesn’t matter, nor does mine. The real issue is that the promotion once again exercised unilateral power to change fight results when it suited it. I say “once again,” because One did the same at least twice in 2018. In March, the organization reversed a submission win to a loss by disqualification, stating that the slam that had Robin Catalan tapping out in pain had in fact been an illegal suplex. Worse yet, in July, One overturned a unanimous decision, using language that said in so many words, "We don't care what the judges thought. We say the other guy won."

For the same reason any non-bush league government has a system of checks and balances between its executive, legislative and judicial branches, a non-bush league MMA organization requires separation between promotion and regulation. To do otherwise strikes at the very heart of integrity in competition. Am I being overly dramatic? You may love it or hate it when UFC President Dana White rails at officiating or judging at a post-Ultimate Fighting Championship press conference, but imagine for a moment that he had the power to change the fight results about which he was complaining. How many times would it have to happen before you were screaming about the transparent conflict of interest? Then understand that Petrosyan fights out of and is listed as an instructor at Evolve MMA, a gym that was founded by Sityodtong and is heavily co-promoted with One Championship.

Of course, that is only the most obvious and egregious of One Championship’s questionable practices. I am continually surprised at how many people seem to believe that One has “solved the problem of weight cutting in MMA.” The people spouting this claim range from random marks on social media and in forums all the way to veteran observers like Joe Rogan who should know better. Here’s the problem. On paper, One Championship’s weight policy, which includes such sensible measures as hydration requirements and periodic weight checks outside of competition, sounds amazing. In practice, however, One’s weigh-ins are neither open to the public nor supervised by an independent regulatory body, which renders all those noble ideas meaningless. If a One Championship fighter misses weight in a forest and nobody sees it, does he forfeit 20 percent of his purse?

The problems this practice generates are many. Take Sherdog’s divisional rankings, for example. Is it fair to compare the performance of UFC and Bellator MMA welterweights who must weigh in at 170 or 171 pounds to those of One Championship “welterweights” who can admittedly weigh as much as 185 and, more disturbingly, whose weight we don’t actually know?

The same goes for drug testing in One. While the organization maintains a strict anti-PED policy and Sityodtong proudly proclaims that there have been no scandals in his organization in seven and a half years, when there is no independent testing reported to the public, it’s hard to imagine how a scandal would occur, short of a fighter walking into the cage with an actual needle dangling from his gluteus.

All of this shadiness and lack of transparency would be just another example of MMA promotional weirdness except for the fact that One never passes up a chance to trumpet its culture of honor, respect and clean competition. From veteran play-by-play man Michael Schiavello to Sityodtong himself, One Championship’s public representatives are at pains to let us know that they exemplify a traditional martial arts spirit that is lacking in their Western rivals.

Depending on your own views, the contrast between One’s preaching and practice is likely to elicit snickers, eye-rolling or simple indifference. That’s a shame, because there are many things the Singapore-based giant does well. The crossover of multiple fight disciplines on the same card is something I wish more North American organizations would do. The entertainment value of the in-cage product is generally excellent. While I probably am not coming off as very complimentary of One in this article, I have been an avid consumer of its events; and it bears repeating that One’s weight policy is intelligent and represents a potential revolution in the sport, even if the promotion has thus far not shown itself willing to lead by example and put its main events where its mouth is.

Of course, there is another reason the quip that One Championship is a minor league is problematic -- it implies that Northcutt’s former employer, the UFC, is a major league. However, the world’s No. 1 MMA promotion has spent the last week or two embroiled in its own bush-league pursuits, reminding all of us that while some kids are bigger than others, the sport is still a kids’ table.

The UFC cut several fighters this week, but it was the release of former flyweight title challenger Wilson Reis and middleweight Elias Theodorou that elicited the greatest response from fans. Especially Theodorou; Reis’ ouster was perhaps more understandable in light of his being on a 1-4 run with three stoppage losses, even if they were to top-level opponents. Factor in that the UFC men’s flyweight division is now down to 10 people and Reis himself predicted this over a month ago, and it seems to be a comment on the division as much as on the man.

Theodorou’s release, however, made a major splash and was instantly divisive. Two camps appeared: one protesting the dismissal of a fighter with an 8-3 UFC record on the back of a single loss and one celebrating, or at least accepting as appropriate, the release of a fighter whose fights were often excruciatingly dull affairs.

For the most part, I fall into the former camp. Theodorou’s firing seems to be a referendum on what fans want out of MMA: sport or spectacle? I enjoy both aspects, but the spectacle is contingent on the sporting aspect, the idea that I’m watching a legitimate competition whose end goal is to figure out who is the best fighter. Without that, I’m just watching bodies crash into each other hoping to see something crazy happen, and if that’s all I’m doing, why not simply go to WorldStarHipHop, where 99 percent of the fights end in a finish?

Of course, the UFC doesn’t always need the pretext of entertainment value to make bush-league moves. Look no further than where we started this article: “Super Sage,” who was given his walking papers despite a 6-2 promotional record, an active three-fight winning streak, a memorably oddball personality and a résumé of mostly fun fights.

Thus, we come full circle. Nothing means anything, this whole sport is a clown car full of sad clowns -- even if I love it -- and we’ll probably never have nice things. See you next week, freaks.