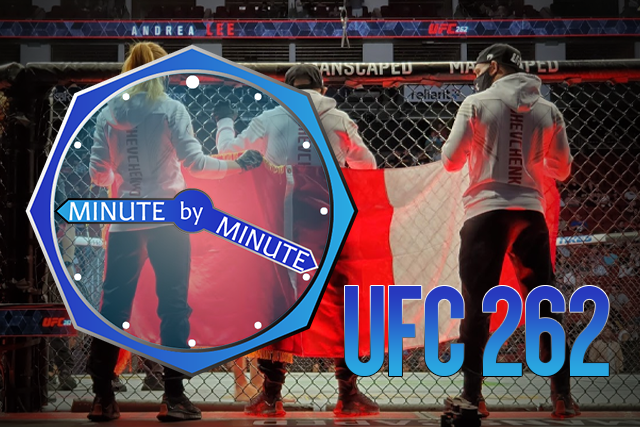 5:00 p.m.: Welcome to Houston! The Ultimate Fighting Championship is back in the Bayou City with UFC 262, and your friendly correspondent is covering it in person. As I’ve done before, I figured a collection of observations from Press Row would make for a fun “Minute by Minute.”

5:15 p.m.: Obviously, the biggest storyline here other than the fights themselves is that this is the second outing in the UFC’s return to full live crowds. The promotion boasted about how quickly the event sold out, and I see no reason to doubt it. Notably, the first fight probably won’t start for 30 minutes, and there are already a lot of people in the stands.

At the Toyota Center for #UFC262 and there might be 2000 people in seats already. I've been to events where there fewer people present for the third prelim. People are definitely eager for the return of live combat sports. pic.twitter.com/p1iMm3tkUp

5:31 p.m.: First fight out of the tunnel is Christos Giagos vs. Sean Soriano. I have Giagos in this one, and I have him decisively, but Soriano is walking out to “Ready or Not” by the Fugees. That’s a 10-8 right there.

5:41 p.m.: Let the record reflect that even as starved for live fights as this town and crowd clearly are, it took exactly 13 seconds for the first “WOOO” to sound in Toyota Center.

5:48 p.m.: Oh man, Soriano is out. Giagos puts him all the way to sleep with a nasty brabo choke. I feel for Soriano, who fought his way back to the UFC five years after going 0-3 in his first run. He’s the definition of a fun, flawed fighter who might never be a contender, but could easily have a .500 record in the UFC if matched differently. He was piecing Giagos up on the feet comfortably, but same as in 2015, had no answer for a physically stronger, better grappler once it hit the canvas.

6:15 p.m.: Kevin Aguilar goes by “The Angel of Death.” I’m normally not a big fan of fighters copping a nickname made famous by another fighter, but Aguilar gets a pass, as he shares a few traits with the original, Damacio Page: undersized and violent. Let us take a moment to remember.

6:42 p.m.: Next up is Gina Mazany vs. Priscila Cachoeira. At 1-3 in the UFC with the lone win coming against a sub-.500 fighter, Cachoeira may well be fighting for her job. Mazany is on firmer ground, but not by much. She’s under the gun to prove that she really has a new lease on life at flyweight, and her successful debut wasn’t just Rachael Ostovich being a free space at the UFC level. This might not be a huge fight in the grand scheme of things, but the pressure has to be crushing for the women involved.

6:54 p.m.: Yeah, I’d call that crushing. The only way this fight was going to end was with one fighter sobbing in a heap and the other screaming to the rafters. Cachoeira lives on to fight another day in the Octagon. So does Mazany, probably, but no question, that was a setback.

7:30 p.m.: In slightly cheerier women’s flyweight news, Andrea Lee just picked up the most impressive win of her career, tapping out Antonina Shevchenko with a second-round triangle armbar. What a sharp performance. She made things scrappy and ugly against one of the most technical strikers in the UFC, and flexed her considerable advantages in brute strength. There’s something of Holly Holm to “KGB” beyond the obvious blond-country-girl thing. Both of them present as strikers, but have a natural knack for wrestling that stems from plus athleticism, and they are more than happy to lean on it if it’s the best path to victory. 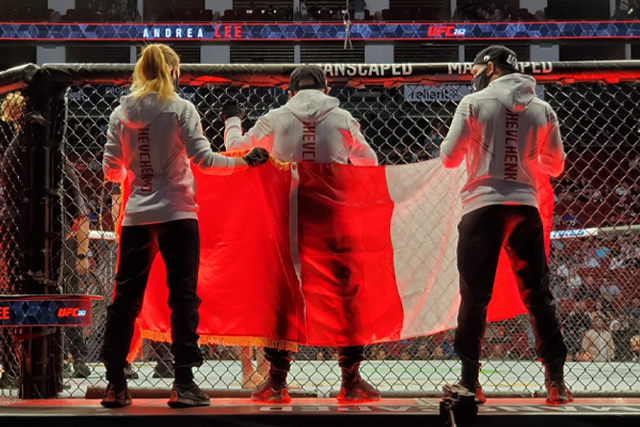 7:42 p.m.: OK, it’s time for me to confess that I’ve been underestimating Jordan Wright. He’s a perfect storm of things that bug me: dorky nickname, Dana White's Contender Series knockout loss overturned due to his opponent popping for weed — can we please just get cannabis off the banned substances list? — and picked up a win at the expense of a guy I like, Isaac Villanueva. (Hey, I never said I was rational.) But I legitimately did think Jamie Pickett was going to handle him easily, and Wright ran through him in about 60 seconds.

7:58 p.m.: Mike Grundy walks out to Oasis’ “Wonderwall.” I normally enjoy fighters repping their hometown in their walkout tracks, but there are so many better choices from Manchester that it boggles the mind. However, the Houston crowd is eating it up, singing along with every word, so I’m clearly outvoted.

8:23 p.m.: Lando Vannata defeats Grundy by split decision. That isn’t the end of the world, but the scorecards included a 30-27 each way. That’s a problem. Opinions can differ on who took a particular round, but 30-27 | 27-30 implies a fundamental disagreement about what constitutes winning an MMA fight. If you don’t remember, UFC 247 here in Houston last February was fraught with judging controversies. It just feels as if we’re cruising toward something similar here. Please, no.

8:40 p.m.: Oh. My. God. Andre Muniz just became the first man to submit Ronaldo Souza in MMA. Specifically, he broke the jiu-jitsu legend’s arm with an armbar that Twitter is telling me yielded an audible snap on TV. I guess I’m grateful for the loud packed arena.

8:52 p.m.: OK, you can stop replaying the arm break on every single screen in the arena anytime you like now, guys. Please.

9:32 p.m.: Edson Barboza just scored one of the weirder-looking, but more impressive knockouts of his career. All the momentum was going the way of Shane Burgos, when Barboza clipped him with a single punch to the temple that made Burgos drop about two seconds later, like a tranquilizer dart. For a guy in Barboza who had question marks hanging over his chin and cardio at 145, and has always been a bit of a front-runner anyway, this was a statement.

9:50 p.m.: I've said a few times that I actually enjoy empty-arena MMA. We've gotten to hear so many little moments over the last year that we would have missed at any other time. Charles Rosa trying to goad Bryce Mitchell into letting him up and slug it out. Glover Teixeira apologizing to Anthony Smith for beating five years off his life. Hell, Kevin Holland was one of the biggest breakout stars of 2020, and it was due half to his fantastic wins and half to being able to hear everything he said in the cage. However, I'm realizing that I prefer empty-arena MMA on television. Live and in person, there's no substitute for an energetic crowd, whether it's 1600 people or 16,000. I missed this.

10:46 p.m.: OK, now we get to find out where Tony Ferguson really is at this point competitively. Yes, he’s taken two straight one-sided losses, but they were against Justin Gaethje, who was a Top 3 lightweight at the time and is still in the Top 5 now; and Charles Oliveira, who may be your lightweight champion in about 40 minutes. Beneil Dariush is finally a solid Top 10 contender on a great win streak, but he’s a level below those two, at least for now. If Ferguson beats Dariush, he’s still a super-elite fighter who simply hit a ceiling. If he loses to Dariush, it’s more like he’s hit a wall, and it’s time to call code on “El Cucuy” as a title contender.

11:15 p.m.: Code. Dariush dominated with wrestling and jiu-jitsu, and while the audience booed lustily throughout, Dariush was very aggressive on the ground, and in fact had Ferguson in a heel hook in the second round that would probably have finished 95% of fighters in the sport. Ferguson’s decline in the last year and change has been stunning. Everything that made him the scariest man in the sport — aggression, the cardio and chin to be able to maintain his murderous pace — is going, and all that’s left is his preternatural toughness. Basically, he’s turned into a 37-year-old man with a history of injuries, which is of course what he is. Count me among those bummed out at the decline of one of the most exciting fighters we’ve ever seen.

11:18 p.m.: This arena is booing the living crap out of Dariush, all but drowning out his post-fight interview. From what I can hear, said interview is a pretty wide-ranging affair, touching on such disparate subjects as parenthood, Elon Musk and…Marxism? Eh, maybe it’s better I can’t hear. At any rate, that the crowd is booing as nice a guy as Dariush is indication of how revered Ferguson has become. It’s kind of unexpected.

11:21 p.m.: Just about time for one of the most unlikely-sounding title matchups that still makes pretty good sense. Five years ago, if someone had told you that in May 2021, Charles Oliveira and Michael Chandler would be fighting for the UFC lightweight title, you would have looked at them like they were insane. Oliveira was already one of the sport’s all-time submission aces, but with his history of weight misses and bizarre in-cage lapses, he seemed like a very long shot to ever string together enough wins to challenge for the toughest title in the sport. Meanwhile Chandler was Bellator’s greatest homegrown star and most accomplished fighter, yet he was just barely bouncing back from a three-fight losing streak that had almost certainly damaged his value on the free agent market. All indicators seemed to point to “Iron Mike” spending the remainder of his career with the UFC’s top competitor. What a difference five years make.

11:41 p.m.: Well, that was a wild fight and a great finish! The victorious Oliveira vaults the fence and delivers an impassioned address to the UFC broadcast table, then returns to the Octagon to finish celebrating. 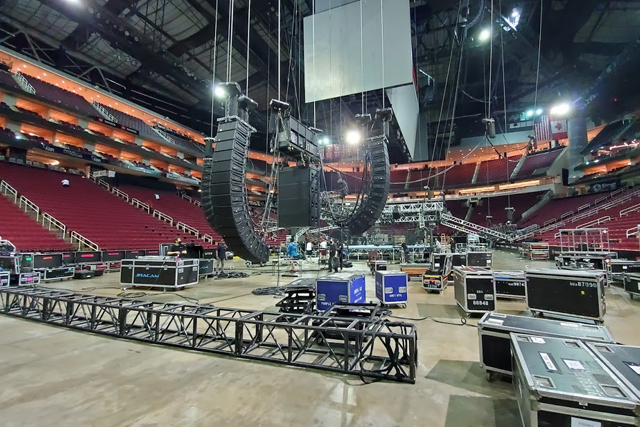 12:46 p.m.: You know, Chandler would certainly disagree, but the outcome of this title fight was about as much of a win-win as you could come up with. The fact that Chandler nearly finished Oliveira in the first round is key. Oliveira surmounted adversity to win the belt, putting the notion of “do Bronx” as a headcase even further in the rear view, while Chandler, by coming within a ground punch or two of finishing the fight, showed that he absolutely belongs in the title picture, despite what Bellator detractors might have believed over the years. Anyway, goodnight from Houston.