El Grande, Ore. -- Taking possession of the belt vacated by Chris Leben upon his departure for the UFC, Icon Sport veteran and undefeated contender Mario Miranda captured the middleweight title at Sportfight 25 “Wildcard” on Friday at the Spirit Mountain Casino.

Miranda (6-0) submitted Tyson Jeffries by armbar at 1:19 of the third round, disappointing a partisan crowd. In the first round, both fighters looked to establish themselves deliberately. After a brief clinch, Miranda delivered an accidental knee to Jeffries’ groin. After recovering, Jeffries secured double under hooks, took Miranda for a ride and planted him in the center of the canvas before delivering some solid ground-and-pound.

“The only time I was worried was when he took me down at the very beginning of the fight,” Miranda said. “He was throwing some hard shots. I’m lucky none of them caught me.”

The tide turned in the second round, however, as the Brazilian got the better of the exchanges despite accidentally kneeing Jeffries in the groin for a second time. After Jeffries recovered, he came out of his corner with a spring in his step, urged on by the crowd. He delivered a sweeping leg kick that knocked Miranda off his feet, but it was not a sign of things to come.

Miranda controlled the last two minutes of the round from the clinch, landing powerful knees and elbows to the head and torso of a game but tired Jeffries.

“I felt like I had good momentum, and I was throwing hard shots, but he’s a tough kid,” Miranda said.

The third round was all Miranda, as he took Jeffries’ back after slipping a haymaker and sunk his hooks after scoring a takedown. As Jeffries (2-2) attempted to twist and escape, Miranda stepped over his arm while still standing and began to torque the elbow joint, forcing Jeffries to verbally tap to avoid serious damage.

The evening’s co-main event won “Fight of the Night” honors, as Sportfight’s top heavyweight contender, DJ Linderman, submitted Kyle Keeney with a rear-naked choke at 3:29 of round two. 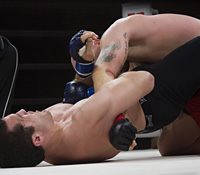 Thomas Martinez/Sherdog.com
Casey Manrique painfully
submitted Daryl Cutler.
After a long clinch to start, Keeney landed a big elbow, firing up both competitors. Linderman returned the favor with a Superman punch, and both fighters landed shots until Keeney shot for a double-leg and drove Linderman hard against the ropes. As the action stalled, the crowed booed, even as Keeney improved his position and got Linderman’s back, sinking in one hook as the bell sounded.

In round two, the action picked back up. Linderman (3-0) attempted a spinning back kick, but Keeney countered by taking his back with a standing waist lock. After several attempted suplexes, Keeney finally wrestled Linderman to the ground and tried to dig in his hooks. He was riding too high, however, and Linderman shook him off.

“I’ve been training [with somebody] on my back,” Linderman said. “I had wrist control. He didn’t sink his hooks in, so he had no control.”

From there, the number one contender landed heavy ground-and-pound from Keeney’s guard, bloodying his opponent and passing to the mount. Keeney then exposed his back to avoid further punishment, and Linderman capitalized for the win.

“Once I got that over-under on him, it was over,” he said. “I pinned his back and started throwing shots. He didn’t want to get pounded, so he stretched his neck, and I went for the kill.”

Keeney (3-3) stepped in as a late replacement and filled in for Sportfight heavyweight champion Josh Queen. According to Linderman, Queen was knocked out recently and suspended by the state athletic commission, rendering him unable to defend his title.

In a middleweight bout, Casey Manrique submitted Daryl Cutler at 1:20 of round one in both fighters’ pro debuts. After a short feeling out process, Manrique (1-0) threw a hard leg kick, but it was caught by Cutler (0-1), who then swept Manrique’s good leg, landing him in the guard. After a small amount of ground-and-pound, Manrique took control from the bottom, contorting Cutler’s elbow at a grotesque angle with an unorthodox straight armbar that finished the fight.

“I never plan anything. I never learned that move in my life,” Manrique said. “That, to me, is why I fight.”

At welterweight, Northwest Training Center’s Darrell Fenner defeated Chris Ensley by technical knockout at 2:19 of round one. Fenner (2-1) landed a huge right uppercut before executing a heavy-duty hip throw, casting Ensley (1-2) against the ropes. Fenner jumped on top, landing shots to the delight of the crowd until the referee stopped the contest.

Fighting at a catch weight of 165 pounds, Lloyd Woodward submitted Carmen Cassella by rear-naked choke in the first round. Working from the muay Thai plum, Woodward (1-0) hurt Cassella (0-3) and forced him to shoot for a takedown. Woodward sprawled and ended up on top, stepping over into the mount and delivering heavy ground-and-pound until Cassella exposed his back.

Also fighting at a catch weight of 165 pounds, Strikeforce veteran Chris Yee (4-1) submitted Team Quest’s Nathan Wallner (2-3) via rear-naked choke at 1:46 of the first round. Finally, in a back-and-forth heavyweight contest, Strikeforce alum Josh Bennett (8-7) stopped Ryan Pope (6-7) by ground-and-pound at 2:51 of the first round.