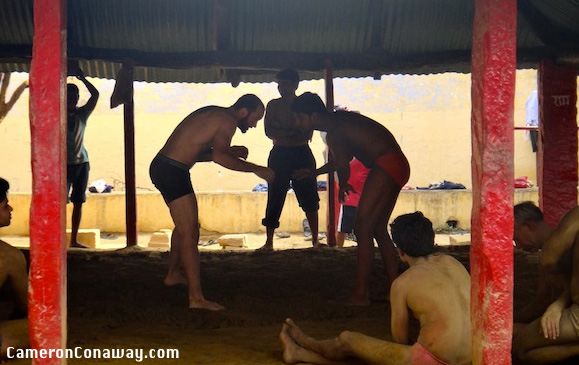 
VARANASI, India -- Corpses are covered in butter, laid atop wooden planks, layered with ornate cloth, briefly dipped in the Ganges River and then carried to an open-air pit where they are burned for all to see.

This is Varanasi, the oldest and most spiritual city in India, a holy place whose contrasts will dance before your eyes the same as the flame. Here, you can have the country’s tastiest lassi, though to sample it, you may have to step in a heaping pile of warm cow dung while dodging a snake charmer’s cobra. You feel the world’s space from the rooftops here but can barely fit in its alleyways. Ancient traditions thrive alongside cybercafés, traditions such as the art of Pehlwani wrestling.

Pehlwani wrestling traces its roots back to the late 16th century, during the 300-year-reign of the Mughal Empire. These days, most people come to know of the Mughal Empire as it relates to the massive collaboration it took to build the Taj Mahal. However, the confluence of cultures -- from Uzbekistan to basically the whole of today’s Iran, India, Pakistan and Bangladesh -- sparked the evolution of everything from mathematics and science to fighting and the fine arts.

Pehlwani was one such result, and in many ways, it became the perfect example of such melding. It took malla-yuddha, the combat wrestling style of the Indian subcontinent that itself took thousands of years to develop, and combined it with the Persian version of combat wrestling called Varzesh-e Bastani, which, though equally brutal and geared for war, first put emphasis on the mindfulness of Sufism and the corresponding development of a peace-oriented mind before a combat-oriented body. Let it be known that the combat wrestling of which we speak in this place does not revolve around pinning; it involves incapacitating your opponent in the fastest way possible, be it from knockout or submission.

The akhada or traditional wrestling ground, the Akhada Goswami Tulsidas of Tulsi Ghat, was unlike anything I had ever seen. It was as if a child’s sandlot had been transformed into a combat training center. As I approached the grounds, I saw deep imprints in the sand that looked like large rocks had recently been removed. Then my eyes moved up to see the wrestlers swinging the imprint-makers, primitive yet effective training tools training tools such as the Indian clubs and the weighted ring. They did not grunt as they struggled under the heavy weights, and the result was an engrossing, peaceful silence of grit and gritting.

As the wrestlers were swinging and squatting -- many records credit these wrestling styles with the invention of pushups and squats -- it became clear that many of them had their specialty. One could swirl the awkward 40-pound clubs as though they were Fourth of July sparklers. Another could wear the weighted tire as if it were a necklace; he even wore it while he showered.

Then it was time. After what seemed like an eternity of observing, they motioned for me to strip down to my underwear. The incredible tour guide who brought me here had already told them I was an American fighter, and so they were excited, as was I, to throw down a bit.

The first process was to sit cross-legged in front of the guru, an elderly man revered by all there as the Pehlwani master, and ask for his permission. I bowed to him, smiled and said “Namaste” as respectfully as I could. He reached a hand to my shoulder and then to my wrist, and then he smiled. I was cleared.

At this point, four wrestlers asked me to sit in the middle of the ring so that they could massage the soil all over my body. It was soft as silk, and I later learned the particular soil in which they train and fight is a special ayurvedic blend of dirt, mustard oil, yogurt and turmeric. They believe it promotes healing, cures some illnesses, reduces injury and can even encourage fertility in women. After a thorough 10-minute massage, they asked me to stand. The other wrestlers circled, but one came forward in go mode. I glanced around and received only smiles. I looked at him, and it was on.

Those of us who have competed in mixed martial arts have experienced a thousand tie-ups, but how many of them do we remember? This one was unforgettable. Never had I tied-up with a sturdier human being. Their training methods -- which keep core, grip and neck strength as top priorities -- along with their technique and experience had created a wrestler who was almost impossible to move. He did not flinch at feints; he was not nervous to compete with a foreigner; and he was not thinking about what to do. He knew, and his body knew. Millions of repetitions were part of his DNA. I escaped his single-leg, stuffed his double with a hard sprawl and in the split-second where we both reached an upright position, he hit me with a gorgeous Ippon Seoinage.

The soil was soft, but the sheer impact, coupled with the unexpectedness, took my breath away. The other wrestlers smiled -- likely amused at my ability to deny him twice and take a fall, rather than this man’s ability to launch me through the air -- and from that point forward, we knew where the other stood. Another wrestler came in, we went at it and then another followed. The atmosphere was intense but friendly, and the guru sat in the corner enjoying every moment of the action.

We were total strangers offering each other complete trust. Through our here and now, we were paying homage to days long gone through sharing the parts of the past we carried within us. We spoke only in the language of gogoplatas and whizzers and hip throws and history. When we watch MMA, we should think not only of the athletes in front of us, of UFC 1, of the Gracies or of Greek pankration but of how the warfare art of vicious hand-to-hand combat came into existence: through total strangers trusting and sharing. In the long history of martial arts, the battles have been and always will be predated by peace.

For millions around the world, Varanasi is the greatest place to die, but let this not cloud how good a place it is to see life and dying arts thrive.

Cameron Conaway is a former MMA fighter and the award-winning author of Caged. His latest book is Bonemeal. Follow him on Twitter @CameronConaway.