When the Ultimate Fighting Championship announced late last year that it was absorbing the WEC and its two additional weight classes, it took on a few challenges in the process.

First, it had the task of creating viable attractions out of small fighters -- never an easy undertaking. Second, it had to make initial matchups in the 135- and 145-pound divisions and showcase those matchups as test cases to justify the expansion of existing weight classes from five to seven.

Thus far, it has gone very well. Dominick Cruz’s decision win over Urijah Faber at UFC 132 on Saturday at the MGM Grand Garden Arena in Las Vegas did tremendous good for the division’s immediate viability. While a boring fight could have relegated bantamweight bouts to bottom-of-the-card status in the near future, the 135-pounders received top billing at the event, and the Cruz-Faber rematch made for an excellent showcase.

The fight also had the effect of allowing Cruz to defend his belt while establishing Faber as a likely future challenger. In a match that was competitive and intensely contested, Faber could have readily taken the title from Cruz’s capable hands with a couple swings of momentum. That was a positive development because the UFC’s 135-pound roster is already thin and will take a significant hit when the 125-pound division arrives, poaching two top bantamweights: Joseph Benavidez and Demetrious Johnson.

Branding and marketing appeal do not happen overnight, and building these around a fighter is a long-term process that occurs over multiple appearances. A fighter’s body of work gives the public a fair expectation of what to expect from him and therefore heavily influences where he will be placed on a card. With Cruz’s style in recent bouts trending toward one-sided decisions in which opponents barely lay a hand on him, the Faber challenge showed a far more exciting side to “The Dominator,” as he was pushed down the stretch and ultimately responded with a strong finishing round.

The guess here is that Cruz-Faber 3 happens but with a defense for Cruz in between, likely against Brian Bowles, who decisioned Takeya Mizugaki on the UFC 132 undercard. Cruz’s timing and technical acumen are top-notch, and he was as exciting as he has looked in a long time, mainly because Faber was the only guy with the goods to present the threat of danger. 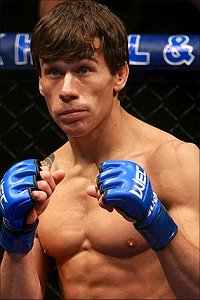 Brian Bowles File Photo
According to Probst, Bowles should
get the next crack at the champion.
The UFC will need time to revamp and build up to Cruz-Faber 3, and here is my prescription for it: have Cruz grant Bowles a rematch, which gives Bowles, 2-0 since he lost his title to the champion, a chance at revenge. There’s your storyline right there. It’s also the kind of match that could underscore why Cruz is so difficult to fight, thereby creating demand for Faber again.

Meanwhile, pit Faber against fellow former WEC star Miguel Torres. That is an exciting fight, especially since Torres could be forced to do battle with Faber on the ground, and his submission game and tenacity would make it a must-watch event. It also serves as the kind of style matchup in which the winner is going to be exciting, thereby developing a natural challenger for Cruz. It is also the kind of style matchup I think Faber wins nine times out of 10, but, hey, you could have said that about Tito Ortiz-Ryan Bader, right? That’s why they fight.

In six months, rematch the winners of Cruz-Bowles and Faber-Torres. No matter how the permutations shake it, it’s champion against a former champion.

If you get Cruz-Faber 3, you can also make Bowles-Torres 2 -- a rematch of their first fight, which saw Bowles knock out Torres and take his crown.

In the process, the UFC will have time to bring along the younger bantamweights and get them some key exposure, building their profiles in the process. Renan “Barao” do Nascimento Mota Pegado (26-1, 1 NC) is wildly talented and 3-0 in the WEC and UFC. Brad Pickett and Michael MacDonald are exciting and aggressive. There are also mid-level contenders like Scott Jorgenson and Eddie Wineland, who faces Benavidez on Aug. 14. The bantamweight division remains somewhat top-heavy, with two new UFC stars in Cruz and Faber. A significant drop off exists after them in terms of name recognition and marketability, but given some time to stir the pot and let the goods simmer, it will fill out and develop a deep roster of talent. None of these cogitations include future signees and hot prospects not currently with the organization.

What the bantamweight division sorely needed was a jumpstart, and interesting future matchups people would want to see. Cruz-Faber surely supplied these. Moving forward with proper care and handling, the UFC bantamweights could earn some long-deserved limelight for the little guys.