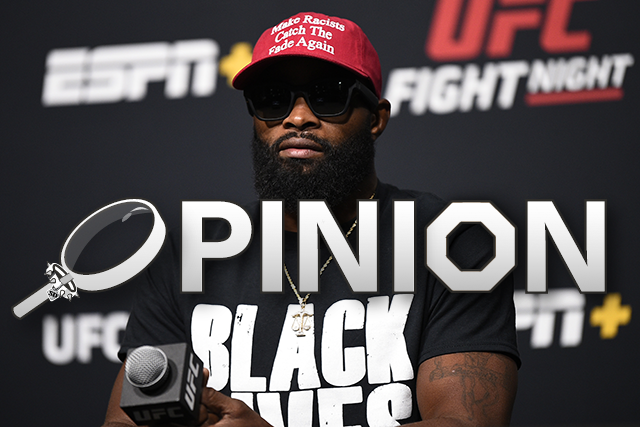 Say what you will about Tyron Woodley, but for a good minute “The Chosen One” looked like he might just be good enough to eventually supplant Georges St. Pierre as the greatest welterweight in MMA history.

Back in 2018, when he was coming off his fourth consecutive title defense over the then-undefeated Darren Till, Woodley looked near-invincible at 170 pounds. He had knocked out Robbie Lawler in under half a round to capture the title back at UFC 201, and after two perilously close fights with Stephen Thompson—the first of them was ruled a draw—he had cut through Brazilian grappler Demian Maia and the much-typed Till like a muscular knife through butter. Woodley was powerful, dynamic and all kinds of motivated to keep that strap, leveraging his championship status into opportunities in music and film and generally conditioning us to the idea that he was going to be there indefinitely.

At the time, it seemed like Woodley’s biggest adversary wasn’t anyone in the Top 5 of his division. That distinction seemed to belong to UFC President Dana White, who made a sport out of criticizing Woodley and threatening to strip him of the title. White variously labelled Woodley a “drama queen” (when Woodley spoke up on racism in MMA), “boring” (after back-to-back conservative performances against Thompson and Maia) and “full of s---” (when Woodley alluded to defending his title opposite Nate Diaz, which, as it turned out, the promotion was actively looking to set up).

In light of Woodley’s dominance and the intensifying hostility directed towards him from the promotional brass, it felt almost discombobulating when Kamaru Usman usurped him for the title and put him back into the contender queue. All roads seemed to be leading to a John-McClane-Hans-Gruber-style standoff between Woodley and White, and when “The Nigerian Nightmare” outwrestled, outstruck and outmuscled the champ over a full 25 minute at UFC 235, it felt the tiniest bit anticlimactic.

That was especially so in light of the fact that Usman was essentially a stand-in challenger for Colby Covington, who had captured the interim 170-pound title 10 pay-per-views prior and had used his distinctive brand of lowest-common-denominator self-promotion to disparage Woodley and sow fan interest in a unification bout. Though Covington was ultimately stripped of his hardware barely three months after he captured it, the war of words between he and Woodley, each of whom fought under the American Top Team banner, continued to escalate. With their feud playing out across a backdrop of an intensifying culture war in America—with Covington acting as MAGA-spouting avatar for Trumpian politics against Woodley’s less-vocal liberal advocacy in respect to racial equality and gun control—a blockbuster grudge match seemed inevitable.

However, it was not to be. Usman beat Woodley, with the former champion’s plea for an immediate rematch gaining little traction given the one-sided nature of his loss and his rocky relationship with the UFC. Usman got to be the one to chin-check Covington, knocking out “Chaos” in the fifth round in an instant classic at UFC 245 before defending his title a second time at UFC 252 against Jorge Masvidal in a massive pay-per-view spectacle that doubled as the UFC’s first pay-per-view main event on Fight Island.

Meanwhile, Woodley’s efforts to get back in the winner’s circle were repeatedly derailed. A scheduled rematch against Lawler fell through after Woodley injured his hand, and it was followed by the cancellation of his highly anticipated scrap with Leon Edwards due to border restrictions associated with the COVID-19 crisis. By the time Woodley got his opportunity to make the case for a second title run, this time against the surging Gilbert Burns at an empty arena, he had been in an extended training camp punctuated by false starts and the alleged murder of George Floyd in May, which he admitted weighed heavily on him both before and during the bout. Long story short, Burns had his way with the former champion over the full five rounds, with Woodley frequently backing up or putting his back to the cage, while offering little in the way of meaningful offense. He looked lackadaisical, gun-shy and very much like his best days were behind him.

Which brings us UFC Fight Night 178, where Woodley will march into the cage as a significant underdog opposite the No. 2-ranked Covington in their long-awaited main event grudge match on Saturday at the UFC Apex in Las Vegas. Whereas many would have forgiven Woodley if he opted for a less stylistically dangerous matchup as part of a slower and more cautious route back into contention, at 38 years old and recently going all-in on using his platform to advocate for the Black Lives Matter movement, Woodley is going big-game hunting in an effort to resuscitate one last championship run. He will face a durable volume puncher whose modus operandi is pressure, making it absolutely vital that Woodley throw his hands and initiate offense, lest he spend another 25 minutes like those against Usman and Burns.

If he can beat Covington—who, in typically gormless fashion, characterized the bout with Woodley as “capitalism versus communism, MAGA versus maggot”—he will have settled their long-running feud, defied the oddsmakers and chalked one up for the BLM organization, which Covington has repeatedly lambasted. He will be right back at the top of the division, with the scalp of a top contender on his resume and a case for either the winner of Usman-Burns or a title eliminator against Edwards.

If he loses, let alone loses badly, then Woodley’s time at the top is probably over, and the sport will be worse for it.

Jacob Debets is a lawyer and writer from Melbourne, Australia. He is currently writing a book analyzing the economics and politics of the MMA industry. You can view more of his writing at jacobdebets.com.
« Previous Prime Picks: UFC Fight Night 178 ‘Covington vs. Woodley’ Next Coach Speak: Covington’s Trainers Break Down How They Believe He’ll Finish Woodley »