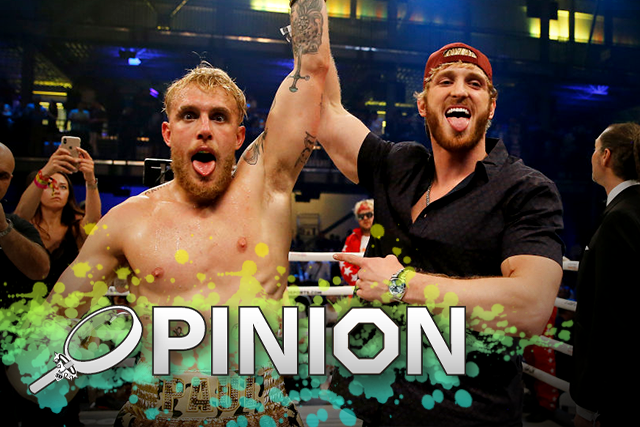 
Sometimes good can come from the unlikeliest sources. Sometimes truth and wisdom can be uttered by the strangest individuals. Consider the following quote:

“In my third fight I made more in total pay than any fighter in UFC history. Maybe it’s time to pay your fighters their fair share? No wonder they all want to get into boxing. Dana you say you make the fights fans want to see…so hurry up and make Jones vs Ngannou. Pay them their fair share [. . .] $10 million purse for each guy, plus pay-per-view. Why are UFC fighters so underpaid vs. Boxers? Why did I make more in my third fight than all but two (Khabib & Conor) UFC fighters have in history? I know why…”

This great call-out of Ultimate Fighting Championship President Dana White, accurately dissecting the laughably small paydays for which UFC fighters trade the health of their minds and bodies, whether they're rank-and-file martial artists or world champions, was uttered by one Jake Paul. And despite how much one may laugh at Paul's boxing career or the friendly, bloodless sparring session between his older brother Logan and Floyd Mayweather, these spectacles may have a very positive effect on UFC fighter pay and, by extension, MMA as a whole.

Let's step back for a second. UFC fighters make just 20% of the company's total revenue. Not only is that drastically lower than the roughly 50% revenue share that NFL and NBA players receive, but the UFC does far less for its athletes. Where pro basketball and football have huge marketing machines that promote the hell out of their players in a variety of ways, the UFC does painfully little for its fighters, even top contenders, outside of a few tepid promo packages and an interview or two. It's part of the reason why so few current UFC champions draw pay-per-view buys. Moreover, if not for the NBA, pro basketball players would make a small fraction of their current income playing in foreign basketball leagues. The situation is even worse with American football pros, who wouldn't even make 5% of their current salaries overseas. Meanwhile, many UFC fighters would make comparable or greater money in Bellator MMA, One Championship, Professional Fighters League or other rival promotions. We know this because those fighters who have gone to those other organizations have stated as much, including elite contenders who left on winning streaks, such as Gegard Mousasi, Ryan Bader and Sergio Pettis. Did I also mention that the UFC has less job security and guaranteed money than other sports leagues, and no pension?

So, for offering painfully little, the UFC grabs a much larger share of income. And yes, this is abnormal even among other MMA promotions. Bellator fighters, for instance, receive 44.7% of the organization’s total income. (Interestingly, Scott Coker's previous promotion, Strikeforce, paid fighters over 60% of total income)

However, this has had a relatively modest effect on UFC fighter salaries. Why? Well, because even before the pandemic, Bellator made just 5% of the UFC's total revenue. The UFC can afford to pay relative peanuts and match them since they're so much richer overall.

Most UFC fighters thus had little choice but to grin and bear it, but then an unlikely savior came along. Standalone boxing freak show pay-per-views! Like the UFC, they're lucrative for the promoters, but unlike the UFC, they're lucrative for the fighters as well. Not only do they have the effect of making many UFC fighters, including reigning heavyweight king Francis Ngannou and top middleweight contender Paulo Costa realize how badly they were being underpaid, but it also offers a nice alternative for famous names. White insultingly dismissed Costa's concerns by noting that he hadn't built up a Youtube following since he was 13. However, neither did Ben Askren, who based on his own comments, made far more for a single boxing match than he did in all three of his UFC fights combined.

His teammate, former welterweight champion Tyron Woodley, decided this was a sweeter, more lucrative gig than his waning UFC career, as he is set to take on Jake Paul next.

Now this is by no means a complete cure for the problem of UFC fighter pay. We don't know whether freak show boxing fights are a passing fad or possess genuine staying power. And even if it's the latter, no one has much interest in a random UFC fighter who is 2-2 in the organization. And yet, it's absolutely an option for big-name fighters. You don't think that Ngannou making a pro boxing debut would garner huge pay-per-view numbers? Or the proposed match between Georges St. Pierre and Oscar de la Hoya wouldn't have been a massive success? Or that Costa boxing either of the Paul brothers wouldn't massively outsell most UFC pay-per-view events, if only so people could finally see one of the Pauls brutally knocked out?

This could be a concern for White. Costa has already nixed a main event over his pay concerns, forcing the UFC to replace him with the far less intriguing Kelvin Gastelum, turning a serious contender's match into a meaningless, throwaway main event. And what if fighters use this possibility as a bargaining chip in negotiations when it comes time to sign a new contract? The UFC may have to pay more or watch their top-billed fights, the only ones they truly care about, suffer.

Beyond that, it shows the fighters that there are alternatives, and that skilled promoters can make a large profit while paying the fighters. That will cause them to look more critically at their UFC contracts and examine alternatives. Additionally, it may encourage more promoters to enter the combat sports landscape. While most will inevitably be failures, it still means more opportunities and pay for the athletes. Many shook their heads and condemned freak show fights for hurting legitimate combat sports. And yet, incredibly enough, they may well end up improving them!