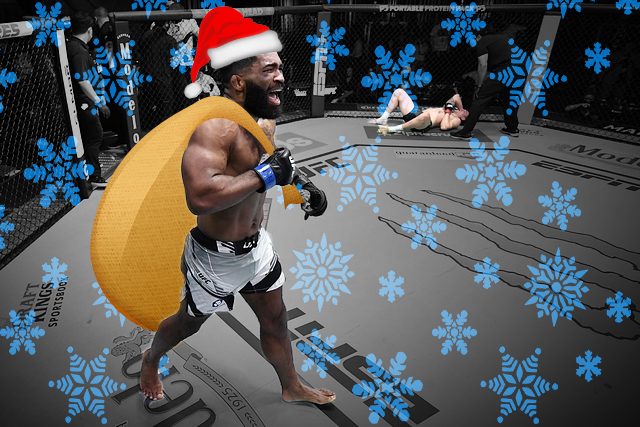 Regardless of what one celebrates, the December holidays are a magic, wondrous time of year. At its best, mixed martial arts also exhibits those qualities. Crazy knockouts, improbable comebacks and superhuman toughness often transcend reality, and are a large part of why I and others fell in love with the sport. However, after watching hundreds and even thousands of fights, one can lose sight of the fantasy. The same scenarios and situations repeat themselves, often in a very predictable fashion. It's easy to think one has seen it all and there is little that is new or creative. This is also exacerbated by how much more MMA there is nowadays. Less than 20 years ago, there were only five Ultimate Fighting Championship cards, averaging fights apiece, in an entire year, with a similar number of Pride Fighting Championships events. Watching high-level MMA was a rare treat that one savored. Now, there is more UFC product than that in a single month, on top of Bellator MMA, Rizin Fighting Federation, One Championship, Professional Fighters League, KSW and many other promotions with great fighters. It's easy to become jaded.

Don't fall for that trap! As two fights in Bellator and one in the UFC last week proved, there is still plenty of magic and wonder in MMA no matter how long one has been a fan and how much one has seen. Let's examine three December gems.


Bellator's final event of 2021 featured a spectacular bantamweight title battle between two of the best fighters in the world, in the prime of their careers. I predicted that Pettis would win a decision with his superlatively technical kickboxing, and for over 18 minutes, Horiguchi made me look very, very stupid. Horiguchi did a masterful job of circling away at range and firing kicks, not allowing Pettis to get a sense of the distance. While I had envisioned as much, I was utterly unprepared for the next part of Pettis’ brilliant gameplan. As he started to feel the range and began pumping his jab, one of the very best in MMA, Horiguchi would close the distance, repeatedly take Pettis down, and perhaps most impressively, keep him there. Keep in mind that in his last fight, Pettis won the bantamweight world title against Juan Archuleta, a former Division I college wrestler with very good chain-wrestling and a slew of different takedowns. Archuleta had zero success in getting Pettis to the ground. Yet here was Horiguchi, with no wrestling background, taking and holding the champion down! The Japanese superstar clearly won the first three rounds and there appeared to be nothing that Pettis could do about it. Pettis couldn't even put a glove or foot on the elusive, fleet-footed Horiguchi. He landed well below 10 strikes every round, with virtually none of them being significant. Not that Pettis is known for his power, either; he set a UFC record by earning all nine of his Octagon wins by decision, and while his power has marginally increased in Bellator as he has entered his prime and matured physically — Pettis was 20 when he first fought in the UFC and 26 when he left — he will never be a feared puncher. Additionally, Horiguchi is exceptionally hard to finish with strikes, with only ferocious knockout artist Kai Asakura doing so in his 32 previous bouts. Even facing world-class kickboxer Tenshin Nasukawa in a kickboxing match for Rizin, Horiguchi made it to the final bell. The prospect of Pettis landing a knockout blow, especially after three rounds had elapsed, seemed laughable.

Horiguchi was probably around a -4000 favorite in the live odds halfway through Round 3. One could be forgiven for treating his victory as a foregone conclusion, and then this happened:

What a way to end the 2021 Bellator MMA season LIVE on @SHOsports. #Bellator272 pic.twitter.com/g8Kstu4E3v

Not only did Pettis stop Horiguchi with strikes, something he hadn't done to any opponent since 2013, when he was 19 years old, but he authored perhaps the best knockout in all of MMA for 2021, missing the right head kick that Horiguchi ducked under but continuing to rotate through with a left spinning backfist that rendered his foe unconscious for minutes, until he had to be stretchered out. As violent as the finish was, it was equally magical and wondrous: one that no fan saw coming.


On the same preview show noted above, I had lamented that Curtis was only allowed to enjoy his sensational upset knockout victory over Phil Hawes for less than a month before being thrown to the wolves against Allen, who I expected to maul him. That was less a reflection on Curtis than on Allen, who I heaped enormous praise on, stating he could well be a future UFC world champion at 185. (Yes, I still believe this. Feel free to mock me) I ended my analysis by exclaiming “poor Chris Curtis!” Most people felt similarly, as Curtis was the biggest underdog on the card.

Only no one bothered to inform Curtis of this. Despite having limited time to prepare against a young, spectacular, heavily favored opponent, Curtis again uncorked another tremendous highlight reel finish. After losing the first round, Curtis never became discouraged in his ability to win, and when Allen got a little loose and sloppy early in the second, Curtis took immediate, brutal advantage. Magic can strike twice, especially for a warrior like Curtis!


Lastly, we come to the most wondrous fight not only of the past week, but likely all of 2021. It's one thing to see something highly unexpected and improbable, like Curtis beating Allen or even Pettis needing a knockout late and coming up with perhaps the best of the year, but what about when we see something that we previously considered impossible?

I've never understood Carlyle. Even now I don't. He wins matches and I have no earthly idea how. His striking and grappling are both sloppy and flawed. He fights like a madman possessed in the first round, but is badly gassed afterwards. The closest I can come up with is that Carlyle has an inhuman, supernatural degree of toughness that refuses to ever accept defeat.

And after what he did against Moret, I'm a fan for life. I've never seen anything like that and perhaps I never will again. Taking the fight on just one week's notice, Carlyle had even less energy than usual. After the first four minutes of Round 1, he was utterly spent, taking big gulps of air and struggling to put any power in his strikes. In Round 2, he was so exhausted that he couldn't even raise his arms up. Meanwhile, Moret, who had recorded a huge upset in his Bellator debut by winning a split decision against contender Goiti Yamauichi, and looked much improved since his stint in the UFC, shellacked Carlyle. He battered him from pillar to post, inflicting hellacious damage to the head and body with dozens and dozens of punches and undefended knees. On at least three separate occasions, the referee was close to stopping it. Moret at one point even went for a rear-naked choke from the side, and Carlyle had so little energy and was so beaten down that he almost succumbed to it. It was a miracle that Carlyle even survived Round 2. I scored it 10-8, but there was an excellent argument for 10-7.

At the beginning of Round 3, Carlyle summoned all his remaining strength for one last, desperate flurry. He even managed to hurt Moret, but lacked the energy to follow it up, and a minute in, he was gassed again, this time barely able to stand. Moret was tired now too, but he still had plenty of stamina to get a Thai plum and abuse Carlyle with knees to the body.

At this point, Carlyle had zero chance to win. If the odds for Moret to win had been -10000, I would have taken them. Not only was he behind on the cards and needing a stoppage, not only had he sustained a tremendous beating to both the head and body, but the man lacked the energy to even throw a punch!

And then, it happened. Moret had Carlyle fully mounted halfway through the round, as the “Super Alpha Ginger” audibly gasped for air. Carlyle, finding a supernatural energy reserve, scrambled and managed to pick up and sweep Moret, landing on top. Moret instantly turned his back and attempted to post up, but was too slow; Carlyle had already managed to take his back and get both hooks in. From there, Carlyle locked in a rear-naked choke. Moret, who had never been submitted in his entire career, refused to tap, as the crowd went hysterical and commentator Mauro Ranallo's voice went up several octaves. Suddenly, Moret went limp and the impossible had happened. Carlyle drunkenly walked and collapsed to the center of the cage amid thunderous applause. And I was left wondering what amazing magic I had just witnessed inside the cage.

The next time you watch MMA, don't approach it as a jaded fan who has seen it all. View it with a sense of wonder and amazement, because there is always something fresh and exciting to be discovered.