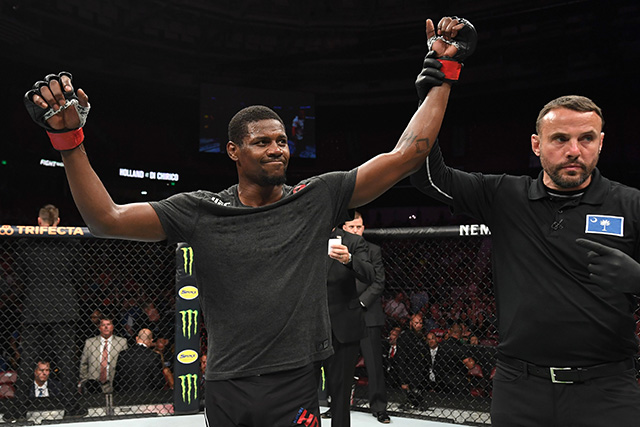 At first glance, the headline seems like basic common sense. Of course fighters should adequately prepare for bouts! And yet, during the pandemic era, it's increasingly one that those in the Ultimate Fighting Championship ignore. The demand from the company for filling out cards is greater than ever, especially with many potential combatants being unable to travel and others pulled at the last second due to positive COVID-19 tests. And from the fighter perspective, it's an opportunity to make money they may desperately need, especially since many are not full-time martial artists, and their other jobs, even if it was just teaching jiu-jitsu classes, have been harmed during the months of the pandemic. This is perfectly understandable, and I'm not about to advise any fighter what they should do in such a difficult situation. However, there is also a belief, one shared by many fans, that competing despite abbreviated training camps, or mere weeks after their last match, isn't such a big deal.

And there is indeed one shining example of this mindset, the man featured in this article's cover image, Kevin Holland. Entering 2020, he was a fringe member of the roster, having won two very controversial decisions most felt he deserved to lose, one to Alessio Di Chirico and the other to Gerald Meerschaert, before being shellacked by Brendan Allen. He exited 2020 as Sherdog’s Breakthrough Fighter of the Year, going a perfect 5-0, sealed with a knockout for the ages over the legendary Ronaldo Souza, cementing himself as perhaps the hottest young contender for the 185-pound title in a suddenly wide-open division. One of the ways Holland did this was by fighting constantly, often on short notice. While five fights in a calendar year doesn't sound so crazy, four of those were in August or later.

However, much like how playing the lottery is a terrible idea even if there are occasional winners, Holland is a severe exception who, through a mixture of unique traits and plain luck, defied the odds. However, adopting his approach is still a terrible idea for one's career success, as we will see in two examples from Holland's own weight class, and one of whom he faced.

Why is Fighting Often, on Short Notice Such a Bad Idea?


Again, this may seem obvious, but let's go over the problems here. Firstly, fighting often means lots of draining weight cuts without an opportunity to fully recover from the last one. Doing so on short notice means having to cut upwards of 30 pounds in a limited amount of time, which is even worse, and a great way to wind up in the hospital. It should be noted too that major weight cuts make it harder for the brain to absorb blows and also saps one's cardio, and doing so repeatedly in a very short period of time only exacerbates both problems. I wince when I read about fighters cutting weight twice within a few weeks. Many people were surprised at how flat Tony Ferguson looked against Justin Gaethje, but not myself; he had cut an insane amount of weight just three weeks prior, for a match that never happened!

Beyond the weight cut, one's brain often isn't fully able to recover from the head trauma and one's body from the inevitable injuries and wear received in the fight itself. Thus, there is a lack of recovery on two levels, both the arduous weight cut and the damage from the combat itself.

As a third element, one simply isn't able to prepare properly for one's specific opponent, or get all their skills sharpened to a fine edge. Legendary boxing trainer Teddy Atlas mentions on his podcast that he likes his fighters to have six-to-eight week training camps, and that the least amount of time it's possible to get any sort of preparation done is in three weeks. Needless to say, lots of fighters are competing on much shorter notice than that.

How Did Holland Defy the Odds?


Despite all those obstacles, how did Holland manage to win every fight in 2020, many on short notice or weeks after his previous one? Several reasons have to do with Holland's unique traits as a fighter. For one, he cuts shockingly little weight. He has mentioned in interviews before that he walks around at only 196 pounds. In a world where lightweights walk around at that weight, the fact that Holland does so as a middleweight is an outlier. This drastically reduces one of the obstacles to fighting often or on short notice, that of the lack of recovery from grueling weight cuts. In Holland's case, it's just 10 pounds to the non-title limit, far easier on the body than the 30-plus pounds many of his co-workers have to shed. Moreover, cutting such an amount doesn't harm either his chin or cardio so much.

Additionally, there was relatively little damage for Holland to recover from. He destroyed Anthony Hernandez in just 39 seconds. He defeated Joaquin Buckley while sustaining only mild damage, most of it in the first round. After a hard-fought split decision victory over Darren Stewart, in which he received his share of blows, rather than facing his original opponent, the surging Makhmud Muradov, he fought overmatched late-notice replacement Charlie Ontiveros, whom he proceeded to smash apart in half a round while receiving no damage. That leads us to the final fight against Ronaldo Souza, which he won in less than two minutes. There was only one very difficult, taxing fight there, against Stewart. If Holland had a few more fights like that, he either wouldn't have been able to compete so regularly, or else his performances would have gravely suffered, and he might not have gone the year undefeated.

Thirdly, Holland, for better or worse, fights every opponent in similar fashion, which he can largely get away with thanks to his tremendous height, reach, and grappling. Thus, he is hurt less by a lack of preparation against opponents than others would. Against every opponent, he is able to use his longer reach to stay on the outside and pot-shot them with his jab — much improved in 2020 — as well as his right cross and kicks. And given his ground game, heavy on scrambles and improvisation, Holland is never too worried about being taken down, even against “Jacare.” If he were of average height for the weight class, or less confident in his jiu-jitsu, Holland would have to adjust his approach a lot more based on the specific opponent.

Last but not least, Holland was definitely the beneficiary of plain old luck. Buckley was fighting him on even less notice, having competed a week earlier in Legacy Fighting Alliance, an example to which we will return. Ontiveros replacing Muradov was a stroke of good luck, and as awesome as it was, winning via hammerfists from his back against Souza is not the most consistent or predictable path to victory. Had they fought 10 times, it's hard to imagine that occurring more than once.

But while it worked for him due to the reasons mentioned above, this mentality of fighting anytime anywhere hurt the careers of two very bright prospects.

The Opposite Case: Buckley and Kasanganay


In an amusing coincidence, one of Holland's victims in his triumphant 2020, Joaquin Buckley, is a cautionary tale about the dangers of this mindset, as is one of his own victims, Impa Kasanganay.

Buckley is a very talented striker who nevertheless possesses some defensive flaws and a shaky chin. I've been a fan of his since I first saw him in Bellator MMA in 2017, and at only 26, he has plenty of time to get even better. Unfortunately, he decided to make his debut against Holland, already a challenging proposition, only about a week removed from a fight in LFA against Jackie Gosh. While he scored a nice stoppage, avenging a knockout loss from 2016, he certainly received a decent amount of punishment from his game rival as well. Thus, not only did he undergo two large weight cuts in two weeks but was also dealing with the residual effects of the Gosh fight itself when he stepped in against Holland.

After that defeat, Buckley refused to wait the roughly six months that fighters are normally advised to take after suffering a knockout loss. Instead, he fought Kasanganay just two months later. Kasanganay was himself fighting for the third time in two months, and after a fairly even battle, Buckley scored perhaps the greatest knockout in MMA history. Riding high off this, and as confident as ever, Buckley faced Jordan Wright just six weeks later. While he scored another highlight-reel knockout, he certainly received some damage. Throughout these affairs, Buckley wasn't evolving or improving as a fighter. He had no time to!

And while he managed to beat talented but inexperienced foes like Kasanganay and Wright, this approach met its logical conclusion against Alessio Di Chirico earlier this year, a bout only two months after the one against Wright. The tough, skilled veteran di Chirico took advantage of the defensive holes Buckley still hadn't fixed, knocking him out with a beautiful head kick. Had Buckley taken his time and not rushed from fight to fight, he might have avoided this major setback, which takes some of the luster and hype off his name after the Kasanganay victory.

Speaking of Kasanganay, I've been tremendously impressed by him. Already a very solid, gritty martial artist who never goes away in a battle when he scored a massive upset against Kailin Hill on the 2019 Dana White's Contender Series, he vastly improved when he returned and defeated Anthony Adams on the show a year later. Certainly the future looked very bright for the then 26-year-old, who had all the tools to be a Top 10 force in the division.

Unfortunately, rather than getting a chance to work on this, he started immediately taking fights on short notice, one after the other. While I don't expect Dana White, who sees most of his employees as mere bodies, to look out for Kasanganay, it's a shame no one on his team did. After an impressive victory against dangerous if unreliable Maki Pitolo, he fought for a third time in two months against Buckley, which is where his undefeated record suffered its first setback. And honestly, it probably didn't need to happen. If Kasanganay had more time to improve, would he have held on to Buckley's foot for so long, not sensing the danger? If he hadn't needed to make three grueling weight cuts and wasn't recovering from two full 15-minute affairs in as many months, would he have been as slow to dodge that spin kick, and would he have been slept by it, rather than merely hurt?

It's hard to say, but I have a good sense he might have avoided the highlight-reel loss had they fought six months later. While he can still recover from the loss and have a good career, it's yet another reminder that even for the most confident, intriguing young prospect, fighting too often on short notice is a bad idea!
« Previous Fight Facts: UFC Fight Night 185 Next Stock Report: UFC Fight Night 185 »