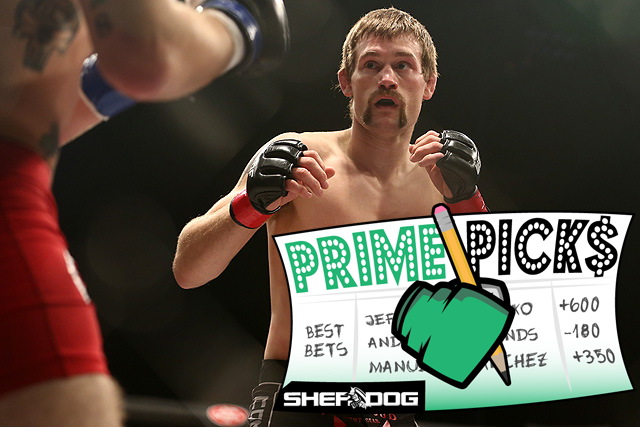 Two Ultimate Fighting Championship events take place this weekend, meaning there will be plenty of betting opportunities out there for fight fans.

On Friday night, the Octagon heads back to Las Vegas for the “The Ultimate Fighter 28” Finale, while on Saturday evening UFC Fight Night 142 takes place in Adelaide, Australia. There are over 20 bouts available to bet on between the two cards, and here are my top selections for the weekend in this edition of Prime Picks.


One of my top picks this weekend is dos Santos, who takes on Tai Tuivasa in the main event of UFC Fight Night 142. What I like about dos Santos in this fight is his experience. JDS is a former UFC heavyweight champion and he has fought and defeated a who’s who during his (likely) hall of fame career. He’s defeated the likes of Cain Velasquez, Stipe Miocic, Fabricio Werdum and Mark Hunt and in his last fight he returned from a USADA sanction with a five-round unanimous decision win over Blagoy Ivanov. I had questions about JDS after his long layoff prior to the Ivanov fight -- he had suffered a couple of bad knockout losses before that -- but he turned in one of the most complete performances of his career. I like the fact JDS has proven he can go five hard rounds, and we all know he has exceptional knockout power. He might not be a championship-level heavyweight these days, but he’s still a top-10 talent, and Tuivasa is arguably a step down in competition.

Although Tuivasa is undefeated at 8-0 with seven knockouts, his level of competition does not compare to JDS. He may have knocked out Cyril Asker and Rashad Coulter in his first two UFC bouts, but a close decision win over Andrei Arlovski in his last fight was disappointing. Most even thought he should have lost that decision. His cardio didn’t hold up very well and he was unable to finish a notoriously chinny fighter. Tuivasa does have a couple things going for him here, however, as he’s only 25 compared to 34 for JDS and he’ll also have the hometown advantage. But the lack of big-fight experience is something I can’t ignore. I think JDS wins this fight, and at -155 odds I see value in betting on the former champ.


A prospect who I’m really high on is Crute, who fights Paul Craig on the UFC Fight Night 142 undercard, and I believe he gets his hand raised. Just 22, Crute is already one of the youngest light heavyweights in the UFC and at 8-0 he’s undefeated as a pro. He’s shown a well-rounded skill set with finishing abilities both on the feet and on the ground, including a TKO win on Dana White’s Tuesday Night Contender Series that earned him an Ultimate Fighting Championship deal. His level of competition has been rather mediocre fighting on the Australia regional circuit, but he’s ran through everyone he’s faced. I don’t see why he can’t do the same against Craig, who is lucky to still be in the UFC. After losing back-to-back fights via knockout, Craig rallied with one second left to defeat Magomed Ankalaev in his last fight via submission. Just one second later and Craig would have been on a three-fight losing skid and out of the UFC. Craig has some decent submission skills, but really, that’s it. This looks like a fight the UFC has booked to get Crute a knockout win over Craig in his UFC debut, and at -235 I think Crute is a good bet here.


Another prospect that should win their fight is Shevchenko, who fights Ji Yeon Kim at the “TUF” 28 Finale. Just like her sister Valentina, Antonina is an exceptional muay Thai striker and her striking skills were on display in her TKO win on Dana White’s Tuesday Night Contender Series. Shevchenko is undefeated at 6-0 as a pro MMA fighter and she also has plenty of experience in kickboxing and muay Thai. She’s arguably the top striker in the UFC women’s flyweight division besides her sister and Joanna Jedrzejczyk. For her UFC debut, Shevchenko will take on Kim, who took this fight as an injury replacement on short notice. Kim is 2-1 in the UFC, but both of her wins were contentious split decisions and she could easily be 0-3 right now. I just haven’t seen anything special out of Kim and this looks like a situation where Kim was the only fighter willing to fight Shevchenko on short notice. This should be a wipeout for Shevchenko, and at -300 she is going to be a very popular parlay piece this weekend.


As far as underdogs go, one I have my eye on is Glenn, who fights Kevin Aguilar at the “TUF 28” Finale. There are a couple of things that I like about Glenn here. First off, he has UFC experience and that can’t be dismissed. He’s already proven he can win inside the Octagon, and a split decision win over Dennis Bermudez his last time out could be a huge confidence booster. A former World Series of Fighting champ, Glenn has had plenty of finishes throughout his career and is also incredibly durable, having never been knocked out. His takedown defense is questionable, but overall he’s a very game and gritty fighter who has always been underrated by fans and media. He takes on Aguilar this weekend, who took the fight on short notice. A standout in Legacy Fighting Alliance, Aguilar has won seven straight bouts to get into the UFC, including a split decision victory over Joey Gomez on Dana White’s Tuesday Night Contender Series. He has 10 knockout wins, with his lone loss coming against UFC vet Leonard Garcia via TKO. Even though that loss was five years ago, it doesn’t sit well with me, and I wasn’t super impressed with Aguilar in the Gomez fight. This should be a competitive fight, but I see Glenn winning. At +105 there’s some value in him as the underdog.

Adam Martin is a mixed martial arts journalist who has been covering the sport since 2011. He is currently the lead odds analyst for Sherdog.com as well as the lead staff writer for MMAOddsbreaker.com. Adam is also the co-host of “The Parting Shot Podcast” on iTunes. His favorite fight of all time is Dan Henderson vs. Shogun Rua and he wishes Pride never died. Adam is based out of Toronto, Ontario, Canada, and he is a graduate of the University of Toronto and Centennial College. Get in touch with him on Twitter @MMAdamMartin.
« Previous Fight Odds Beating the Books: UFC Fight Night 141 Next Fight Odds Prime Picks: UFC 231 »