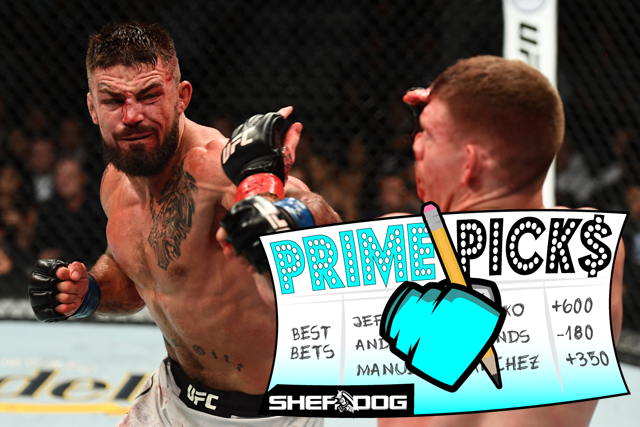 
The Ultimate Fighting Championship celebrates its 25th anniversary this weekend in the birthplace of the Octagon as UFC Fight Night 139 takes place Saturday at Pepsi Center in Denver.

The card features a number of action fighters who should put on a great show for the fans, as well as make money for those betting on the fights. There are 12 bouts on the card and odds are available for all of them. Below are my four favorite picks in the UFC Fight Night 139 edition of Prime Picks.


The main event is a tremendous featherweight bout between Rodriguez and Chan Sung Jung. Both men are known for putting on exciting fights and this one should be an incredible battle between two guys looking to become title contenders at 145. I’m a big fan of watching both compete, but I favor Rodriguez, and I’m surprised he’s the underdog in this contest.

Although both men haven’t competed in over a year, Rodriguez has been far more active in recent years. Jung has only fought once in the last five years, a knockout of Dennis Bermudez in 2017, and between injuries and mandatory military service in South Korea he just hasn’t had much cage time. When he has fought he has looked like an elite featherweight, but it’s hard to put much trust in one who fights so infrequently.

Aside from his TKO loss to Frankie Edgar, Rodriguez has looked unstoppable in the Ultimate Fighting Championship and could easily be a future champ if he can clean up his ground game. He has a versatile and dynamic striking attack, which we saw in his knockout of B.J. Penn and if he can regain that form he can easily make another run for the title considering he’s only 26. Something to keep in mind is that Rodriguez took this fight on just a few weeks’ notice, but still, I think stylistically he has a number of advantages in this fight that I’m willing to look past that. He might get the finish or have to settle for a decision, but Rodriguez has a good chance to win and +115 he should provide plenty of value.


For a parlay piece, I like Perry to defeat Donald Cerrone in what is the on-paper frontrunner for “Fight of the Night.” Perry has several advantages in this fight as he’s the younger fighter who hasn’t taken as much damage and he has huge KO power in his limbs. Cerrone has a ton of experience and has fought a high level of competition throughout his career, but he has taken a ton of damage and has really fallen on hard times as of late with a 1-4 record in his last five. Cerrone’s chin has not held up well, and that could be a disaster going up against a knockout artist like Perry. It’s also fair to bring up all the drama at Jackson-Wink MMA with Perry joining the camp and Cerrone going his own way. I just can’t see this fight ending well for Cerrone, and more times than not I see Perry getting the knockout. At -210, Perry is one who should be considered parlay material this weekend.


Another fighter who makes for good parlay fodder is de la Rosa, who battles Joby Sanchez in a bantamweight contest. I really like de la Rosa to get the win in this fight and think the odds are reasonable. He’s a decent prospect who bounced back nicely from his short-notice UFC debut to Tim Elliott to get a submission of his own against Elias Garcia. Considering the style matchup, this could represent a good opportunity for de la Rosa to get another finish. What I don’t like about Sanchez is that he just can’t seem to win in the Octagon, and his ground game looked poor his last time out against Roberto Sanchez. On the regional circuit Sanchez is a pretty good fighter, but at the UFC level he just hasn’t cut it with a 1-3 record. Not to mention Sanchez took this fight on very short notice and the deck seems stacked against him. I think de la Rosa’s grappling is going to be what gets him the win. I see him being able to get Sanchez to the ground and a submission seems likely there. At -245 the odds are pretty good on de la Rosa for one half of a two-fighter parlay.


For a bigger underdog, I would take a long hard look at Trizano, who takes on Luis Pena in a battle of “TUF 27” castmates. Trizano won the show with a split decision nod over Joe Giannetti and is still undefeated as a pro, with experience fighting for the UFC, Bellator MMA and Ring of Combat. Pena, meanwhile, got injured in the house and had to withdraw from the tournament, but he made his debut at the Finale and kept his streak alive. Both Trizano and Pena are very solid prospects and in many ways this fight could have unfolded in the show’s finals. Pena is a pretty big favorite and I understand there is a lot of hype behind him, but Trizano is a very solid fighter himself and I believe he is being undervalued. I think this fight is closer to a Pick ‘em, so at +170 I see some value in Trizano as the underdog. If you want to have some action on this fight, perhaps a smaller play on the dog is the way to go.

Adam Martin is a mixed martial arts journalist who has been covering the sport since 2011. He is currently the lead odds analyst for Sherdog.com, as well as the lead staff writer for MMAOddsbreaker.com. Adam is also the co-host of “The Parting Shot Podcast” on iTunes. His favorite fight of all-time is Dan Henderson-Mauricio “Shogun” Rua, and he wishes Pride Fighting Championships never died. Adam is based out of Toronto, and he is a graduate of the University of Toronto and Centennial College. Get in touch with him on Twitter at @MMAdamMartin.
« Previous Fight Odds Beating the Books: UFC 230 Next Fight Odds Parlaying and Praying: UFC Fight Night 139 »