Fedor Emelianenko -- arguably the world’s top heavyweight and pound-for-pound fighter -- will make his eagerly awaited return against former UFC heavyweight champion Andrei Arlovski in the Affliction “Day of Reckoning” main event this Saturday at the Honda Center in Anaheim, Calif.

The longtime Pride Fighting Championships heavyweight king, Emelianenko (28-1, 1 NC) will put a virtually spotless record on the line against Arlovski (14-5) in what promises to be a memorable showdown between two decorated warriors.

Sherdog.com recently picked the brains of several professional fighters and trainers regarding the brewing battle between “The Last Emperor” and “The Pitbull.”

Alan Belcher: I can’t go against Fedor. [It] should be a good fight, but Fedor will get the submission in the end.

Urijah Faber: I say Fedor wins via unanimous decision, unless it’s a five-round fight -- then I say Fedor in the beginning of the fourth via TKO.

Rich Clementi: I have been really impressed with Arlovski as of late. His angled uppercut is my favorite in the business. I think he brings the upset.

Dewey Cooper: Will the perfection of Fedor finally run out? Will Arlovski’s fighting style give Fedor problems? This is an intriguing matchup because of Arlovski’s height and his movement. I see Arlovski doing very well early in the fight, but eventually, the durability of Fedor will become a major factor. Fedor will force a takedown and pound Arlovski into submission late in the second round.

Eddy Millis: I have Fedor by punch KO.

Pete Sell: Everyone around I’m sure is going with Fedor. I’m going against the grain and calling the upset. Either Andrei eventually cuts him or KOs him. 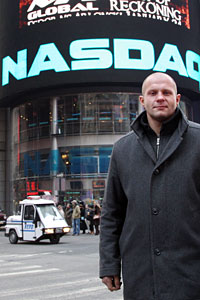 Tom Casino/For Affliction
Like always, Fedor
is all business.
Gabe Ruediger: Fedor should win by ground-and-pound. He always comes with a great gameplan and will exploit Arlovski’s ground game. Arlovski’s stand-up has dramatically improved, and I think he can knock anyone out, but Fedor is too complete.

James Zikic: Fedor by ground-and-pound in the first round. Too strong, too tough, too much of a complete warrior for Arlovski.

Patrick Cote: I’ll go with Fedor by submission in the second round.

Rory Markham: I believe Arlovski is going to surprise many with his ability to nullify Fedor’s takedowns and out-strike him. With the combination of Sean Bormet and John Kading [for wrestling] and Mike Garcia and Freddie Roach for boxing, I believe Andrei truly found the best recipe for success.

Kevin Burns: Fedor wins by TKO or KO. It’s going to be a good fight.

Nick Thompson: Anyone can lose … anyone not named Fedor that is.

Luigi Fioravanti: I like both fighters; tough fight to call. I have to go with Fedor by decision.

Kit Cope: I see a cautious Arlovski squaring up against a hungry Fedor in need of proving he’s still on top. Fedor likes passive punchers, especially in early rounds. Fedor early in this one.

Cub Swanson: Fedor is the better all-around fighter, and he has a chin. He will knock out Arlovski with big counter punches.

Shawn Tompkins: Fedor will submit Arlovski in the second round.

Jaime Fletcher: I don’t see Fedor having much trouble with Arlovski. Rumor has it that Arlovski’s gameplan is to stand with Fedor because his boxing is superior. This isn’t boxing; this is MMA. So it doesn’t really matter if his boxing is better. I think we all can agree that MMA striking is different from any form of fighting where you don’t have to worry about takedowns. I think Fedor puts everything together so well, and his will to win is second to none. Arlovski has been looking motivated and sharp since he left the UFC, but, to me, there isn’t any facet of this fight that he can dominate. Fedor before the end of round one.

Rick Roufus: Arlovski needs to work on wrestling and takedown defense. Fedor is not as good a striker [as Arlovski]. Fedor will take him down and ground-and-pound. I see Fedor by strikes on the ground.

Zac George: Fedor may get out-boxed, but Arlovski won’t out-punch him. Fedor hurts Arlovski standing, then “Sambos” up an armbar.

Tom Gavrilos: Fedor. [He is] too multifaceted for Arlovski.

Michael Guymon: I know everyone is on the Fedor bandwagon, but I’m not on this one. Arlovski is a very tough striker that I think mentally won’t get caught up in the whole Fedor mystique. This is MMA, and anything can and usually does happen. Arlovski KOs Fedor in the second. Don’t tell Fedor I said that. I would not fight that guy with a sharp stick and a gun in the other hand.

Trevor Prangley: I don’t know about the second-round KO, but Arlovski can definitely pull off the upset in this one.

Scott Epstein: Fedor all day. Arlovski can only hope to TKO or KO Fedor -- hope being the key word. Who has been able to KO or TKO Fedor? Why would Arlovski be the one man to do it? I know Arlovski is training with Freddy Roach, and he looked great against [Roy] “Big Country [Nelson], but Fedor is a whole other animal. Let’s not forget that Fedor is not throwing the smooth crisp Western boxing punches that are being thrown at Arlovski at the Wild Card [Boxing Club]. He throws big wrecking balls. Arlovski will be able to see the wrecking balls and slip a few, but what happens when one connects? And what happens if the [expletive] hits the fan, or should I say ground? I don’t see what Arlovski is gonna do to survive. When fight time comes, I hope I’m wrong about everything I just said. Why? Because it will make [for] a fight that is unpredictable and way more exciting.