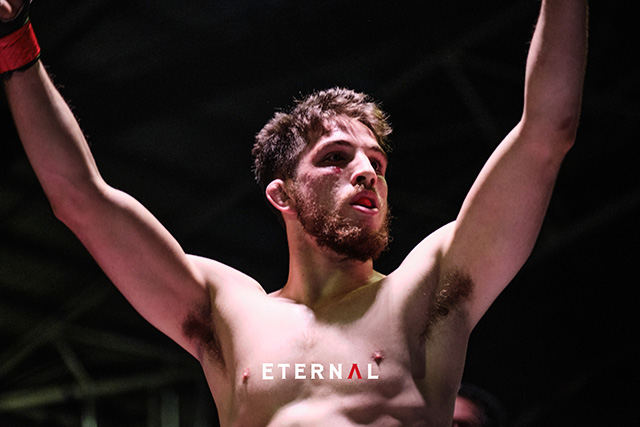 Photo of Quillan Salkilld | Provided by and published with permission of Eternal MMA.

For a sport that is not quite three decades old, one would be forgiven for thinking the evolution of mixed martial arts athletes has somehow been in fast-forward mode. From the style-versus-style matchups of the early Ultimate Fighting Championship tournaments, where competitors purported to utilize a single discipline to subdue their opponents, to the onset of multi-dimensional super athletes in the mid-2000s boasting credentials across multiple striking and ground-based disciplines, each year seems to have heralded its own generation of new-breed talent which has proceeded to set a new bar for combat excellence. In turn, the UFC and its rivals have continued to embed MMA further and further into the mainstream consciousness—spreading its tendrils through big fights, magnetic personalities and their attendant manifestations in other cultural domains—spurring ever more talented crops of young men and women to gyms and dojos across the civilized world.

Entering the fray as one of the most eye-catching prospects to emerge from the Australian region in recent years, the ultra-talented Quillan Salkilld admits his love affair with MMA started late in comparison to his peers. However, his relative inexperience in MMA training is belied by his in-cage ferocity, his athleticism and his indominable belief that MMA is his calling and his mission.

Having been introduced to the sport through the UFC video game when he was 17 years old, he first strapped on a pair of four-ounce gloves in March 2018 at the UFC Gym in Balcatta, Western Australia. Salkilld made his amateur debut after just six months, piecing together an impressive 8-3 record over the ensuing 26 months. Now, with his first professional bout on the horizon in the first quarter of 2021, he has gone all-in on making MMA his full-time vocation; and his recent performances have Australian MMA insiders singing the 20-year old’s praises.

“I didn’t even know what the UFC was until I played the game,” Salkilld told Sherdog.com. “I knew nothing about it. I was playing the game with one of my mates, and I was like, ‘S---, this is sick’. That’s how I became a fan of the sport, after playing it.

“I think in the back of my mind, I wanted to compete before I even started training. That was the goal,” he added. “I just wanted to test myself, you know? I’d never been in any kind of physical altercation growing up. I think it was more like an insecurity. I just wanted to get in there to test my mettle.”

What started as an idle curiosity quickly turned into an obsession when Salkilld began training in earnest and dipping his toes into the regional circuit. The then-teenager quickly abandoned his first and second loves of Australian-rules football and skateboarding, immersing himself into MMA competition and setting his sights on becoming a prizefighter.

“Skateboarding was my first dream,” Salkilld said. “I wanted to become a pro skater and move to America to pursue that. I did that for a couple of years. Then I got bored of it. I was living in Broome at that time, which is like a small town, so there weren’t many places to skate or people to skate with. Then I got back into football, which I had stopped playing when I [originally] started skating, and that was the next thing. I wanted to become an [Australian Football League] player; and then MMA took over from that.

“I just want to be great,” he continued. “After trying a few things, I found that MMA is my calling in a way. It’s the only thing I’ve had a bit of natural talent for. With skateboarding and playing football, I had to work really hard to even get mediocre, you know? With MMA, when I first started, I found that I was actually quite decent. Then I applied the hard work that I gained from football and skating … I translated that into MMA, and here we are.”

Next in Salkilld’s crosshairs is a transition to professional competition. The Luistro Combat Academy export recently announced on his Facebook page that he had signed an exclusive 12-month contract with surging Australian promotion Eternal MMA. All his bouts are scheduled to be broadcast on UFC Fight Pass. In his view, its stardom or bust, and he believes that on his current trajectory he will be signed by the Ultimate Fighting Championship within three years.

“Most of the [amateur] lightweights in Perth I’ve already kind of fought already, and I think I’m skilled enough and ready to go pro,” Salkilld said. “I’ve had 11 MMA fights and three kickboxing bouts. I have the experience and the skill set. I’ve agreed to only fight MMA with Eternal, which is good. I find that they’re the best Australian promotion around anyway. There’s not really anywhere that I would prefer to compete. It’s perfect.”

He has no backup plan in mind.

“I’ve put all my eggs in the MMA basket, for sure,” Salkilld said. “There’s nothing else I want to do. There’s nothing else I really even think about. MMA is on my mind 24/7. I believe by 2023 I will be in the UFC. I pretty much guarantee that, depending on how many fights I get. You obviously need to compete in quite a few fights in order to make it there. If I had four fights next year [and] four fights in 2022, I think that’ll be enough and I’ll get into the UFC by 2023.”

Though Salkilld carries himself with a confidence befitting a much older and more experienced combatant, his precociousness is paired with an acute understanding of what is required of him between now and signing with a major organization. Having found success in his MMA bouts largely through his grappling, he has begun taking professional kickboxing and muay Thai bouts to round out his striking arsenal.

“It’s both opportunity and a love of competition,” he said. “I think every MMA fighter should be competing in all of the different aspects of martial arts, just to increase the skill set and be comfortable in all areas. All my wins have been on the ground in MMA, so if I hadn’t had any striking fights, I would be uncomfortable on the feet. Now that I’ve had kickboxing fights, I feel I’m comfortable everywhere. I can be dangerous everywhere. I’m not one dimensional.

“If the opportunity is there, I still want to compete regularly,” Salkilld added. “As an amateur, I was competing whenever. As a pro, I want to make sure I’m well-prepared coming into my bouts. I don’t really want to rush things too much. I’m always training, all year round. I’m always ready with a couple weeks’ notice and ready to take a fight at any given time.”