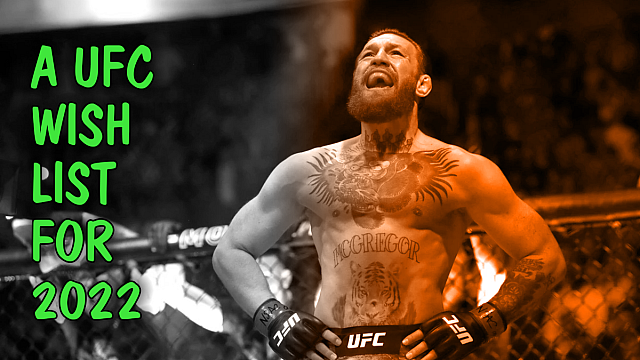 Last week, I shared my 2022 wish list for five of the Ultimate Fighting Championship’s 12 weight classes, offering one realistic or at least plausible thing that would make each division become more competitive, more stable or more entertaining in the coming year.

Read: A Wish List for Every UFC Division, Part 1 »


This week, as the UFC prepares to kick things off — and either fulfill or dash these hopes — we’ll take a look at the remaining seven divisions. Just as in Part 1, some of these divisions are in better shape than others to begin with, so the wishes range from luxury items to make the rich even richer, all the way to last-ditch efforts to resuscitate divisions on life support. To each according to their need.


As noted, some divisions need more help than others, and 155 needs less than just about any. Lightweight has probably been the deepest, most competitive division in the sport for the last 10 or 12 years, and the UFC’s stable of 155-pounders has been the cream of the crop for most of that time — certainly since the acquisition of World Extreme Cagefighting brought the likes of Benson Henderson, Anthony Pettis and Donald Cerrone into an already stacked roster. Right now, the division doesn’t need much. The belt is strapped to a consistently exciting finisher in Charles Oliveira, who has a nice story to boot. There is an obvious next challenger in Justin Gaethje, and that matchup is an instant “Fight of the Year” contender. The Top 15 is a murderer’s row of the type that only its next-door neighbors at 145 and 170 pounds can even dream of matching.

So what do you get the division that has everything? Well, it would be nice if McGregor’s return to action took place this year, and at lightweight. If it happens, he’s probably no more than one win away from another title shot; former champs generally have an easier road back to the top in the UFC, let alone the sport’s biggest star. There’s even the possibility that McGregor could step directly into a championship fight, losing streak be damned. Fighters, fans and media alike would howl at the injustice, but it’s worth noting that those howls are rarely echoed by the opponent who actually stands to share the McGregor payday. If nothing else, “do Bronx” is a prizefighter. Let the man fight and collect his prize.


Keep whom separated, you ask? Giga Chikadze, Arnold Allen, Ilia Topuria and Movsar Evloev. Heading into 2022, men’s featherweight is the equivalent of an Olympic marathoner who just stubbed their toe: in great shape, going to be fine, just needs a moment to recover. The division has an incredible crop of up-and-comers in the quartet mentioned above, who collectively boast an astonishing 23-0 record in the UFC (57-3 overall) and feature just one member over the age of 27.

All I want for this division in 2022 is for these four men not to fight one another. That the scheduled bout between Topuria and Evloev later this month fell through is a sign that perhaps the universe is already sympathetic to my pleas. In case it’s still listening, I will elucidate: Dear Universe, I know the featherweight division is weirdly short on ready contenders right now, despite its huge pool of talent. That’s how we got Alexander Volkanovski vs. Max Holloway 3 in the first place, and now that Holloway is out, it’s Volkanovski vs. Chan Sung Jung, which kind of underscores the problem. Please let these four fighters, who represent the likely future of the division, not meet one another in 2022 unless it’s in a title eliminator, and if that must happen, please let one of them be Chikadze, who is 33 and seems the most ready for prime time. Amen.

Men’s Bantamweight: Return of the Cringe


OK, Henry Cejudo, you’ve had your fun. Now come back and remind us why all the goofy antics were worth putting up with. For those who claim that fighter pay isn’t a problem, I offer the counterargument that Jon Jones, Khabib Nurmagomedov and Cejudo — arguably the three best pound-for-pound men in the sport and certainly no worse than Top 5 — did not fight at all in 2020 despite being in their physical primes, and in at least two of three cases the problem could have been solved with money.

Petr Yan is the interim bantamweight champion, scheduled to finally try and unify the belts against the oft-injured Aljamain Sterling early this year. I’m worried the bout will fall through again. You’re worried it will fall through again. Yan and Sterling are probably worried it will fall through again. The UFC isn’t even worried; it’s already doing its best to erase Sterling from our memory. Bantamweight is in a weird place, what with Sterling being the only champ in UFC history to win his title via disqualification, and it’s worth noting that the entire reason that happened is that the title had been vacated by Cejudo. The return of “Triple C” would be an instant shot of life, as he could immediately fight Yan, Sterling or T.J. Dillashaw, whether for a title or not. It’s ironic that it might take one of the UFC’s weirdest fighters to help things feel normal again.


Generally speaking, I’m against immediate title rematches unless the first fight featured legitimate controversy: an obvious gaffe by referee or judges, a freak injury or foul — see Yan vs. Sterling — or something of the sort. Otherwise, I think the UFC short-changes itself and its audience by killing off promising rivalries before they have a chance to truly develop, as was the case with Dillashaw and Cody Garbrandt, for example.

The UFC is highly likely to run back Julianna Pena’s upset for the ages over Amanda Nunes at UFC 269 as soon as possible, and while I’d still rather see both women get a chance to fight someone else first, as immediate title rematches go, this one isn’t too bad. Pena’s win was shocking, but it came from a smart strategy and the guts to make it work, not some one-in-a-million punch. I want to see whether she can replicate the feat, or Nunes will make the necessary adjustments. Meanwhile, Nunes is probably the greatest female fighter in MMA history — definitely in UFC history — and deserves some small benefit of the doubt. Also, unless Kayla Harrison comes over and challenges Nunes for her other belt, there’s frankly nobody else I’d care to see her fight. If Nunes wins back the belt, we probably have an instant trilogy. If Pena wins again, we have one of those rarest of MMA feelings: surprising closure.


When chatting off the record, most of my friends in MMA media, at Sherdog as well as other outlets, seem to share two opinions: Brandon Moreno is a whole lot of fun; and Brandon Moreno is one of the UFC champs most at risk of losing his belt this year. It’s never meant as a slight against “The Assassin Baby,” either; just an acknowledgement that the exuberant Mexican is young, somewhat wild and still developing, and that the flyweight Top 10 is a piranha tank right now.

While flyweight isn’t as deep overall as the next four heavier men’s divisions, it might be the division with the most buzz at the top heading into 2022. The division is full of young, streaking fighters, most of them haven’t fought Moreno — or each other — yet, and most of them are dynamic in the extreme. While other weight classes are starved for immediate title contenders, flyweight has plenty, enough so that Garbrandt’s failed debut last month was no big deal for the division, and Cejudo would be far better served to come back at 135. Whatever happens this year at men’s flyweight, it’s probably going to be a blast.


Like heavyweight and men’s featherweight, the women’s 125-pound division has a crew of promising young prospects on the rise: Taila Santos, Erin Blanchfield and Miranda Maverick, just to name a few. However, where featherweight would be best served for now by keeping its blue-chippers away from each other and from Volkanovski, flyweight is in a situation closer to heavyweight, where practically anyone is four wins away from the title picture. Valentina Shevchenko has so thoroughly cleaned out the division’s original crop of contenders that there’s practically nobody for her to fight; don’t forget that before Nunes lost at UFC 269, there had been growing calls for a Nunes-Shevchenko trilogy despite Nunes being up 2-0, and it was due more to Shevchenko’s lack of options than Nunes’.

The division desperately needs a new face at the top, and the best possible thing would be for Santos or Blanchfield to win one or two more — OK, maybe three more for Blanchfield — or for Maverick or Maycee Barber to get back on track. One of those young guns is needed to help usher in the division’s next era, even if it’s by losing to the pound-for-pound queen.


The 115-pound division is fine. In fact, it barely seems to be aging. Of the five women that have worn the UFC strawweight belt, Carla Esparza, Joanna Jedrzejczyk, Rose Namajunas and Weili Zhang are still in the Top 5, and Jessica Andrade could be if she wanted. The championship round robin between those five has yielded some of the best fights and most sensational finishes in recent years.

Now that Esparza seems to be the promotion’s choice to challenge for the belt she once inaugurated, all is well at strawweight. It’s time for the rumors of a UFC atomweight division to come to fruition. I will lead off by acknowledging that in one of my first articles for this site, I expressed doubt that there were enough 105-pounders to make a viable division. A few years later, things have changed quite a bit, as more and more strawweight-atomweight ‘tweeners have come over from Invicta FC, and Rizin Fighting Federation and One Championship have developed a stable of women who are at least within spitting distance of 105 pounds. How differently might the UFC careers of talented but undersized women like Michelle Waterson and Jinh Yu Frey have gone if there had been an appropriate weight class for them from the start?