No one in Ultimate Fighting Championship history has inspired widespread vitriol any better than Colby Covington, a man who pokes and prods the masses with a special brand of outlandish hubris and hyperbole.


Advertisement
The 32-year-old Clovis, California, native was an NCAA All-American wrestler at Oregon State University before he made the move to mixed martial arts on a full-time basis in 2012. Covington honed his skills at American Top Team—a powerhouse gym from which he recently split—and raced out to a 5-0 start to his career before signing with the UFC. He won 10 of his first 11 fights inside the Octagon, emerging as the consensus No. 1 contender in the welterweight division, all while his super villain persona brought him newfound fame and notoriety.

As Covington awaits his next move, a look at a few of the rivalries that have numbered his steps: 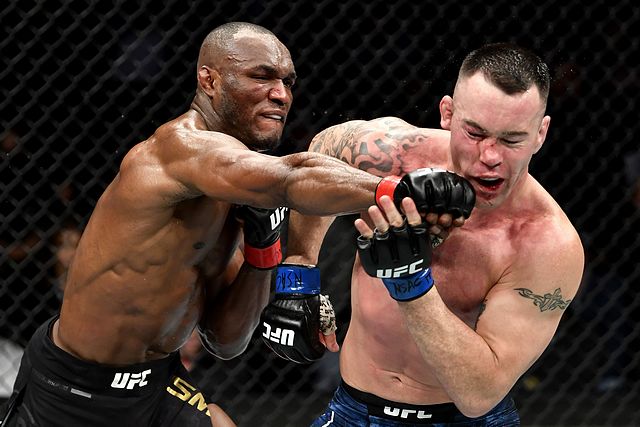 Usman broke Covington’s jaw and put him away late in Round 5. (Photo: Jeff Bottari/Getty Images)


“The Nigerian Nightmare” kept his stranglehold on the undisputed welterweight title, as he buried Covington with punches in the fifth round of their UFC 245 headliner on Dec. 14, 2019 at T-Mobile Arena in Las Vegas. Covington succumbed to blows 4:10 into Round 5, as he tasted defeat for the first time in more than four years. Usman had to work hard to defend the mountain. Covington vaulted out to a strong start behind volume punching combinations, often punctuated by powerful rolling overhand lefts. Usman answered by going to the body and began to turn the tide in Round 3, where he withstood an inadvertent eye poke and shook the challenger’s jaw with a devastating right hand. They went to the fifth round with the outcome still in doubt. In the closing minute, Usman dropped the American Top Team export with another straight right, denied a desperation takedown and closed the door with a burst of unanswered hammerfists. 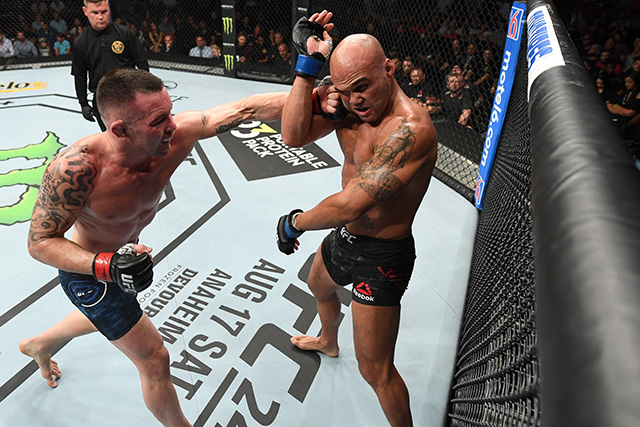 
Covington had too much horsepower for Lawler. Repeated takedowns, a merciless pace and high-output standup carried “Chaos” to a unanimous decision over Lawler in the UFC on ESPN 5 main event on Aug. 3, 2019 at the Prudential Center in Newark, New Jersey, cementing him as the No. 1 contender in the Ultimate Fighting Championship’s welterweight division. All three cageside judges saw it for Covington: 50-44, 50-45 and 50-45. Lawler never got out of neutral. Covington overwhelmed him with takedowns at the start, wore down the former EliteXC and UFC champion in the clinch and applied maximum pressure with his punches. Lawler spent far more time bobbing and weaving than he did returning fire. Covington punctuated his latest conquest in the closing seconds of Round 5, where he connected with a spinning backfist and cut “Ruthless Robbie” near his left eye. Afterward, he drew almost universal criticism for referencing the near-fatal train accident of longtime Lawler mentor Matt Hughes: “Let’s talk about the lesson we learned tonight. It’s a strong lesson. Robbie should have learned a lesson from his buddy Matt Hughes. You stay off the tracks when the train is coming through, junior.” 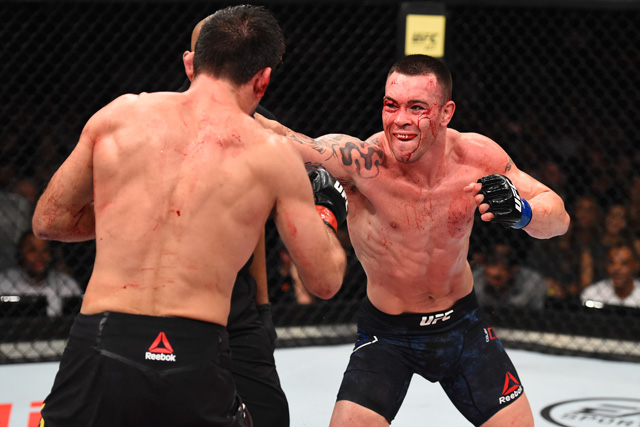 
The controversial Covington continued his ascent on the welterweight ladder and stepped over Demian Maia on his way up, as he laid claim to a unanimous decision over one of MMA’s most respected gentlemen in the UFC Fight Night 119 co-headliner on Oct. 28, 2017 in Sao Paulo, Brazil. All three judges scored it for Covington: 29-27, 30-27 and 30-26. Maia outstruck the NCAA All-American wrestler through much of the first round, opening a cut below his right eyebrow with a series of clubbing left hands. However, success for the 2007 Abu Dhabi Combat Club Submission Wrestling World Championships gold medalist was short-lived. Covington hit his stride in the middle stanza, sprawled out of attempted takedowns from the weary Brazilian jiu-jitsu black belt and picked him apart from the outside. He moved forward in Round 3, pressured and bloodied the stationary Maia with punches, denied his bid for takedowns and made him pay with heavy ground-and-pound in the waning moments. Covington then took to the microphone, called Brazil a “dump” and referred to those in the crowd as “filthy animals.”