Jan Blachowicz has done everything in his power inside and outside the Octagon to draw the gaze of reigning Ultimate Fighting Championship light heavyweight titleholder Jon Jones. Whether or not his efforts will bear fruit remains to be seen.

Blachowicz made his professional debut in 2007 and enjoyed a remarkably successful run in Europe, where he won three Konfrontacja Sztuk Walki tournaments and later captured the Poland-based promotion’s undisputed light heavyweight championship. He arrived in the UFC on Oct. 4, 2014 but failed to meet expectations and did little to distinguish himself in losing four times in his first six appearances. Whispers of a possible release made the rounds. However, Blachowicz has gone 7-1 since, with victories over Jared Cannonier, Nikita Krylov, Luke Rockhold and Ronaldo Souza propelling him toward the top of the 205-pound weight class.

As the 37-year-old Cieszyn, Poland, native plots his next move with UFC matchmakers, a look at few of the rivalries that have numbered his steps: 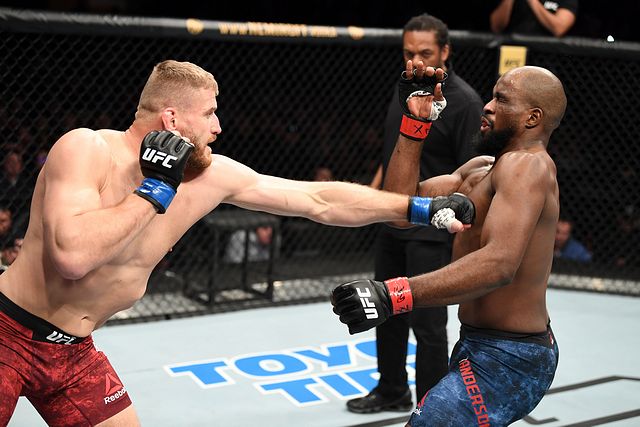 
Blachowicz shattered Anderson’s championship aspirations in the first round of their UFC Fight Night 167 main event, as he knocked out “The Ultimate Fighter 19” winner with a sweeping right hook and good-measure hammerfist on Feb. 15, 2020 at the Santa Ana Star Center in Rio Rancho, New Mexico. Anderson succumbed to blows 3:08 into Round 1. Neither man established much of a rhythm ahead of the stoppage. Blachowicz caught Anderson moving forward, ducked into a counter right hook and delivered a brutal standing-to-ground hammerfist on his defenseless target before referee Herb Dean could arrive on the scene. It was the seventh opening-round finish of his 34-fight career and the first in more than five years.

Anderson on Sept. 5, 2015 had beaten the former KSW champion at UFC 191, where takedowns and punishing ground-and-pound carried him to a unanimous decision at the MGM Grand Garden Arena in Las Vegas. Scores were 30-25, 30-25 and 29-26. Blachowicz connected with a few punches and executed a takedown of his own early in Round 1, but the Pole’s situation spiraled downward from there. Anderson closed the distance, took it to the mat and went to work. Blachowicz slowly broke, as “Overtime” fed him a steady diet of elbows, forearm strikes and short punches from top position.


His resume lends credence to the idea that Blachowicz learns from his mistakes, but he still managed to throw the oddsmakers a curveball and avenge an earlier loss when he took a three-round unanimous decision from the favored Manuwa in the UFC Fight Night 127 co-main event on March 17, 2018 at the O2 Arena in London. The “Prince of Cieszyn” outlanded Manuwa by a 124-37 spread and completed the only takedown of the match, providing the cageside judges with all the ammunition they needed to render 29-28, 29-28 and 30-27 scorecards in his favor.

“Poster Boy” on April 11, 2015 had defeated Blachowicz at Krakow Arena in Krakow, Poland, where he spoiled the Polish light heavyweight’s homecoming with a unanimous decision under the UFC Fight Night 64 banner. After a somewhat pedestrian first 10 minutes, Manuwa turned up the heat in the third round, as he connected at a 61-percent clip in significant strikes and outperformed Blachowicz by close to a 2-to-1 margin in total strikes. The Englishman drew 29-28, 30-27 and 30-27 nods from the judges. 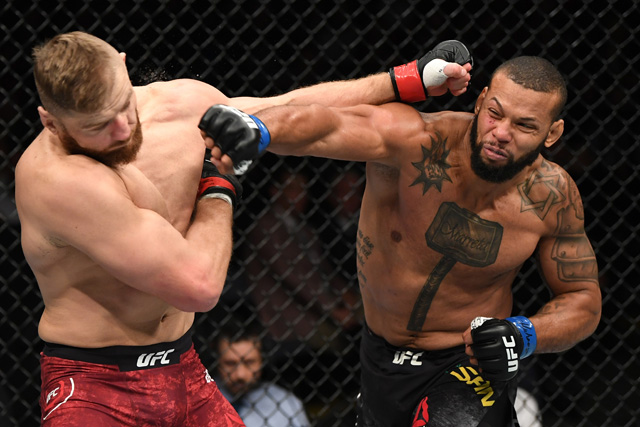 
Blachowicz discovered firsthand that miscues against “Marreta” are often disastrous. Santos established himself as a legitimate title contender in the light heavyweight division, as he unwound the WCA Fight Team export with a counter left hook and follow-up punches in the third round of their UFC Fight Night 145 headliner on Feb. 23, 2019 at the O2 Arena in Prague. Blachowicz met his end 39 seconds into Round 3, closing the book on his four-fight winning streak. The first and second rounds featured give-and-take exchanges, Blachowicz operating behind a jackhammer jab and Santos answering with clubbing right hands and kicks to the body and legs. Early in the third, the Pole overextended on an uppercut and left himself exposed. Santos leveled him with a searing left hook, pounced on his fallen counterpart and delivered rapid-fire hammerfists from side control until referee Herb Dean had seen enough.