Kevin Lee has a love-him-or-hate-him quality about him, but no one can deny the world-class skills he brings to the table.

“The Motown Phenom” made his professional debut in 2012, rattled off seven consecutive victories and signed with the Ultimate Fighting Championship a little more than two years later. Lee won nine of his first 11 fights inside the Octagon, but weight-cut issues, inconsistency and the death of trainer Robert Follis stymied his development. The Tristar Gym representative last competed at UFC Fight Night 170 on March 14, when he submitted to a third-round guillotine choke from Charles Oliveira. It was his fourth defeat in six outings. Still just 27 years old, Lee has plenty of time and the necessary tools to change course.

As Lee awaits his next assignment from UFC matchmakers, a look at a few of the rivalries that have marked his journey through mixed martial arts: 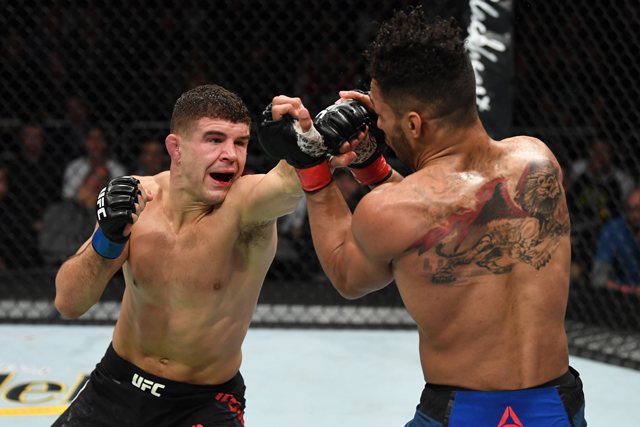 
“The Ultimate Fighter” Season 15 finalist persevered when met with adversity and outstruck Lee to a unanimous decision in the UFC on Fox 31 main event on Dec. 15, 2018 at the Fiserv Forum in Milwaukee. All three cageside judges scored it for Iaquinta: 48-47, 48-47 and 49-46. The five-round battle served as a rematch to their UFC 169 encounter on Feb. 1, 2014, which “Ragin’ Al” also won by decision. Lee failed to capitalize when he created opportunities. He struck for takedowns in the second and third rounds, moved to Iaquinta’s back and secured his position with a body triangle. Lee fished for rear-naked chokes to no avail, unable to crack the submission defense of a man who had been choked unconscious twice before. Iaquinta found another gear over the final 10 minutes, as evidenced by the fact that he denied Lee’s only takedown attempt and outlanded him by a 57-35 margin in the championship rounds. 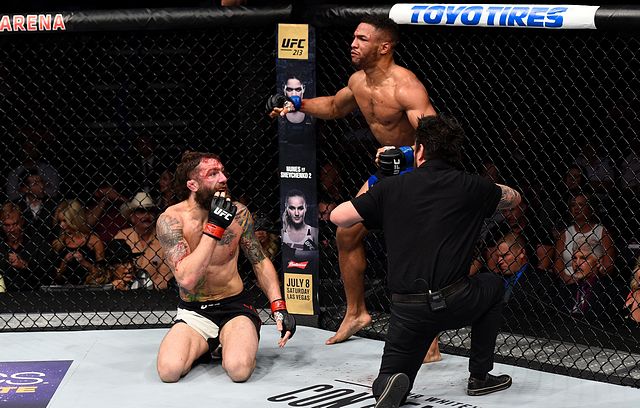 
Lee submitted Chiesa with a rear-naked choke in the UFC Fight Night 112 headliner on June 25, 2017 at Chesapeake Energy Arena in Oklahoma City, though the result was overshadowed by controversy. Referee Mario Yamasaki called for the stoppage 4:37 into Round 1, even though Chiesa neither tapped nor lost consciousness. Despite the officiating gaffe, Lee appeared to be seconds away from the finish. Chiesa had no answers for the combination of speed, skill and athleticism “The Motown Phenom” brought to the table. Lee executed a takedown inside the first 90 seconds, settled in top position after denying an attempted triangle choke and ultimately climbed to the back. His position secured with a body triangle, he drew blood with heavy ground-and-pound and snaked his arms into place for the choke. Soon after, Yamasaki was on the scene to rescue Chiesa, “The Ultimate Fighter 15” winner’s protests falling on deaf ears. 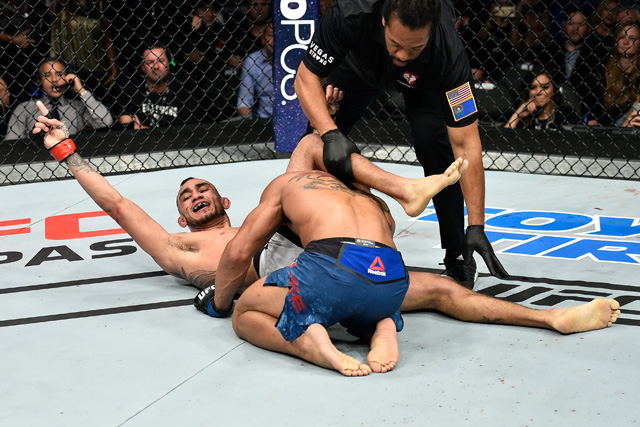 
“The Ultimate Fighter 13” winner laid claim to the interim lightweight title, as he submitted Lee with a triangle choke in the third round of their UFC 216 main event on Oct. 7, 2017 at T-Mobile Arena in Las Vegas. Lee conceded defeat 4:02 into Round 3, his five-fight winning streak having run its course. He pushed Ferguson to the limit in the first round, where he delivered a takedown, climbed to mount and unleashed a torrent of punches and elbows. The barrage might have finished a lesser man. Ferguson shrugged. Lee’s pace slowed noticeably in the second, and he continued to deteriorate physically in the third. There, he executed two takedowns but lacked the energy to consolidate them with damage. Ferguson nearly tapped him with an armbar before catching the triangle and eliciting the tapout.

« Previous By The Numbers: Mike Perry vs. Mickey Gall Next Alexander Gustafsson: Why I’m Fighting at Heavyweight in Octagon Return »