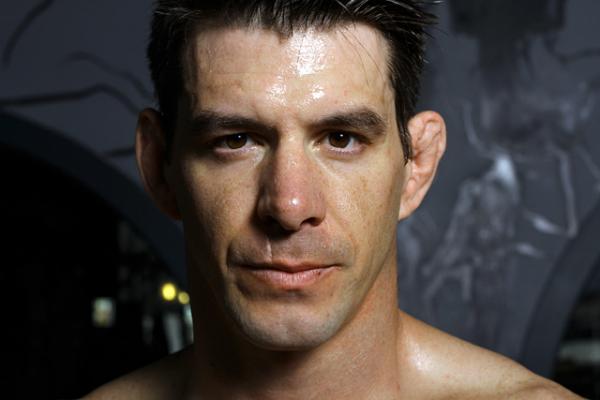 
Professional mixed martial arts fighters come from all kinds of backgrounds, but not many have the kind of resume middleweight prospect Jake Mapes sports.

A former professional baseball player and a black belt in Brazilian jiu-jitsu under Luis “Limao” Heredia -- one of Rickson Gracie’s original black belts -- Mapes is unbeaten in seven pro MMA bouts, with six finishes to his credit.

“Jake is super talented,” said Jeff Clark, his head coach at The Arena in San Diego. “He’s one of those guys who you can tell is different than most fighters. A lot of high-level BJJ guys get hit, drop to their butts and scoot around, but with Jake, he looks like a guy who started out striking and then went into BJJ. He’s got one of the best striking games I’ve ever seen from a BJJ guy.”

Mapes trains alongside accomplished martial artists like K.J. Noons, Joe Duarte, Chris Cope and Alexandre Ribeiro, and Clark said he more than holds his own against fighters with much more experience.

“Jake is really well-rounded,” said Clark, who has been working with Mapes for more than three years. “A lot of guys, all they know is that they’re good at BJJ or striking and you can game plan around it. He’s good at all of it. You take him down, he’s a black belt in Brazilian jiu-jitsu. It’s really easy to game plan for him and hard to game plan against him. He’s a lot more well-rounded than some fighters today.”

Originally from Hawaii, Mapes went to high school in California, played a year at Riverside Community College and was drafted by the San Francisco Giants in the 23rd round of the 1998 Major League Baseball First-Year Player Draft. However, a pair of arm injuries led to his being released during the 2001 season. Baseball’s loss was Brazilian jiu-jitsu’s gain.

“My first year, I broke my arm throwing to second base,” Mapes said. “Then I re-broke it and was out for about year. Minor league baseball can be a dog-eat-dog world, and after a year off, I fell too far behind and got released. When I was playing, in the offseason I had a personal trainer who was a purple belt and he talked about BJJ. I was interested but couldn’t do it because of baseball. The day I got released, I went and gave it a shot. I fell in love with it.”

Mapes admits he was disappointed that professional baseball did not work out as he had hoped, but he felt the move to Brazilian jiu-jitsu was the right one for him.

“I knew in my heart that I didn’t want to grind in the minor leagues,” Mapes said. “I liked it, but it wasn’t a passion. Actually, it was kind of a relief when I got released. I could do stuff when I wanted, plus I’d be living in Maui on the beach and training, so I went for it.”

Mapes focused on his Brazilian jiu-jitsu and eventually earned his black belt in September 2009. As a brown belt, he won multiple national titles and placed third at the world level in 2008 and 2009. Mixed martial arts briefly entered the picture, as Mapes made his professional MMA debut with a first-round submission of Kai-imi Santiago in November 2004, but he did not fight again for six years.

“I’d gotten my purple belt and was helping people train for their fights,” Mapes said. “Kendall Grove is a good friend of mine, and a lot of guys told me I should fight. I had goals for myself, though. I took a fight and it went well, but I wasn’t ready for it. I thought I needed to go through the whole education process before I went into fighting. I was an athlete, not a fighter, growing up and I wanted a solid foundation. Once I got my black belt, that’s when I started fighting.”

The 34-year-old Mapes recorded a pair of knockouts in 2010 and followed those with two more wins in 2011. However, he had just one victory in 2012 -- a first-round submission of Arthur Hancock in August -- and was out of action until May 4, when he recorded another first-round submission, this time tapping out Eugene Lawson at a Gladiator Challenge event.

“Right now, with my striking coming along really well, everything is kind of clicking for me and I don’t want it to pass me by,” Mapes said. “I want to put my best foot forward and let the chips fall where they may. I’m 34 already, so it’s time to s--- or get off the pot. I don’t want to have any regrets about my career. I don’t want to be 42 and wonder what might’ve been. I’ve got a good support system and I want to see what I can do. I don’t want a big gap between fights anymore. I want to stay consistent and stay on a hot streak.”

Mapes possesses the inherent toughness for which most Hawaiian fighters have become known, but he is working on avoiding career-shortening brawls that sometimes come with standing and trading with his opponents.

“If I could stand to work on something, I’d say my wrestling and counter-wrestling and learning my counterstriking,” Mapes said. “When I come forward, everything falls into place. I have to be better prepared when guys come forward on me. I’m always going forward, which is good, but we have to be prepared to face somebody like me. Plus, I come from Hawaii, so I like to bang. I’m not going to have a long career like that, I so need to try to be more evasive.”

Because Mapes is already 34, Clark knows he needs to ramp up his career progression and hopes to have him in a top-level promotion sooner rather than later.

“I’ve said this for a while, but I think he can contend with mid-level UFC guys right now,” Clark said. “In the gym, I’ve seen Jake manhandle guys who’ve fought at the highest level, but he sees all of his flaws rather than his strengths, so it’s a mental thing that’s holding him back. He’s ready to fight at a high level when he thinks he’s ready. He’s been there for a while, but we have to get it into his mind.”

Mapes thinks he is closing in on his opportunity.

“Honestly, I think I’m maybe one fight from taking on a former UFC guy or a guy with an established record,” he said. “Mentally, I feel like I’m ready. Confidence always has been an issue in my career, but I feel like I’m ready. I don’t want to wait anymore. I want to test myself. In our gym, I train with a ton of guys who have been in the UFC, but the gym doesn’t count. I want to go out there and do it under the lights.”
« Previous Prospect A.J. Matthews – Episode 3/3 Next Prospect Sherdog Prospect Watch: Five UFC-Ready Fighters »