After a bruising first week, we’re back with the second episode of “The Ultimate Fighter 11” and the boys can’t wait to get into their home away from home. Clayton McKinney and his teammates burst into the house and start picking their beds and rooms, like a summer camp for punchers.

All the contestants earned their spot in the house with some brutal fights last week and brutal fights make for beat-up fighters. Chris Camozzi had a tooth broken which is now infected. The aforementioned Clayton McKinney is nursing a possible tear in his rotator cuff and numerous fighters have faces that look as if they’ve kissed a claw hammer.

Everyone wants to know which team they’re going to end up on. Chris Camozzi is hoping to get onto Tito Ortiz’s team after being impressed and inspired by Ortiz’s encouragement during his fight.

UFC President Dana White announces there will be a coin flip to determine which coach will pick first. Ortiz wins the toss and is given the choice to pick the first fighter or the first matchup.

“It just seemed like every pick after that it was the guys I wanted,” says Ortiz afterward. “Liddell picked the guys I didn’t want.”

One by one they’re chosen and the jerseys are put on. Camozzi gets his wish by siding with Ortiz, while his teammate James Hammortree sizes up the opposition.

“They kind of look like ‘Willy Wonka and the Chocolate Factory,” says Hammortree. “You got one tall one and then they’re all five-foot nothing.”

White questions Liddell’s choices joking around with Ortiz in the locker room. They both seem stunned that Liddell would pick mostly undersized guys.

“I think Tito got the right team today,” says White.

White then pulls Liddell aside to get him to explain his choices, but Liddell thinks he knows what he’s doing.

“I’m going to try and take what they do and make it a little better,” says Liddell heading into his team’s first training session. We are introduced to Liddell’s assistant coaches, including trainer John Hackleman. Liddell’s longtime coach doles out initial advice to the team to emulate Liddell, not Ortiz, if they want to be successful in the sport.

While Liddell works on the finer points and technique with his guys, Ortiz is already bellowing orders to his team with longtime assistant coach Saul Soliz and Cleber Luciano helping with the floor routines. 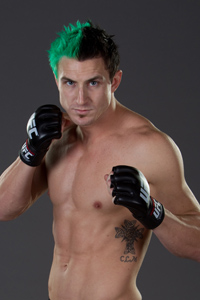 File Photo: Courtesy Spike
Ortiz has been hard on McKinney.
Ortiz puts an emphasis on explosive movement with his guys and makes it a point to single out Clayton McKinney, not even giving him a day to rest his rotator cuff. Ortiz explains that you have to get after the guys that nurse injuries so they keep pushing themselves.

When it’s time to pick the first fight, coach Liddell looks in the direction of the orally-concerned Chris Camozzi, who grins at him thinking his name is about to be called. Instead, Liddell chooses his No. 1 guy, Kyle Noke.

Camozzi thinks it could be because McKinney doesn’t have a good “poker face” and is letting his nerves show just enough for the sharks to detect blood.

During the commercial break, we’re treated to an extra scene where Tito Ortiz brings in some new shoes for his boys while explaining the importance of proper footwear. A regular Dr. Scholl’s that Ortiz. Who knew?

Brad Tavares, Kris McCray and Jamie Yager are instant BFFF’s, which stands for “best fighter friends forever.” Tavares explains that they all have common interests, traits and “are the only brown people in the house.”

It’s the second night in the house and they whip out air horns to blast ears at 3 a.m. That’s a nice shopping list for the house this year -- booze and air horns. Makes sense.

James Hammortree takes it the worst, unfortunately -- poor fireman wakes up thinking he’s at the firehouse and starts looking for his pants and boots.

The next day, McKinney has a chat with the doctor about his rotator and the MRI shows no tear, just swelling and extra blood. A bone bruise is the final diagnosis. McKinney starts his weight-cut and his team tries to keep his morale high.

We also learn that Aussie Kyle Noke came over to the states during a stint as Steve Irwin’s bodyguard and is now training out of Greg Jackson’s camp in New Mexico.

Liddell and Hackleman both feel great about Noke, so much so that Hackleman claims to not be able to find a chink in the armor just yet.

After training, Liddell’s team gathers around to ask him about his history with Ortiz. Tell us a story Mr. Liddell, please? Liddell explains that he’s hot about Ortiz claiming Liddell needed rehab for alcoholism.


“
He might get dropped here and
knowing Tito, he’s that big a
pu--y he might press charges.

“He might get dropped here and knowing Tito, he’s that big a pu--y he might press charges.” Liddell tells the camera without an ounce of levity in his voice.

It’s feliz cumpleanos for Tito Ortiz and a piÃ±ata is brought in for the celebration -- a Chuck Liddell piÃ±ata no less, full of money.

Once the piÃ±ata is busted open, somebody slaps on the Liddell head, lefts his shirt and mimics his famous chest-out, gorilla style circle-around the cage to the delight of many.

It’s fight time and, of course, McKinney’s teammates think he’s got a good shot while Liddell’s team is convinced Noke will smash him.


The fight starts slow as they circle each other feinting and exchanging occasional leg kicks. After a few minutes, Noke finally closes the distance and McKinney circles behind him and can’t quite pick him up for a slam. Noke drops low for a kneebar, but McKinney smothers him on top. While McKinney tries to find the right position, he fumbles his way into the wrong spot. Noke begins to work for a triangle choke and McKinney doesn’t get his head up in time. All his struggling just makes it worse as Noke tightens it up, causing him to tap at the two-minute mark of the first round.

Team Liddell gets the first win of the show and is in control of the next matchup. While they congratulate each other, McKinney is disgusted by his effort and begins to amble out the door until Ortiz pleads for him to come back. Ortiz is hell-bent on showing McKinney what went wrong and how it could have been reversed. He patiently demonstrates to McKinney his mistake, then makes the fighter practice the move two times so it soaks in. Ortiz’s attention to his squad could be key in keeping his team unified in fights to come.