At just 22 years old and just having gone pro, it’s hard not to compare the excitement surrounding Western Australia bantamweight Cody Haddon with that of Aaron Pico, circa 2017.


Advertisement
Pico, who earned accolades in boxing, wrestling and pankration as a teenager, turned heads when he transitioned to MMA full time in 2017 as a mega-prospect signing for Bellator MMA. In terms of pre-MMA accolades, the parallels between Pico and Haddon – who has proven to be a prodigy in boxing, Brazilian jiu-jitsu and amateur MMA – are difficult to deny.

Haddon first stepped into a taekwondo club at just six years old, and after blitzing his first tournament that same year, he recalls his entire family collectively realizing he might just have a future in hand-to-hand combat. Next came training at his first MMA gym – operating under the label “freestyle martial arts,” which Haddon speculates was a conscious choice by the owners to distance its academy from the bad publicity attached to cage fighting at the time – and a steady diet of karate, taekwondo and muay Thai competitions in the under-10 age bracket. It was then that Haddon first met future Ultimate Fighting Championship competitor Brian Ebersole, who showed him the foundations of ground fighting, and set his sights on becoming an MMA fighter well before such a career path was on the mainstream radar.


In Haddon's amateur debut, he won by submission in under a minute.


From age 10 to 18, Haddon pursued greatness in amateur boxing as well as BJJ. The first time he competed in the squared circle, he weighed just 28.9 kilograms (65.7 pounds). He moved up in weight year by year, picking up gold at the National Championships twice in the schoolboy division and once in the junior division. At the same time, he continued to train and compete in grappling, winning gold four times at the Pan Pacific IBJJF Championship and making it to the World No-Gi Brazilian Jiu Jitsu Championship in California in 2017.

“I was doing all these sports individually,” recalled Haddon fondly. “I used to get picked up from school and go from taekwondo to jiu-jitsu, or I’d go from jiu-jitsu to boxing in the evening back-to-back. I was active in all these separate disciplines.”

Haddon flirted with going all-in on the sweet science in his mid-teens, but decided against it due a combination of back and head injuries and a couple of decisions he felt should have gone his way at his final two appearances at the Nationals. He stuck with his BJJ and continued to sharpen his striking arsenal, and by the time the cage ban in Western Australia was lifted in 2017 – meaning MMA fights contested there would no longer have to take place in a boxing ring – he was ready to put a team together and transition to MMA full-time. He was 19 years young.

“I started training out of my jiu-jitsu school, Coringa Jiu Jitsu,” Haddon said. My coach Fabio [Coringa Andrade Nunes] said we could use the gym here. I kind of formed a team with some guys who had trained out of Albuquerque, New Mexico at Jackson-Wink MMA.”

“MMA has always been the goal, 100 percent,” he continued. “When I was a little kid I asked my Dad to put me into all the different disciplines. Along the way, I had to prioritize what I could compete in. Now that I can, I don’t really have any interest in boxing. Jiu-jitsu comps I’ll jump into, but not focused on that. It’s all MMA. That’s what my training is focused on. It’s all under one roof, rather than jumping from gym to gym.”

Mediating his journey from the mats to the cage has been Cody’s father, Tyrone, who competed in taekwondo competitions as a young man and was an avid fan on the UFC well before it was popular. It was Tyrone who initially exposed Cody to the fight world some 16 years ago, later supporting his youngest son when he decided to leave school at the end of Year Nine so that he could devote more of his time to training. 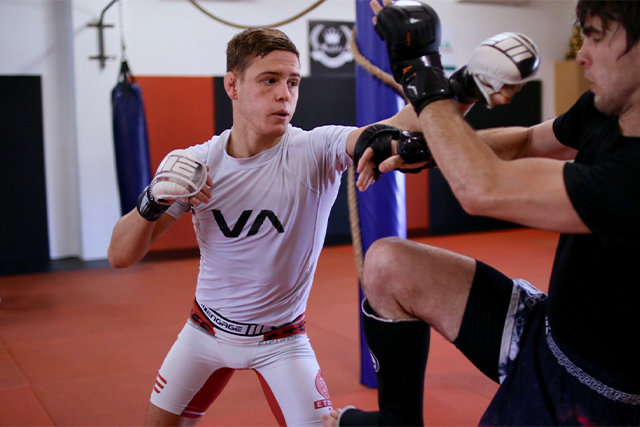 
“I could leave school on exemption if I had an apprenticeship,” Haddon said. “We told the school I was doing an apprenticeship under Dad in his steel fabrication business, but really I was just going to train. I used to go to the factory and work for him during the day, and then at 2:00 I’d go to training, and in the morning I’d still have time to run. Even when I was working, he wouldn’t let me use the grinder or the drill or the welder. He said, ‘If you cut your fingers off, you’re not going to be able to fight,’ so I’d sweep the floors and do other stuff that wasn’t dangerous.”

“Teachers were always asking me about what route I was going to take in life,” he continued. “And I said fighting. They used to tell me I needed a backup plan; I told them this was all I’m going to do.”

To date, Haddon hasn’t needed the Plan B his teachers were warning him about. Between May 2018 and September 2019, the boy from Perth, Western Australia fought five times as an amateur, piecing together a perfect 5-0 record, all by finish. After his last amateur fight, a second-round TKO over the unheralded John Calderon, Haddon suffered a severe ankle injury that put him on the shelf for the remainder of 2019 and much of 2020. When he returned to the cage, it would be as a pro, now under the Luistro Combat Academy, where he’s reconnected with Ebersole.

“The injury gave me a kick up the ass” Haddon recalled. “I felt like I was wasting time. My career wasn’t going anywhere, it was stagnant. At least if I’d had a pro fight, then gotten injured, I would have made that step, and been still climbing. It made me think that if I have a real serious injury, slipped a disc in my back or something, that I’d never even be able to start my career.”

Haddon’s debut as a pro came at Eternal MMA 53 last October, opposite the “Australian Diego Sanchez,” Shantaram Maharaj. With a 10-7 professional record and having competed against the likes of future UFC and One Championship fighters Kai Kara France, Ben Nguyen and Reece McLaren, Maharaj promised on paper to be a tough out for the debutant. That is, right up until the bell rang, at which point Haddon promptly took Maharaj down and beat him like he owed him money. After just 68 seconds, with Maharaj’s blood already spraying across the canvas, the referee had seen enough and waved the fight off.

“It felt like it was exactly what I deserved,” Haddon said when asked how it felt to deliver such a spectacular TKO in his debut. “It didn’t feel surreal, I wasn’t in disbelief. It was exactly what I expected to happen, it’s what should have happened. I’ve been training my whole life for this. Don’t get me wrong, it felt good. Finally, my career’s taking off. But I had already been living my life like this. I considered myself to be a professional fighter, even though I was fighting in the amateurs. I’d already been watching UFC fights and seeing how I match up with the athletes. I’m only watching top guys.”

Haddon, who signed an exclusive deal with Eternal MMA in December and is guaranteed a minimum of three fights annually broadcast on UFC Fight Pass, thinks he can get to 5-0 by the end of the calendar year and be challenging for the promotion’s title sometime in 2022. After that, he says he’ll be waiting by the phone for the first major promotion to call and offer him a contract.

“I know that these guys at One Championship and stuff like that, they’re getting paid a lot of money even for their first fights on the show,” Haddon said. “Bellator as well are doing great things and are throwing around a lot of money. To be honest, it kind of comes down to whoever kind of calls first. I would need to discuss it with my manager, but really, it’s an international promotion. That’s where I want to be. And just because you’ve been in Bellator or One doesn’t mean that you can’t get into the UFC. The UFC is the most prestigious, but we all have to live. If some other promotion is going to pay me more money to do the same thing, that’s the route I’m gonna choose.”

Haddon’s approach to the business side of fighting is refreshing, and reflects his deep-seated belief that he has all the skills to be the next big Australian export in the world of mixed martial arts. So far sponsors seem to agree with his assessment, with the youngster’s Instagram page already awash with paid endorsements for everything from MMA apparel and supplements to barber shops and Crossfit.

Like all of his MMA fights to date, the one on the horizon is his most important to date. On Feb. 14, Haddon will fight Mark Familiari in the co-main-event of Eternal MMA 57 at Perth’s HBF Stadium. As always, Haddon is confident he’ll get the win – the 1-6 Familiari is a considerable underdog – and is eager to begin climbing the ranks to the bigger names on the Australian regional scene.

“To be honest I want to fight the guy with the belt right now” Haddon said. “But for the champions to fight me is a big risk for them and little risk for me. They’ve worked hard to get there. It’s not fair on them to fight a 1-0 up-and-comer. I need to build my record up to get title shots. From there I’ll fight bigger names, get belts and start making my climb.

“I’m a bit of a perfectionist. My goal was to be, as an amateur, at the level of a pro,” Haddon continued. “And to be at UFC level by the time I started as a pro – which I believe I am. That way, by the time I get to the UFC, I’ll be champ level.”

Jacob Debets is a lawyer and writer from Melbourne, Australia. He is currently writing a book analyzing the economics and politics of the MMA industry. You can view more of his writing at jacobdebets.com.
« Previous Prospect Watch: Quillan Salkilld Next The Sheehan Show: 3 Irish Fighters the UFC Should Sign »
More
Latest News
+ VIEW MORE