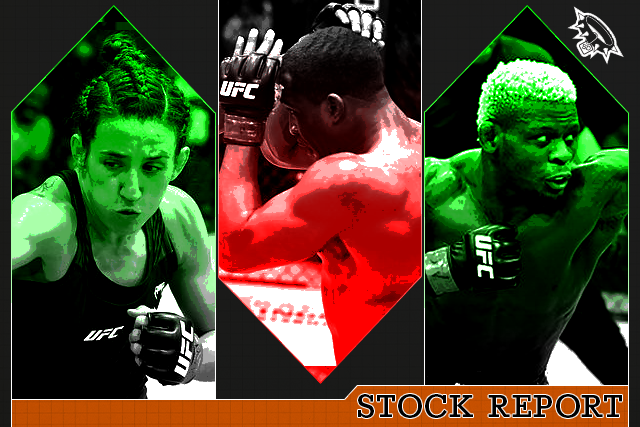 The main question after Marina Rodriguez’s dominant performance on Saturday is how much a win at flyweight can tell us about her standing in the strawweight division.

In the main event of UFC on ESPN 24 on Saturday, Rodriguez thoroughly outstruck Michelle Waterson for four out of five rounds on the way to a unanimous decision win. It was perhaps the best overall performance we’ve seen from the 34-year-old Brazilian, and it came against her biggest-name foe to date. The rest of the piecemeal nine-fight card followed suit, with several promising fighters putting on career-best performances. Others disappointed, either falling short of expectations or showing signs of decline. Here is the stock report for “UFC Vegas 26.”


With apologies to Alex Morono and Phil Hawes, the single most impressive performance of the night came courtesy of Gillespie. Questions swarmed like hornets around the former NCAA wrestling champion as he returned to the Octagon a year and a half after his crushing knockout loss to Kevin Lee: Was he too small to compete with top lightweights? Had Lee exposed a flawed chin that future Gillespie opponents might exploit? Would “The Gift” be gun-shy or tentative in the wake of his first career loss? Adding pressure to the situation, Gillespie would need to answer these questions while facing Diego Ferreira, one of the most underrated, dangerous contenders in the division, who came in five pounds heavy to boot.

Gillespie came through with flying colors. He got the worst of a wild five minutes of grappling in the first round, and was visibly shaky on his feet as he headed back to his corner. He came out 60 seconds later a different man. It’s difficult to use terms like “heart,” “digging deep” and “wanting it more” without sounding hokey, but however you want to describe it, Gillespie picked up momentum while Ferreira faded. Gillespie imposed his elite wrestling, this time without needing to fear the sweeps and scrambling of his fatigued opponent, and when referee Chris Tognoni finally pulled him off of the turtled-up and unmoving Brazilian with less than 10 seconds left in the round, it felt like an act of mercy. At 34, Gillespie is just a bit behind where he could be in terms of in-cage experience. He has time to make a run at the top, but he could not have afforded another setback on Saturday. Problem averted, and Gillespie’s next opponent is likely to have a single digit next to his name.


Hawes has a bit of a prospect feel despite being in his 30s, and despite having been a potential next-big-thing for over three years now. In the case of “Megatron,” however, his arrival was delayed as he made unsuccessful forays on “The Ultimate Fighter” and Dana White's Contender Series. By the time he finally punched his ticket to the UFC last year with a win in his second Contender Series appearance, it would be a stretch to call him a bust, but probably fair to say expectations had slipped just a bit. It was easy to picture the former junior college wrestling champion with the lightning fists as a tantalizing prospect who might not put all the pieces together in time.

Hawes’ win on Saturday over Kyle Daukaus, himself one of the UFC’s top middleweight prospects, was impressive on several fronts. He mixed his wrestling and striking more smoothly and efficiently than ever before, keeping Daukaus off-balance and guessing for much of the fight. After losing the first round, Hawes took over in increasingly dominant fashion for the last 10 minutes of the fight, battering Daukaus for a 10-8 third round. For a man of Hawes’ musculature and fast-twitch physical prowess, signs of three-round cardio are encouraging. And finally, Hawes navigated the aggressive guard of a dangerous submission artist without getting into any real danger. With all due respect to his string of first-round blitz knockouts, this was the scariest performance of Hawes’ career — or should be, for the rest of the middleweight division.


We can pick at some of the details of Rodriguez’s headlining win over Waterson. The fight was contested at flyweight, which certainly favored the tall and rangy Rodriguez over Waterson, a former Invicta FC atomweight champion who probably did not have to cut weight at all for this fight. While Rodriguez buried “The Karate Hottie” under a blizzard of crisp muay Thai combinations for the first three rounds, Waterson won the fourth round easily by taking Rodriguez down and controlling her, size difference be damned.

However, this performance was in some ways exactly what we needed to see from Rodriguez. Given that her 3-1-2 record heading into the fight featured a loss and two draws that could easily have been scored in her favor, there’s something to be said for simply coming out and beating a fighter she was favored to beat, in convincing and uncontroversial fashion. It was the right win at the right time; the strawweight title picture being what it is, Rodriguez may be just one more win away from a title shot. She would be well served to stay close to fighting weight this summer as Xiaonan Yan and Carla Esparza prepare to duke it out, and as the UFC decides what to do with former champs Weili Zhang and Joanna Jedrzejczyk; one injury or illness could speed things along even further.


There are few one-two punches more devastating to a UFC career than missing weight and then losing badly. (Losing, then failing a post-fight drug test is worse, but that’s about it.) Ferreira had a rough night at the office on Saturday, blowing weight by four and a half pounds, then wilting under the ground-and-pound of a resurgent Gillespie in the second round of their main card feature. On one hand, the Brazilian by way of South Texas is still on decent footing despite back-to-back losses. His 7-4 record in a brutal division is even better than it looks, with losses only to Dustin Poirier, Beneil Dariush twice, and now Gillespie. His last two fights have been “Fight of the Night” barnburners, even if he forfeited the bonus for this one to Gillespie. In other words, it’s unlikely his roster spot is in any particular peril, but for a fighter who aspires to more than a mere roster spot, this was a crushing blow. As a 36-year-old lightweight, Ferreira’s window of peak physical performance is likely closing fast. Considering what it takes to work back up the 155-pound ladder, much will rest on his next fight.


Neal had what appeared to be an incredibly frustrating night against Neil Magny, as the tough and wily “Haitian Sensation” stifled Neal’s offense for three rounds. Neal, one of the sharpest boxers in the welterweight division, never seemed to get into any kind of rhythm; Magny used clinches, takedown attempts and a grabby lead hand to great effect. In some ways, the loss isn’t too damning. Magny is the second winningest fighter in divisional history for a reason, and beyond merely winning, he has a knack for nullifying the striking of opponents not named Lorenz Larkin. However, after Neal’s near-shutout against Stephen Thompson in December, that is now twice in a row that “Handz of Steel” has been turned away decisively at the door of the Top 15. More worryingly, it’s twice in a row that he has not shown much in the way of in-fight adjustments when things haven’t gone his way. At 30 and with blistering power, Neal can certainly regroup and come back better, but now is the time.