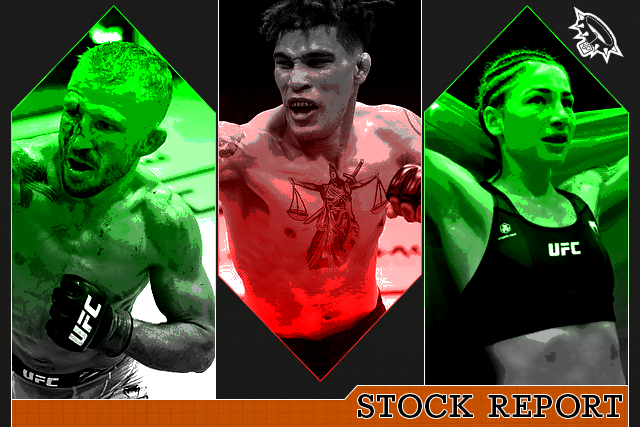 
At UFC on ESPN 27, a disgraced former king returned from exile and took a step towards regaining what was once his.

In the main event of the card also termed UFC Vegas 32, two-time Ultimate Fighting Championship bantamweight titleholder T.J. Dillashaw looked sharp and remarkably free of rust in taking a razor-thin split decision over Cory Sandhagen. After two and a half years of USADA-imposed suspension and in the wake of his disastrous attempt to drop to flyweight and challenge for a second belt, plenty of questions hung over the head of the 35-year-oild Californian. Assuming his tests come back clean, he appears to have answered most of them.

Dillashaw wasn’t the only fighter who did good things for his stock on Saturday, as the main card in particular was full of fights that left positive takeaways for both fighters. As well, there were of course fighters who disappointed or fell short in high-pressure situations. Here is the stock report for UFC on ESPN 27:


Full disclosure: I was among the majority of media members who scored Saturday’s headliner in favor of Sandhagen. It doesn’t matter. By the time the fifth round started, I knew Dillashaw would be on this list regardless of how the rest of the fight went or whose hand was raised afterward. Coming back from such a long layoff, for performance enhancers no less, at an age when most lighter weight fighters would be declining anyway, Dillashaw more than held his own with a Top 5 title contender — regardless of who you think won the fight. On even a more granular level, the ex-champ showed five rounds’ worth of cardio and a chin that held up to one of the division’s emerging knockout artists. In some ways, the grueling split-decision win was more reassuring than if Dillashaw had simply gone out and flattened Sandhagen in two minutes.

Again, this all presupposes that those pesky drug tests come back negative, but assuming he stays on the straight and narrow, Dillashaw just proclaimed that he is still a problem, here and now, for the division he once ruled. Considering how thoroughly and gleefully he would have been written off if he had performed poorly against Sandhagen — especially if he had looked slow or his chin or cardio had slipped — this was big.


Obviously the stakes are different when moving from Dillashaw vs. Sandhagen to Belbita topping Hannah Goldy in a matchup of women looking for their first UFC win, but this column isn’t about where you are; it’s about which direction you’re headed. While the 25-year-old Romanian must be understandably relieved to have gotten rid of the zero, the optics were encouraging as well. Dropping to strawweight, Belbita showed few signs of the strength deficit that had plagued her at 125 pounds, even against the burly Goldy. Instead, she delivered on the implied promise of her vaunted kickboxing credentials, piecing up her opponent with kicks and punches from a variety of ranges and angles. The only real blemish on the performance came in the closing moments, when Goldy secured a takedown and started laying a serious beating on her, which was interrupted only by the final horn. Time will tell whether that reflects a continuing vulnerability to very physical opponents, but it is time Belbita that now has, and that sounds like a win.


There was almost nothing Eubanks could do to help her stock against Elise Reed, a mildly promising 4-0 strawweight and onetime atomweight making her UFC debut. The gap in skill, experience and physical strength between the two women made it one of the most egregious mismatches in the Octagon this year. Eubanks did no more than expected in mauling Reed on the ground on the way to a first-round TKO.

However, the mere fact of “Sarj” making the flyweight limit without incident — and looking different, physically, from the woman who had failed to do so on multiple occasions before moving up to 135 pounds — was a promising sign. Eubanks is 36, so this move comes perhaps too late to achieve everything she might have, but considering how starved the division is for title contenders, there is certainly time for her to show us some of what might have been.


If Belbita’s performance was a fine example of dropping weight to modest expectations and managing to impress, Williams’ was the opposite. Finally able to drop from middleweight to welterweight thanks to management of his diabetes, “Bomaye” had a fair amount of buzz and an apparently favorable style matchup in Mickey Gall. Three minutes later, Gall had at worst the second best win of his UFC career, and Williams had his first career submission loss. The finish isn’t the problem — Gall leads the UFC in rear-naked chokes among active 170-pounders and will likely extend his lead before all is done. The problem is in how they got there, as Williams, supposedly the better striker, waded into range with little or no setup and was tagged for his troubles over and over. He will get a mulligan on this one, as welterweight certainly seems to be the weight class for which he is best suited, physically, but he’ll never get this one back.


I suppose Saturday’s performance was a “stock down” moment for Heinisch only if, like me, you still thought of him as a Top 15 middleweight and fringe contender despite having lost three of four coming in. If you already saw the former Legacy Fighting Alliance champ sliding back into the pack at 185 pounds, then you may consider his stock to be holding steady.

Similarly to Williams’ loss to Gall, Heinisch’s second-round TKO at the hands of Nassourdine Imavov is problematic due more to the specifics than to the opponent, since Imavov appears to be a rising factor in the division. The main issue is that in consecutive fights against Kelvin Gastelum and Imavov, Heinisch’s preferred wrestling-based attack has caused him to tire before his opponent. Grinders can absolutely prosper at the highest levels, but it hinges on being able to wear the other man down. It now appears that Heinisch cannot make that approach work against the upper echelon of UFC middleweights.
« Previous Matches to Make After UFC on ESPN 27 Next Fight Facts: UFC on ESPN 27 »