Fights come in all shapes and sizes. Most end in the standard fashion; whether on the scorecards or by the frequent flier of technical knockout due to punches, the results are generally fairly simple to classify. We don’t want to talk about those fights. Instead, we take a trip into the bizarre, far from the mundane mata leon and into the more obscure. Sometimes, a fight-ending sequence deserves description with a note far more informative than TKO (Retirement) or No Contest (Fans Rioted) – although for the latter, we have that one covered.

Some other famous examples do not need a lot of explaining to get at the root of the matter. The oft-cited Submission (Terror) loss for Joe Son can be attributed to Son getting struck in the face and tapping out after seeing the sight of his own blood – other, more fantastical iterations of this tale claim Joe Moreira slapped him so hard, it cut Son. Tyler Bryan and Shawn Parker clocked one another at the eight-second mark of LOF 25 in 2008 to register an infamous No Contest (Double KO), before an ecstatic Shonie Carter inside a venue appropriately titled the 8 Seconds Saloon. Ilir Latifi’s takedown attempt on Blagoy Ivanov proved too destructive for the ring to contain his heavyweight strength at Real Pain Challenge 2 in 2008, resulting in a No Contest (Ring Broke) for the two early into their respective careers. Other times, it is not so simple. 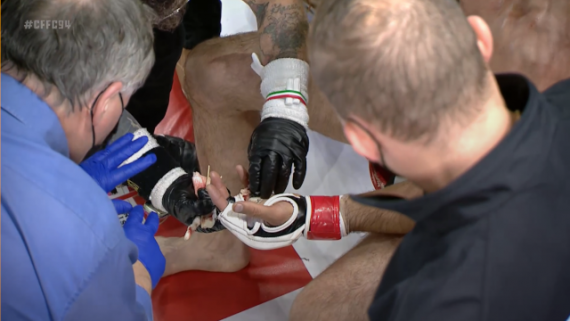 Don’t worry, Pliev will not need his nickname updated to “Digit.”


Recently, an MMA fighter lost a finger in a 180-pound catchweight contest at CFFC 94. You read that right. Khetag Pliev, an Olympic wrestler, faced off against Devin Goodale in the co-main event of this Philadelphia show. After suffering a broken finger from blocking a kick in their fight, it proceeded to snap off thanks to some glove grabs and gritty grappling exchanges. The finger did not fly off into the crowd as some initially believed, and just bent all the way back and still had a small piece of skin attached. The story does have a happy ending, as Pliev’s finger was successfully reattached, and he has no plans of moving on from the sport. In stereotypically unbreakable Russian fashion, Pliev went on to call out Ultimate Fighting Championship President Dana White, telling him that he would be willing to lose a finger to excel in this sport.

If you were in our shoes, how would you register that result? A technical knockout due to a finger injury would hardly suffice. Current UFC talent Julia Avila suffered a compound fracture in her finger when facing Marciea Allen in 2018, but the damage was nowhere near as brutal as Pliev’s – to wit, Avila competed less than four months later and punched out Ashley Deen. A doctor stoppage, while accurate, would lump this shocking situation in the same category as Thiago Alves’ badly broken nose at the behest of Carlos Condit, or Ross Pointon’s head-splitter courtesy of Marius Zaromskis. We needed something more, and “Severed Finger” felt too graphic. What would be descriptive enough to give a reader an impression of the result without having to see it? Pliev’s left ring finger detached from his hand, hence, TKO (Detached Finger).


Former rising UFC star and notorious wildman Diego Brandao, after leaving the promotion, went to Russia to try his luck overseas. After rattling off a pair of impressive stoppage wins, including an unusual helicopter armbar of Murad Machaev, the Brazilian squared off against Akhmed Aliev in the main event of FNG 73 in 2017, with his sights set on a future 155-pound title shot. The bout itself was otherwise unremarkable, until halfway through the second frame when Brandao grew tired of taking shots to the body.

“Ceara” shot in for a takedown, only to get bowled over by the Russian. Flat on his back, Brandao decided his best course of action was not to attempt a sweep, scramble out of position, open his guard or pursue any other reasonable option. Instead, he channeled his inner Mike Tyson and chomped on Aliev’s ear. Understandably, the man known as “Butcher” protested, but when his cries fell on deaf ears, he took matters to his own hands and headbutted Brandao in the chest. When referee Jan Vobornik intervened, Brandao got off an illegal upkick and elicited an angry reaction out of Vobornik. They were stood up, and the frustrated Brazilian started shaking the cage. Boos began to rain down, as restless fans pelted the three cage inhabitants with garbage. Brandao had had enough, and he quite literally abandoned the whole situation, climbing out of the cage and walking away through the incensed crowd. The official ruling? As Brandao left the fighting area, regardless of the fouls that had not yet been assessed, he lost via TKO (Retirement) at 3:44 of Round 2.

Do you have other indescribable results you would like elucidated? Send your requests, as well as all Fight Finder-related inquiries, to [email protected]