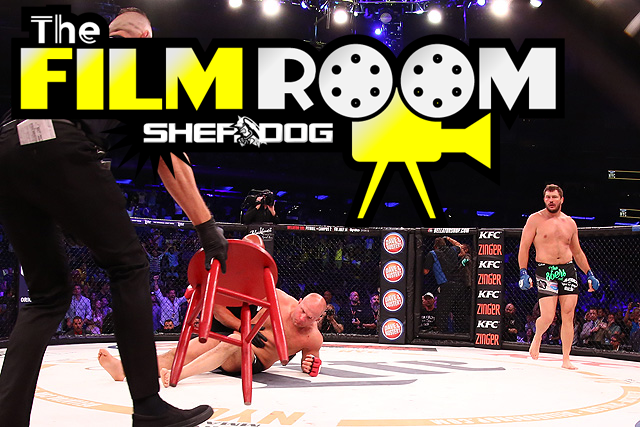 
Mitrione is a lifelong athlete and martial artist but he didn’t get into mixed martial arts until he was 30 years-old after an unsuccessful NFL career. Since he trained in Shotokan karate as a kid, following his NFL stint a friend asked him to fight in his inaugural promotion and Mitrione fell in love with the sport.

When Mitrione came onto the scene heavyweight fighters with his athleticism were far and few between. He was 6-foot-3, 254 pounds but was light on his feet and possessed the speed of a middleweight. Despite getting into the sport late, Mitrione dominated his first five fights with his athleticism alone and quickly developed the skills necessary to compete at the highest levels. Mitrione is a southpaw and when working on the lead he is always looking for the left straight set up by a leaping lead hook. The one knock on Mitrione's leading attacks is his lack of setups. Other than the lead hook to left straight, he often throws naked punches with no setups, which makes his strikes more predictable.

Although Mitrione is often seen as an aggressive leading attacker, his best work comes from working on the counter and the majority of his knockout wins were started with such. His go-to is a counter lead hook and he also has a beautiful intercepting jab that he uses to stop his opponents from coming forward. Very few people in MMA are adept at fighting off their back foot, especially heavyweights, but Mitrione is an exception.

Coming from a Shotokan background where leg kicks are as important as anything, Mitrione is always looking to chop his opponents down before opening up with punches. Despite being a great low kicker, he is open for leg kicks himself, which we saw in his fight with Cheick Kongo. He didn’t check a single leg kick and was unable to get off any offense due to his hindered movement.

On the feet, Mitrione can hold his own with the best, but once the fight hits the ground he looks lost. He was easily controlled on the ground by Kongo for much of their fight and was effortlessly caught in submissions by Brendan Schaub and Ben Rothwell. His grappling is a major concern for him this weekend as Bader is a dominant wrestler who rarely chooses to stand and trade. The major size difference between the two could help Mitrione defend takedowns, but if the fight hits the ground it could be all but over.