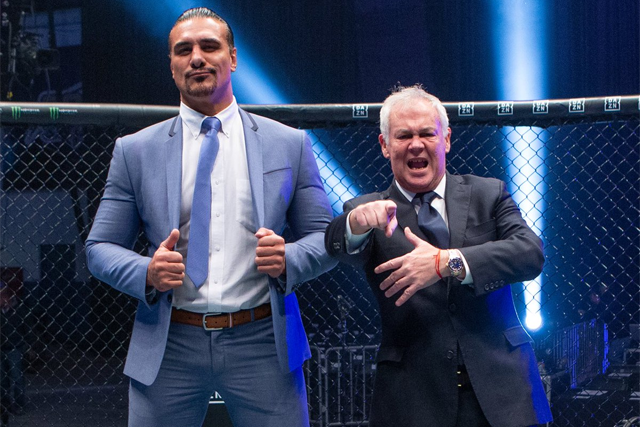 
Growth and progress remain goals for Combate Americas in its eighth year in existence, as it barrels towards Combate 32 on Friday in Guadalajara, Mexico. As one of the creators of the Ultimate Fighting Championship, Combate Americas CEO Campbell McLaren understands the concepts behind launching something new and unique.

The MMA market in 2019 remains a heavily populated environment, with the UFC, Bellator MMA, One Championship, the Professional Fighters League, KSW and Rizin Fighting Federation among the many promotions vying for the public’s attention. Standing out in the crowd is no easy task. However, McLaren and his team feel they have done so by foregoing the normal trappings of MMA promotion. Instead of trying to market to the general audience, Combate Americas caters to a specific demographic: Hispanics.

“It’s always been my premise to present MMA [in a] Hispanic style,” McLaren told Sherdog.com. “I think our style of MMA is different enough and exciting enough that non-Hispanic sports fans will like it, too.”

The organization has made significant strides in Spanish-speaking nations like Mexico and Spain, where its events draw viewing numbers comparable to or better than those the UFC gets in the United States. Combate Americas markets its product to a fan base that is over one billion strong and shares a common language, culture and love of combat sports. In the process of building its brand in Latin America and Spain, Combate Americas has not looked to get into direct competition with the UFC. Instead, it aims to be an alternative style of MMA that connects culturally.

“I think what Combate’s got is something unique,” McLaren said. “I think it’s our style of fighting. It’s the characters. It’s how we present the shows. It’s just feeling like you’re watching something that’s got great combat sports and is kind of fun to watch.”

Combate Americas has strategically built its roster to be action-oriented and uses the slogan of “mucho mas acción,” which translates to much more action. The promotion prefers fighters who are aggressive and want to strike, though it has no issue with grapplers, as long as they push the action on the ground. However, Combate Americas is not looking for fighters who grapple first and then strike, preferring to leave those pursuits to the UFC.

“The UFC’s MMA DNA is simple; it’s grapplers who learn to strike,” McLaren said. “Combate [fighters], pulling from the boxing martial arts tradition, are strikers who are learning how to grapple. I think that’s the difference that would be important going forward.”

Talent scouting and development are keys for any sports league and even more so for organizations that do not possess the UFC’s resources. Talent relations for Combate Americas requires a different approach from other United States-based MMA organizations. To keep in line with the theme of reaching Latin fans, the company needs to seek out and find Latin faces. In doing so, it has managed to mine regions of the world that may often go overlooked as a source for MMA talent. Mexico ranks first among those nations, as it has become a key source for prospective fighters. Under the direction of Vice President of Fight Operations Eduardo Vargas and with the assistance of league ambassador Alberto Rodriguez, Combate Americas regularly recruits from 25 gyms in the country, including the Bonebreakers Team.

“I know we are uncovering in Mexico the next-gen fighters,” McLaren said. “I think we’ve got the edge on everybody in Mexico.”

The promotion recently announced a signing that blended talent scouting and cultural significance, as it added professional wrestling star Dulce Maria Garcia Rivas, also known as “Sexy Star,” to its roster. The Monterrey, Mexico, native and former Lucha Underground champion holds a 5-0 record as a pro boxer. Her mix of pure athleticism, fighting experience and crossover appeal made the acquisition a no-brainer for McLaren.

“‘Sexy Star,’ she’s [expletive] awesome, man,” he said. “Why did we sign her? Because she’s great. She’s a great athlete. She’s an attractive woman, [and] she is notorious.”

The longtime promoter has no issues integrating former professional wrestlers into his company, as McLaren feels it blends well with the culture of fans to which Combate Americas caters.

“We really like wrestling in Combate,” he said. “It is part of the heritage. For us, it’s a cultural element here that’s a lot of fun.”

Spain has become another notable source for fighters. There, Spanish MMA and Combate Americas veteran Marc Gomez serves as the talent relations director. Gomez had to cut his Combate run and career short due to a detached retina. Instead of letting him go, the promotion saw value in his knowledge of the region and set him up as its lead scout.

“He’s glad to have a gig that keeps him in the business,” McLaren said. “He’s a great guy [and] he knows every fighter, so he’s bringing us real talent.”

The infusion of Mexican and Spanish talent will be showcased at Combate 32, as the promotion begins its two-part series of Mexico vs. Spain events. “The Ultimate Fighter Latin America” Season 2 graduate Alvaro Herrera will represent Mexico, as he faces Spanish prospect Ignacio Capella. Meanwhile, Vanesa Rico, a 12-time judo national champion in Spain, will meet Team Grasso member Alitzel Mariscal.

“It’s a fantastic fight card that builds on our narrative of athletes representing and fighting for their respective countries against each other,” McLaren said.

Aside from America’s immediate neighbor to the south and Spain, Combate Americas scoured South America in pursuit of an untapped hotbed of MMA talent. McLaren believes the company found that in Chile and especially in Peru. “The Chilean and the Peruvian fighters, they surprised us,” he said. “It was like, ‘Wow, there’s a lot of gems.’ That scene was much further along than we thought.” Peru, where Combate Americas plans to stage an event sometime in 2019, was particularly impressive. “[There are] 37 million people in Peru, [and] 35 [million] of them are rolling,” McLaren said. “It really shocked us.”

Combate Americas has gone to great lengths to get its product out to Spanish-speaking audiences, including Hispanic-Americans, having secured broadcast deals with Univision and Univision Deportes. Yet the company remains keenly aware of the fact that continued growth must include procuring fans who do not speak Spanish. In September, Combate Americas entered into a multi-year agreement to air English-language broadcasts on the DAZN streaming service. McLaren could not offer any information on how Combate Americas has performed thus far on the service, as DAZN has not yet shown him any specific statistics. However, he likes the deal because it offers the brand a chance to rub shoulders with other power players in the world of combat sports, from Bellator to pro boxing superstars Anthony Joshua and Saul “Canelo” Alvarez.

“What DAZN does for us is it gives us a great platform, regardless of ethnicity,” McLaren said. “If you like MMA, you got Bellator. If you like boxing, you’ve got ‘Canelo,’ [and] check out Combate. Those are pretty good sports offerings. If you’re a combat sports fan, DAZN seems like a pretty good value to me. I like being positioned in there.”

McLaren indicated he was also satisfied with Univision. He feels the network has a reach that remains underappreciated and prefers it to the deal One Championship signed with Turner Network Television and Bleacher Report Live.

“I’m not interested in an English-language cable deal,” McLaren said. “If we have a special event we are doing, I think I would take it maybe to Fox. I’m shooting pretty high.”

McLaren has taken issue with what he views as a lack of coverage from the media in Canada and the United States, and he has not been shy about voicing his displeasure.

“Combate Americas is now the only MMA organization on broadcast television in the U.S.,” McLaren said. “I’m not referring to cable television. I’m referring specifically to broadcast. Our show airs on Univision, as well as the network’s cable television platform Univision Deportes, [and on] DAZN. Yet we have been overlooked by a select group of journalists, for no reason that I can see, other than the fact that we embrace and celebrate a culture that might be new or unfamiliar to them. Therefore, they see it as not being worthy of their attention. I should probably point out that Spanish is the second-most spoken language in the world and that the Hispanic millennial demographic is the fastest-growing group in the U.S. This company aims to serve a billion fans globally. Does that sound niche or irrelevant?”

The Scottish emigrant has so much confidence in the reach of his broadcast partnerships that he was willing to predict Combate Americas would have better overall ratings than One Championship.

“By the way, I am so going to kick their ass on Friday,” McLaren said. “Mark my words, I will do 10 times the ratings they do.”

However, Combate Americas has not yet made its English-language deal with DAZN a primary building block for its future. “Is it necessary?” McLaren asked. “No, it’s not necessary because I’m not sure how many [viewers] we have now. DAZN hasn’t given me a number.” For McLaren and the promotion, the cultural connection made with fans remains far more important than the language they speak. In addition, he believes Hispanic-American fans will be drawn to the brand’s presentation, even if they are from a demographic in which English is their primary language. “Culture is more important to us than language,” he said, “so I think we are going to have a lot of Hispanics that don’t speak Spanish. Eighty-one percent of U.S. Hispanics under 18 speak English.”

Combate Americas plans to promote 18 more events in 2019. McLaren hopes to one day make the organization the second love of Hispanic sports fans, behind only soccer. He aims to do so by displaying an all-action style of MMA that supersedes language, unites through culture and comes off as different from the UFC.

“It’s a style of fighting that’s aggressive and coming forward,” McLaren said. “That’s what you get in Combate. I think as we grow and become more popular worldwide, the language won’t matter. I want Combate to be a distinct and separate product from the UFC.”
<h2>Fight Finder</h2>
Sponsored by