Kyoji Horiguchi returned from a year-long injury layoff on New Year’s Eve at Rizin 26 and looked to be in outstanding form. The former two-promotion champ killed two birds with one stone, avenging his 2018 loss to Kai Asakura while reclaiming his Rizin Fighting Federation bantamweight title. Next up for the 30-year-old Japanese standout may be a trilogy fight with Asakura, or perhaps a shot at regaining his Bellator MMA belt.

While Rizin, the spiritual successor to Pride Fighting Championships and Dream, has provided plenty of the pageantry and pandemonium we’ve come to expect from top-level Japanese MMA, what it has not provided much of thus far is champions defending their titles. That is partly by design. While Rizin has now existed for five years, most of its belts have been around for less than half that time, as the promotion stuck mainly to a tournament format early on. It is also due to Rizin’s fairly conservative schedule; with just 29 events in five years, Rizin simply hasn’t been able to develop enough contenders to keep its champions busy, even with its willingness to loan and borrow fighters.

Here is the brief and tumultuous history of the Rizin bantamweight title. It tells the story of a division with some dazzling individual talents, but which has struggled to establish itself as a stable, competitive entity. 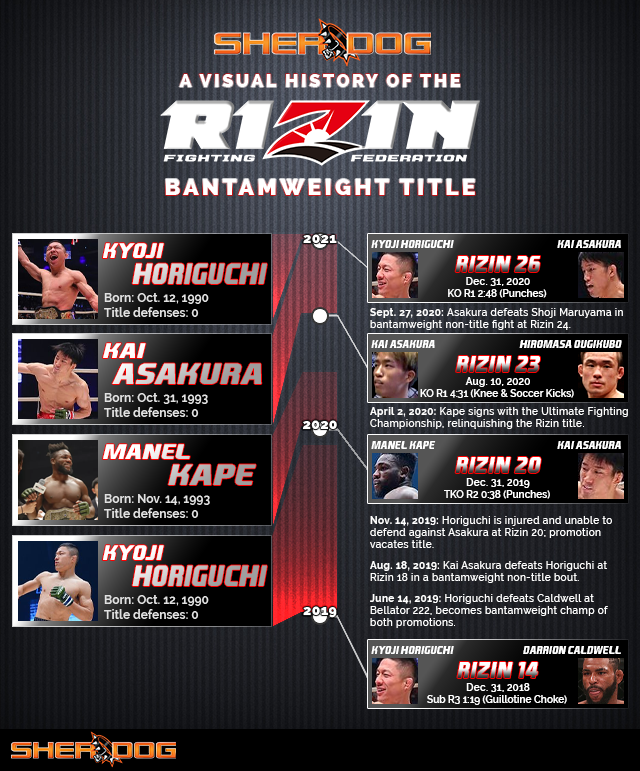